Arthur Curry aka Aquaman was often being ridiculed in the past by a lot of comic readers as his powers were not being perceived as cool, like to fish or to ride a seahorse. But this all changed when Jason Momoa (which you might know from Game Of Thrones as Khal Drogo) took on the role in the Justice League which was a brilliant move of DC. After that movie, we saw a lot of cool Aquaman merchandise rise to the surface.

This 8 inch beauty features Aquaman in one of his now quintessential designs, the Jim Lee costume from The New 52 Justice League comic. Made by premium Japanese collectible manufacturer Kotobukiya, the statue is sculpted marvelously in a powerful and stoic pose that captures the king of the seas perfectly. The armor has a metallic sheen that replicates the high contrast artwork from the comic pages. Aquaman’s feet are lined with magnets, helping you secure him to any metal base or platform while also offering weight and stability on other surfaces. Best of all, the price is a real steal. This is a must have for any DC fan! 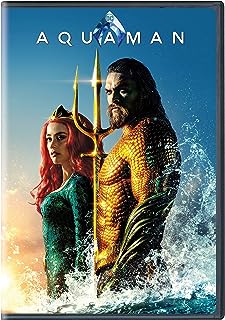 Based on the comic book character of the same name, Aquaman is a thrilling tale of action and adventure. Starring Jason Momoa, this well-reviewed superhero film gives viewers the chance to visit underwater cities as well as desert temples. This film is designed to be an origin story, which means that anyone can enjoy it, even people that aren’t familiar with the character. The movie boasts incredible special effects and has appearances from major stars like Nicole Kidman and Willem Dafoe. The film has a runtime of 2 hours and 23 minutes and is subtitled in both English and Spanish. 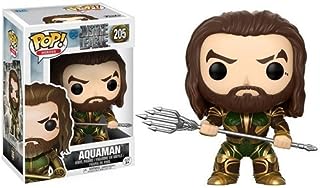 Of all of the recent live action bouts from DC, Aquaman has been one of the most well adapted characters. The Jason Momoa depiction of the king of Atlantis has been a hit with fans and critics alike while also magically proving to naysayers that the aquatic super hero can indeed work on the silver screen. A wave of merchandise was always sure to follow, and Funko are obviously never ones to miss out. Released to promote the Justice League film, their pop vinyl lineup was blessed with this fun Momoa-esque Aquaman. Any Pop collector should know what to expect by now, but rest assured this is a good one. 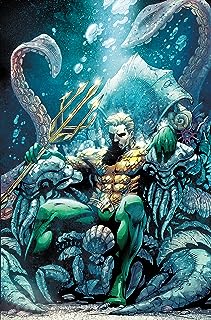 If you’re a fan of Aquaman, this is a comic book run that you won’t want to miss. Written by Geoff Johns, with art from Ivan Reis this beautiful hardcover omnibus includes 25 issues of Aquaman as well as three issues of Justice League. While Aquaman’s adventures are ongoing, you’ll find several complete stories within this omnibus. It’s a perfect jumping on point for new readers, and it’s a great read for long-time fans of the character as well. This critically-acclaimed comic book run is full of twists and thrills, as well as many multi-paged spreads showcasing beautiful underwater worlds.

Aquaman by Peter David Book One 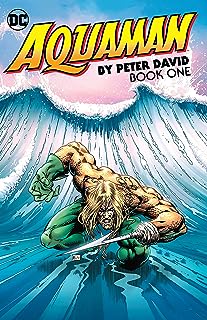 While many comic book writers have penned Aquaman, there are few writers that have achieved the same level of acclaim as Peter David. David’s run on the comic is considered to be iconic, and now, you can experience it for yourself in this collection. The volume collects Aquaman: Time and Tide 1-4 as well as Aquaman 0-8. The collection also features a brand-new introduction from David himself. This volume features 320 pages of action-packed story and full-color artwork. David helped to define Aquaman and make him into the character that he is today. This volume is the perfect way for you to experience this run from the start.

The Adventures of Aquaman: The Complete Collection 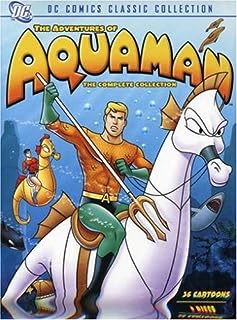 Introducing The Adventures of Aquaman: The Complete Collection, which is a must-have for anybody that is a fan of cartoons based on comic books or those who simply love Aquaman. This complete collection consists of 36 Aquaman cartoons that you will love. The 36 episodes are all in air-date order. One of the best things about the collection is your favorite characters are in it. Of course, this includes Aquaman, as well as Aqulad, Tusky, Storm and Imp. You’ll be on the edge of your seat watching these heroes battle it out with the likes of Devil Fish, Volcanic Monster and the Ice Dragon. If you want to be entertained, then buy this DVD set today. 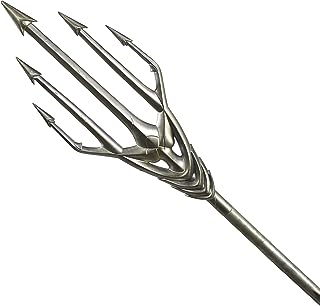 Fans of the DC universe and Aquaman in particular are going to need to clear some wall space, stat! Coming in at 74 inches, this full scale replica of Aquaman’s trident is a true sight to behold. It perfectly recreates the design from the live action version of the character, making it a must own for any tried and true DCEU fanatic. Anyone with an interest in prop replicas or even cosplaying will also turn their heads at this beauty. Fortunately, the trident can break down into three pieces for easier storage or moving; this is going to be a life saver! Best of all, the price is incredibly fair in comparison to other replicas of its kind. It’s hard to go wrong here. 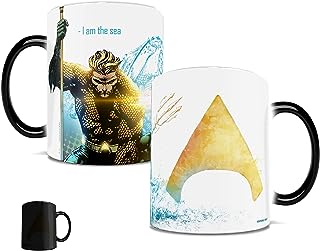 Do you love comic books enough to adorn your morning coffee cup with them? Of course you do! If you love the DC universe in particular, this Aquaman mug might be right up your alley. It features some slick modern artwork in a collage style, along with some other recent graphics representing the famous Atlantean hero. It holds 11 ounces of any beverage, and its ceramic build will be sure to keep your coffee and tea warm. It’s best enjoyed at home of course, but it will certainly set you apart in the office if you’re allowed to keep your own apparel in the communal cupboard! 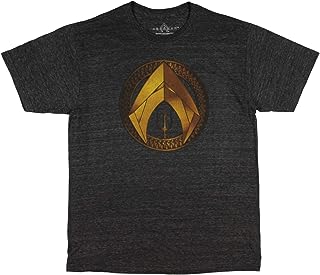 If you’re a big fan of the DC Comics character Aquaman, you’re going to want to have this licensed graphic tee in your wardrobe. Although the shirt’s design is fairly subtle, the gold logo will be instantly recognizable to anyone that loves Aquaman. The shirt is bad from a tri-fabric blend that’s extremely soft and resilient. It comes in an appealing heather gray color that will go with just about everything. This shirt is available in men’s sizes small through large, but it can be worn by women as well. It runs true to size and will not shrink when washed. 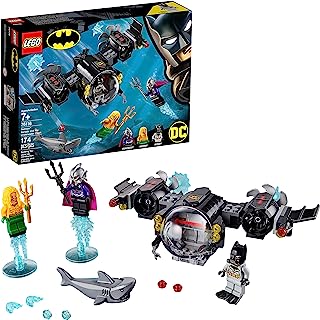 If there is one thing you can trust, it is the quality of LEGO. Combine this with some of the most renowned heroes from DC and a whole new world opens up for kids. This particular set features the dark knight himself, Batman, as well as the king of the ocean, Aquaman. And to help create some controversy, Ocean Master is included too. Customize your characters while you build the coolest submarine. What makes it so cool? Well, it features adjustable claws, rotating propellers, and even stud shooters. In fact, the set is so cool, adults are likely to get hooked on it too. 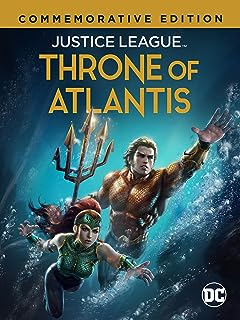 If you’re interested in seeing more of Aquaman’s adventures, this animated film is a must-see. The movie features the voice talent of a number of well-known actors, including Nathan Fillion, Jerry O’Connell, and Christopher Gorham. The film is set after the events of Justice League War, but the movie can be enjoyed by viewers that have never seen a DC animated film. The film is rated PG-13 and has a runtime of 1 hour and 12 minutes. Whether you choose to purchase this film for your collection or opt for a rental, you’ll be thrilled by this animated epic from start to finish. 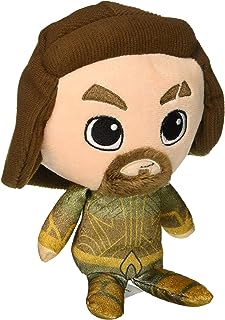 For most of us speaking with the denizens of the deep can only be a dream. However, the Mrvel Universe has brought the deeps to our fingertips and our hearts with the Aquaman Plush. It’s perfect for the lovers of the deep blue sea and at 8 inches tall this plushie is simply perfect for those who want tobe the ultimate fan of theKinkofthe ocean – plus that wonderful feel andhuggablity is the things that salt water and beach sand are made of – simple joy. Thiisis the perfect gift for the lovers of the Marvel Universe – and the Lord of the Ocean – Aquaman. 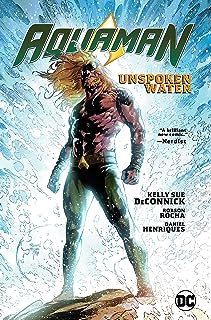 You may think that you know Aquaman. However, in this comic book collection, Aquaman doesn’t even know himself. Arthur has washed up on an island with amnesia, and while he can’t recall his past, the village that he’s in seems a little strange. Written by Kelly Sue DeConnick, with art from Robson Rocha, this story is packed with twists, thrills, and intrigue. It takes place after the ‘Drowned Earth’ epic, but is still a suitable jumping on point for new readers. The volume features a complete story and visually stunning artwork. This volume collects Aquaman 43-47 and is 141 pages in total.

The DC Comics SV215 Justice League Aquaman Statue is a one of a kind action figure that every superhero fan should have. Made by the world renowned Japanese toy company Kotobukiya, this action figure is designed with both appeal and functionality in mind. The statue has a 1:10 scale ratio and measures 2.99 x 1.97 x 7.48 inches. The Aquaman statue is made from high-quality plastic. It comes with special magnets that are placed under Aquaman’s feet for optimal stability when on display on the included metal base. Both the face and costume of the character are precisely designed to match those of the real actor. This Aquaman statue is excellent for teenagers and young adults.

Looking for Superman Gifts? Clark Kent aka Superman is considered the strongest and fastest superhero of the whole comic universe. He was created by Jerry…

Are you a fan of Batman? Batman might be your coolest superhero today. Even me, he is my coolest hero. This is because he has…

The Joker is probably the most popular super-villain on the planet. His iconic laugh and incredible brutality has surprised us over and over again. Together…

I just love it when Harley Quinn calls the Joker, Mr. J. It just has a great ring to it. Therefore, we were so excited…