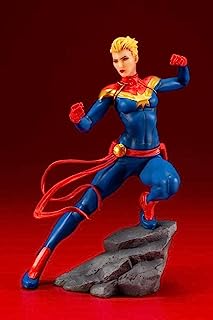 If you have longed for any of the many stylish sculptures from Kotobukiya in the past only to be dissuaded by the price tags or size, this may be just what the doctor ordered. This Kotbukiya Captain Marvel statue has been made in a much smaller scale than the company’s standard fare at only around 5 by 4 by 7 inches, and the price is accordingly much easier to budget. The impressive sculpting is still in full force however, and the modern look of the character has been loyally recreated. Any major fan of the Marvel universe is sure to love it! 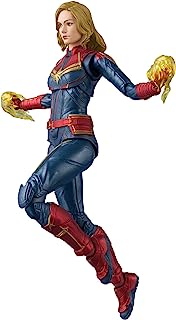 Tamashii Nations has come through again with yet another western SH Figuarts release. This time, the Marvel Cinematic Universe Captain Marvel is in the spotlight. This is a roughly 6 inch action figure sporting a reasonably high quality likeness of the character straight from the film. Great care was taken to recreate the costume in particular, and there are several interchangeable parts that provide alternate posing options and the character’s super powers. The most accessible collection of Marvel action figures is Hasbro’s Marvel Legends line of course, and this figure will fit right in if you’ve been picking up those releases as well. 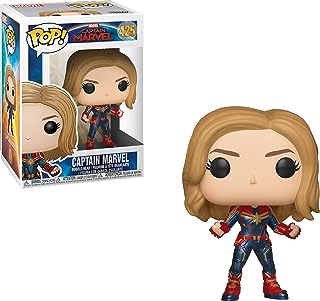 Marvel is one of the longest running licenses for the Funko brand, so of course it’s no surprise to see them dip into the Captain Marvel well! This Pop vinyl is of course based upon Captain Marvel from her titular solo film released in 2019. The costume is very true to the modern comic design however, so it will work for fans that aren’t as interested in the “Marvel Cinematic Universe” as well. It is a fairly standard looking figure for the line, but its simple yet powerful pose captures the character perfectly. If you’re already on the Funko Pop train, this will be a fine addition to the collection. 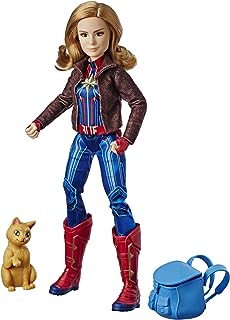 This doll, which stands 11.5 inches high, is the perfect gift for children that love Captain Marvel. The toy is designed to resemble the comic book character and features the same costume that Carol Danvers wears in the 2019 movie. It also comes with several appealing accessories, including a backpack and a replica of Goose the cat. The doll has soft blonde hair that is perfect for brushing. It also has 15 points of articulation, which means children can recreate all of their favorite action poses! The toy can be enjoyed on its own or used alongside other Marvel comics inspired toys. 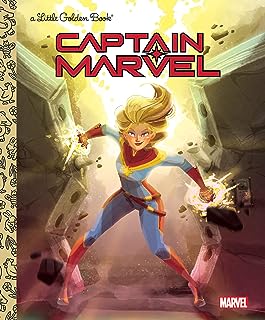 If there’s a child in your life that isn’t quite old enough for comic books, you may want to introduce them to the world of superheroes through this adorable children’s book! This story, which is suitable for children between the ages of 2 and 5, chronicles the origins of Captain Marvel and shows her facing off against some of her most iconic foes. Throughout the book, children will be able to see Captain Marvel use her powers of flight and super strength. It features an engaging story from writer John Sazaklis as well as beautiful art from illustrator Penelope R. Gaylord. 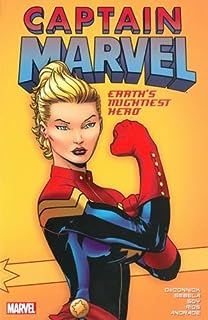 While the character of Captain Marvel has a long history, she became the hero she is today thanks to the work of writer Kelly Sue Deconnick. Now, you can read about the adventures of Earth’s Mightiest Hero in the first volume of this incredible collection. This trade paperback features art from Emma Rios and Dexter Soy. While Carol Danvers is the main character, plenty of other beloved comic book characters make appearances as well, including Monica Rambeau. This is a bright and colorful comic adventure that’s sure to keep you engaged from start to finish. You’ll love seeing the debut of the Banshee Squadron. 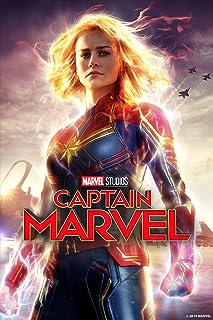 If you’re investing in Marvel’s cinematic universe, you won’t want to miss Captain Marvel! This film, which features Brie Larson and Samuel L. Jackson, is set in the 1990s. It follows Carol Danvers as she discovers that she is one of the most powerful heroes in the universe. The movie, which was released in 2019, has a PG-13 rating. When you choose to watch this film, you’ll also have access to hours of bonus content, giving you a peek behind the scenes so that you can learn more about this movie’s development. Like all of Marvel’s movies, it has plenty of action, humor, and heart. 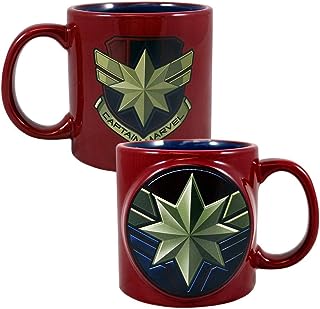 Whether you’re drinking coffee, tea, or hot chocolate, you’re going to want to enjoy beverages in this beautifully designed mug. The ceramic mug is designed to resemble the badge that Captain Marvel wears. It holds 20 fluid ounces and comes in a beautiful gift box. To prevent damage, the mug can only be hand washed. This is a sturdy, high-quality mug with bright and bold colors that really stand out. It features unique details and is comfortable to hold and use. It can be used on a regular basis or displayed. It’s a practical present that can also be a nice gift for collectors. 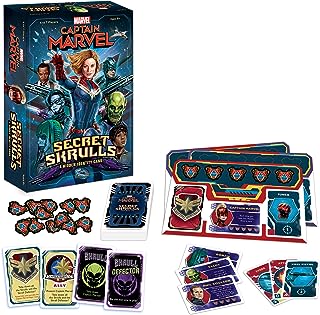 Skrulls are shapeshifters that can take on the appearance of anyone. How do you know who is a Skrull and who isn’t? Now, you can search for Skrulls in this entertaining, Captain Marvel-themed game. This game gives players the chance to step into the shoes of their favorite Marvel characters so that they can protect Earth from the Skrull threat. Because the game is all about hidden identities, players will have to form alliances and decide who they want to trust. This entertaining card game can be played by children, teen, and adults. It’s suitable for 4 to 7 players and can be completed in around 30 minutes.

Captain Marvel is one of Marvel’s most beloved female characters. This officially licensed costume gives people the chance to be Carol Danvers for a day. The long-sleeved costume is specifically modeled to look like the one that Captain Marvel wears in the Marvel Cinematic Universe. It includes both a stretch jumpsuit, gloves, and a belt. The bottom of the jumpsuit features red boots, which means shoes do not have to be purchased separately. The colors are very vivid and the costume is made to be comfortable to wear, even for longer periods of time. Thanks to the zipper in the back, the costume is easy to get on and off.

When the weather grows cold, it’s important to find ways to stay warm and cozy. This fun and playful blanket is the ideal way to beat the winter blues. This sleeved blanket features Captain Marvel. When someone slips this blanket on, they’ll look like they are wearing a superhero costume! The multicolored blanket is made from 100% polyester and provides plenty of coverage. Since the blanket has an opening in the back, it’s easy to slip on or off. The blanket is machine washable and measures 48 by 71 inches, which means that most people will be able to wear the blanket without any issue. 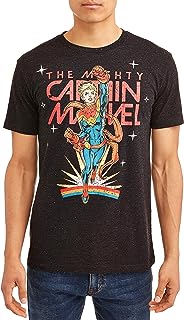 If you love comic books — or comic book movies — there’s a good chance you want to wear clothing that features your favorite characters. This stylish black t-shirt is perfect for anyone that enjoys Captain Marvel. The officially licensed shirt is made from a breathable cotton and polyester blend and features a bright and colorful design. The material is soft, and the t-shirt is machine washable. While it comes in men sizes, it has a tighter fit and can be worn by anyone that enjoys the character. It’s an unusual shirt that is sure to stand out and catch people’s attention. 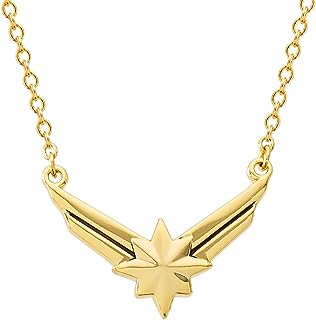 This officially licensed Marvel necklace is an incredible accessory. The 18-inch necklace is made from gold-plated brass. It uses a lobster claw clasp so that the necklace can be worn securely all day long. At the bottom of the necklace, you’ll find a stunning pendant that is designed to look like the Captain Marvel logo. It features an eight-pointed star and will be instantly recognizable to fans of the character. It comes in a lovely gift box, which makes it a perfect gift for any occasion. This is an affordably priced and well-designed piece of jewelry that is perfect for everyday wear. 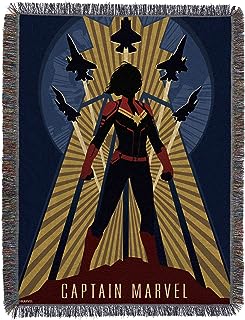 This beautifully-made blanket measures 48″W x 60″L. The stand-out design looks like it could be a real comic book cover and features the beloved character Captain Marvel. The woven blanket can be used as a piece of decor or as an ordinary blanket. It is made from 100% polyester and is machine washable. The decorative fringes around the edge of the blanket help to give it a more distinctive design. Whether you hang this on your walls or huddle beneath it when the weather gets cold, this comic book-inspired blanket is an item that you’ll want to have in your home. 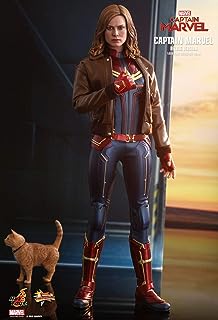 Although their price tags tend to pack a punch, most savvy toy collectors know that Hot Toys is perhaps the premiere manufacturer of high quality, premium collectible figures. They produce 12 inch figures with realistic clothing that stretches and folds much like actual cloth and fabric would, all while maintaining clean lines and allowing plenty of room for movement. This is no small task, as most companies providing real clothing for their action figures tend to cut a lot of corners. This deluxe version of Captain Marvel is high quality all the way, with plenty of additional parts and one of the best screen-accurate likenesses you will find anywhere.

Looking for X-Men Gifts? The first issue of X-Men was released in September 1963. The big difference about the X-Men was that were part human…