Matt Murdock got into an accident when he was a kid where he was blinded by a radioactive substance. Although, he was not able to see after the accident, he started to develop super human abilities when it came to his senses. Not commonly known is that Daredevil is also part of the New Avengers and SHIELD but he is not as popular like Spider-Man.

I’m not going to spoil the rest if you haven’t read the comics or seen the tv-series which are great by the way. Don’t get scared by watching the Daredevil movie with Ben Affleck because I wished we could have erased that from every existing (but you should still secretly watch it, it is the worst superhero movie ever!). When it comes to Marvel gifts, we couldn’t have left out some cool Daredevil merchandise. 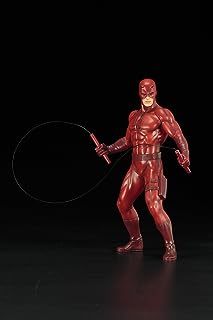 This incredible figure from Kotobukiya is a great buy for comic book fans. The statue, which is inspired by a sketch from artist Dale Keown, is a part of the ArtFX+ Defenders series. The figure can be displayed on its own or alongside other members of the Defenders, such as Iron Fist and Luke Cage. The statue is made from PVC and is beautifully painted. There are magnets in the feet of the statue so it will always remain upright when standing on its metal display base. The toy even comes with a customizable billy club wire! This is an amazing collectible that’s sure to be appreciated. 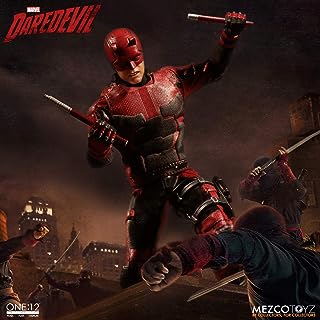 Straight out of Mezco Toys, the red Daredevil Action Figure is available! After a freak chemical spill accident, Matt Murdock was blinded but got superhuman senses, which makes him ‘see’ the world differently. By day, he upholds the law as an attorney, and at night, he roams around the streets of Hell’s Kitchen handing out vigilante justice. This action figure is 6. 5″ tall with a scale of one:12 and comes with a detailed costume outfit. It comes with 28+ points of articulation with si interchangeable hands to make the movements more realistic. There’s also a set of classic Billy clubs. 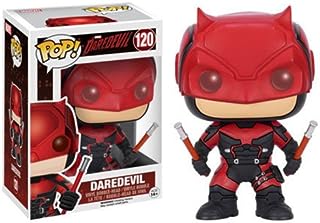 Whether you have been collecting Marvel memoribilia for years or have just started, we found something that you just have to add to your collection. By now, you more than likely have seen the possibly thousands of Funko Pops that are available for just about every movie and television show you could imagine. Now you can add the impressive DareDevil Funko Pop into your Marvel collection for an item that truly stands out. Featuring his iconic red suit, this Funko Pop is ready for action and the chance to leap off your shelf and directly into the heat of Hell’s Kitchen! 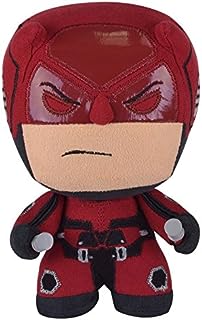 If you’re a big fan of Daredevil, you’re going to fall in love with this adorable Funko Fabrications plush toy! The plush has a rotating head and stands 6 inches high. It has the same design as other toys in the Fabrications line, which makes it a great addition to your collection. The toy even comes in Funko-style packaging, which means you can choose to display the plush in its box! With an affordable miniature design and appealing details, this is a wonderful gift for anyone that loves Marvel comics. This plush is suitable for children aged 8 and up. 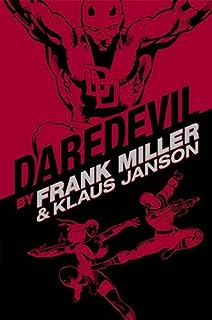 This 840 page Daredevil omnibus is a must have for any fan of Marvel comics and the superhero comic book genre in general. Collecting issues 158 through 161 and 163 through 191 of the famous blind hero, this run by Frank Miller and Klaus Janson is easily among the most revered in the character’s entire history. It is especially notable given the introduction of major players such as Elektra, Stick, and the Hand ninja clan, as well as incredibly memorable appearances by villains like Bullseye. The Daredevil Netflix show borrowed many elements from this particular set of stories. If you’d like to see where it really all began, you can’t miss out on this impressive release. 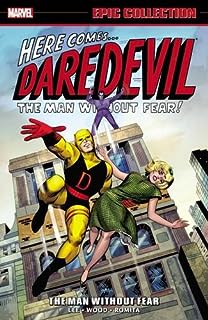 If you are interested in Daredevil, this is the place to start. The book collects the first twenty-one stories ever told in a sturdy paperback book. Daredevil has his very first battles with Gladiator ( Melvin Potter), Owl, and Electro. These are quite entertaining stories from the past of Daredevil. This is his start in the Marvel Universe. Kids of any age would enjoy these very gripping and fun to read stories. It is so refreshing to read the early works of Daredevil. The Epic comes with a wealth of bonus materials including original art pages from Romita & Everrett as well as Wally Wood’s reference sheets. 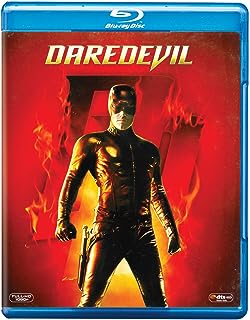 Whether you’re a big fan of the 2003 Daredevil film, had mixed feelings about the movie, or have never seen had the chance to before, you’ll definitely want to check out this director’s cut of the film! While the theatrical release received mixed feedback, this is a longer version of the film with more action and a deeper storyline. The movie features plenty of classic Daredevil characters, including Matt Murdock, Foggy Nelson, Elektra, and Kingpin. Colin Farrell also appears in the movie as the villanous Bullseye. Now is the perfect time to revisit the best version of this film on Blu-ray. 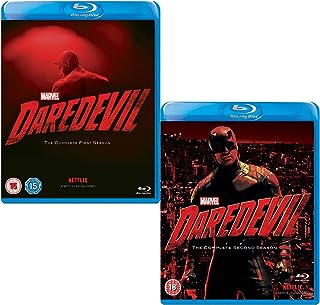 The critically acclaimed Daredevil series, which featured Charlie Cox in the role of Matt Murdock, was a huge hit with audiences. Now, you can watch the entire series without a Netflix subscription. This Blu-ray collection includes both seasons of this action-packed show. There are eight discs in total, and the complete run time is 1,404. Over the course of the series, you’ll be able to watch Daredevil face off against iconic villains like Kingpin and Electra. The collection does not come with any special features or commentary tracks, but the discs are nicely packaged, making them suitable to add to your Blu-ray collection. 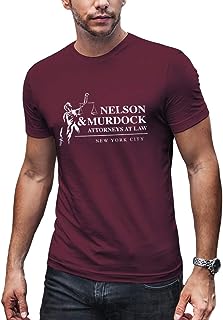 Daredevil has faced off against some of the most fearsome villains in the Marvel universe. By day, however, he is attorney Matt Murdock, who works with fellow lawyer Foggy Nelson. This short-sleeved t-shirt is a clever reference to Daredevil’s real-life identity. The maroon shirt, which is printed on a soft, high-quality cotton, looks like an advertisement for Matt and Foggy’s firm. Wearing a shirt like this can be a great way to meet comic book fans that love Daredevil as much as you do. The shirt is designed and printed in the USA and is machine-washable, which means you can wear it to your heart’s content. 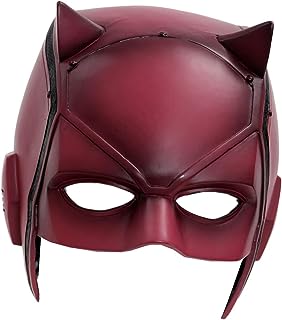 Daredevil — aka Matt Murdock — is able to conceal his identify thanks to the distinctive mask that he wears. Not only does his mask conceal any identifying features on his face, but it gives him an imposing look. This mask is the perfect way to complete a Daredevil costume. It has all of the details you could want from a costume like this, including the little devil horns at the top of the helmet. The mask is made from PVC, which makes it durable and comfortable to wear for an extended period of time. It’s also easy to adjust so that you can get the perfect fit. 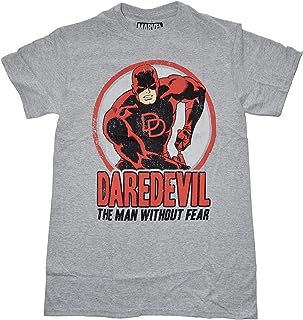 Daredevil is known for being “the man without fear.” If you want to feel as fearless as Daredevil, you may want to pick up this officially licensed shirt. The t-shirt, which is made from a cotton/polyester blend, is machine washable and comfortable to wear. It features an image of Daredevil, a bullseye, and a slogan that any Daredevil fan will recognize. Since the shirt comes in a neutral shade of gray, you’ll be able to wear it all the time. This high-quality t-shirt makes a great gift for comic book fans, and it’s also a terrific option if you’re looking for a present you can give yourself.

Whether you are a lawyer by day and a crime fighting vigilante by night, these Matt Murdock Sunglasses are going to look stylish and cool. We are going to offer you the chance to steal this signature look from Hell’s Kitchen number one lawyer, Matt Murdoch. Blinded at a young age, Matt chose these stylish sunglasses and they have become part of his iconic look. Manufactured by Magnoli Clothiers, these deep red sunglasses are the perfect fit for a Matt Murdoch cosplay event or to look stylish for a night out on the town. Grab a pair and start your own watch of Hell’s Kitchen! 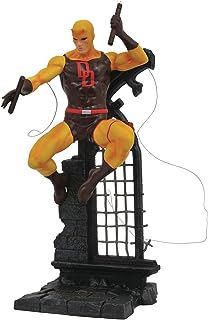 This yellow Dardevil statue hails from Diamond Select Toys, long time manufacturers of many a fine Marvel product over the years. As expected, it features a beautifully sculpted dynamic pose that perfectly captures the action and excitement you’ve grown to expect from the pages of the devil of Hell’s Kitchen. Base included, the statue comes in at 11 inches tall, making it a fine display piece that will definitely draw the eye. This is the original DD costume as designed by artist Bill Everett, and it looks every bit as classic as ever. Coming in at a low price point, this is a purchase that you won’t regret. 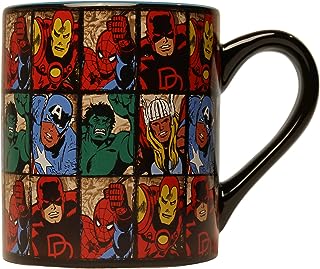 How big of a fan of the Marvel movies are you? Perhaps you consider yourself to be one of the biggest? If so, your collection is not complete until you have the ultimate mug for your collection. This incredible Marvel comics mug features, Iron Man, Thor, DareDevil and Captain America in bright colors. Whether you choose to leave this on your shelf as part of a collection or it brings a smile to your face with your morning coffee, it is going to be one of your best comic book themed purchases. As we all know, you can never have too many great looking mugs! 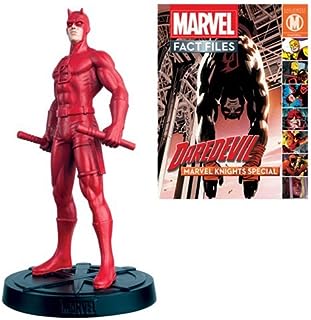 Add this special Marvel Factfiles edition to your collection. Factfiles #15 is devoted to Daredevil, the man without fear. The package includes a stunning 5-inch Daredevil figurine and a 20 page comic devoted to the hero himself. Learn about Matt Murdock’s alter-ego and what motivates the blind superhero thanks to this booklet full of facts, stats and illustrations. Ideal for Marvel collectors and those who are a fan of Daredevil in particular, this quality figure makes a great gift or a collector’s piece to display on your desk. Check out the other Factfiles for more of your favorite Marvel superheroes.