I have a real love-hate relationship with Donkey Kong. I hated him for throwing barrels at my Mario while we were trying to save Princess Peach. But I completely loved him as soon as I started to play Donkey Kong Country. So as you can see if we would be in a Facebook relationship, it would be stated as complicated. Still, Donkey Kong is super popular with people young and old. He even at some point got his own TV show which could have been better in my opinion. But as a homage a created this list with my favourite Donkey Kong Merchandise.

Be sure also to check out our post with our favourite Super Mario Gifts. 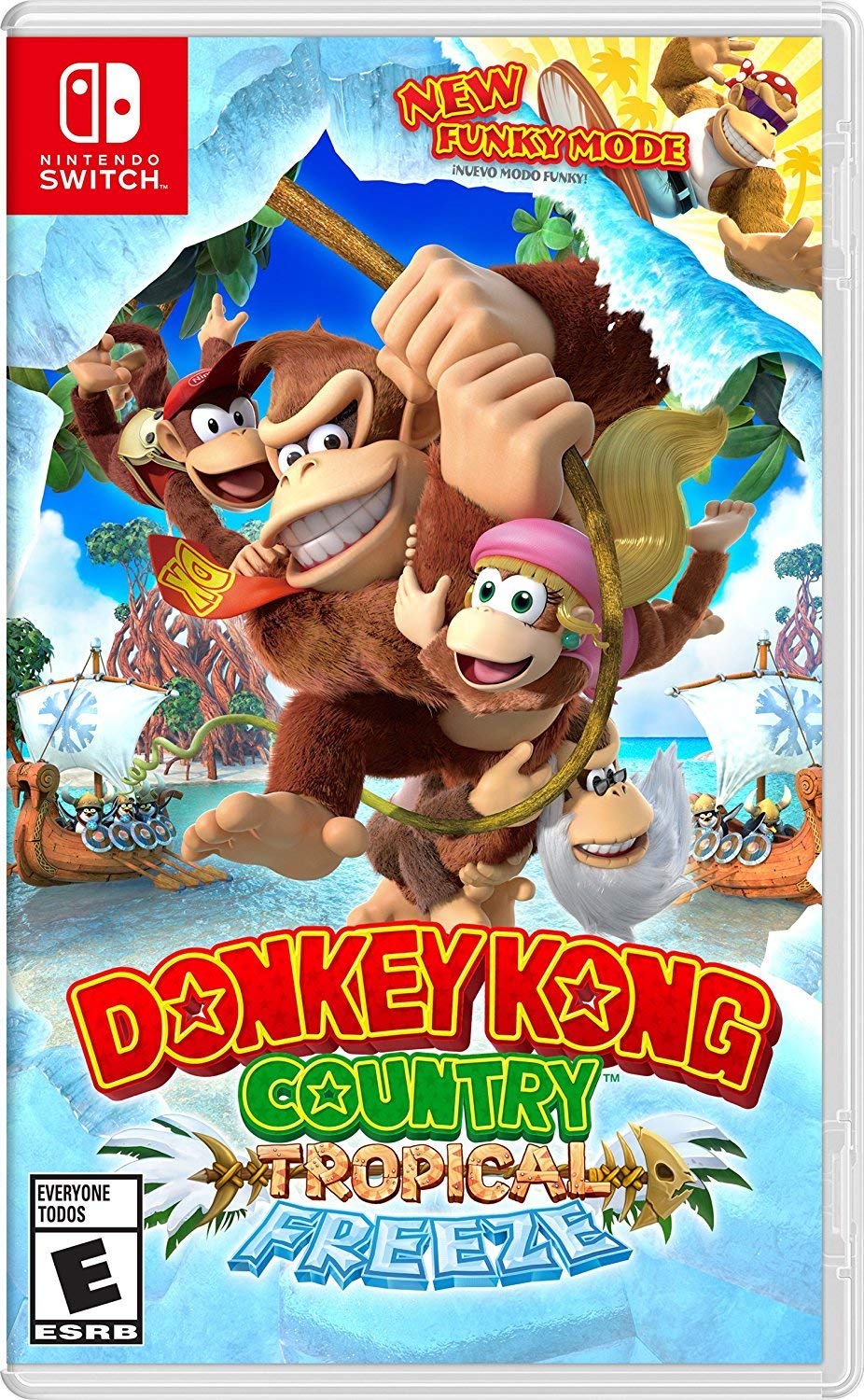 Originally released for the Nintendo Wii U in 2014, Switch owners can now enjoy the fun of Donkey Kong Country Tropical Freeze themselves. Whether you played the original or you’re only just joining in, this is undoubtedly one of the strongest first party titles on the console. All of the platforming magic that made the original Donkey Kong Country series a hit has been captured yet again, with plenty of new mechanics to keep things fresh. The visuals and music are also just as gorgeous as you could hope for. Best of all, the Switch version offers new modes and content to reinvigorate the experience for those that gave the game a spin the first time around. This is one you don’t want to miss! 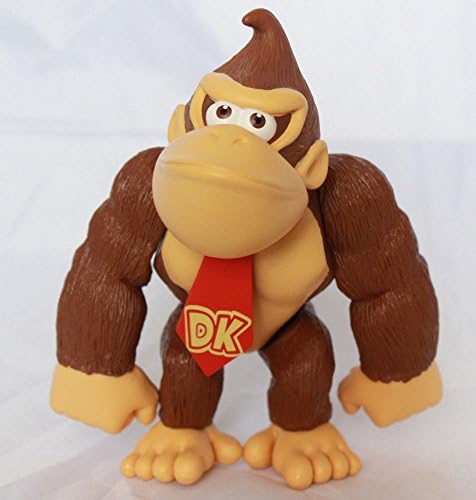 Within the ever growing pantheon of world famous Nintendo characters, Donkey Kong is every bit as important as Mario and Luigi, Link and Zelda, Samus, and every single Pokemon around. If you’re looking to create a fun display of video game toys, it’s imperative that you include everyone’s favorite tie-wearing giant ape. This particular figure shows DK in his now default Donkey Kong Country design, a look that will be all too familiar to you if you’ve played as him in recent Mario Kart, Mario Party, or Smash Bros games. After a deep dive through the listing, you can expect your purchase to come in a simple poly bag which might not contain any accessories, but the figure itself is large and poseable enough to display quite nicely. The craze over the Donkey Kong Country series of games reached such a fever pitch in the mid 1990s that a television series was absolutely inevitable. Airing throughout the world in a myriad of countries, the computer animated DKC show won the hearts of countless video game loving kids. It ultimately ran for two seasons that come to 40 episodes in total. Now that it’s been preserved for streaming on services like Amazon Prime, you can relive the magic yourself or introduce the series to your little ones. Each episode is packed with silly fun and one memorable character after the next. It’s well worth going down memory lane for this one! 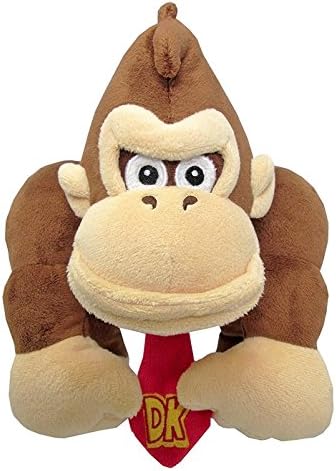 Perfect for DK fans of any age, this Donkey Kong plush is a moderately sized, adorable stuffed toy that accurately captures the modern look of the character. It would be right at home atop a video game themed bed for your kids or the couch in a gaming room. After several successful solo titles and plenty of appearances in games like Mario Party and Smash Bros, this is one of Nintendo’s most well known and popular characters. If you’re looking to spice up your video game collection with something a little more exciting than row after row of console game cases, this is a great way to get started. 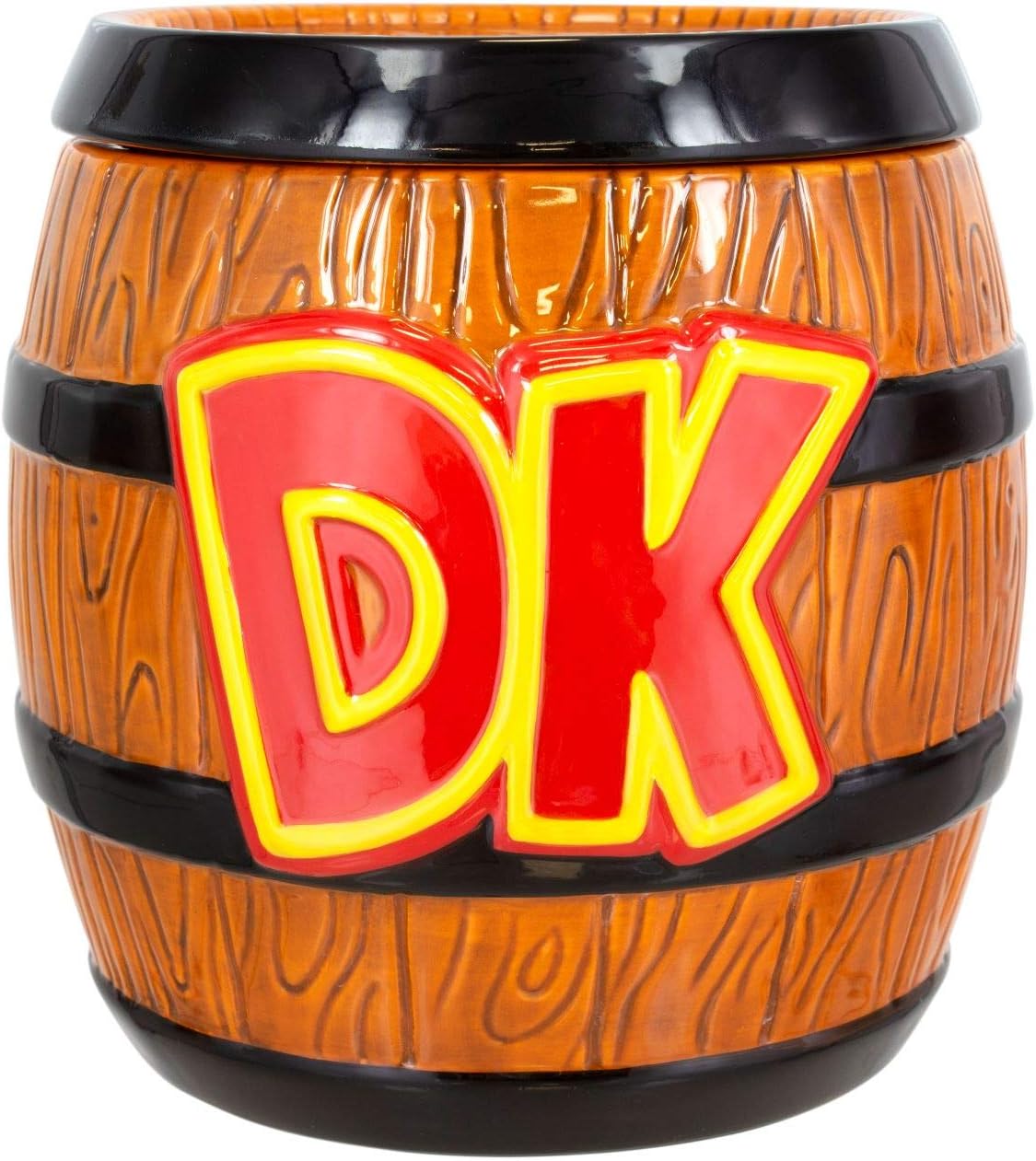 This Super Mario Donkey Kong cookie jar from Paladone is officially licensed Nintendo merchandise. It is inspired by the iconic DK barrel from the infamous retro arcade game. It’s comes boxed, which makes it a great collectable for fans of vintage Super Mario Bros. video games. Meanwhile, the keep-fresh, high-suction lid ensures biscuits stay dry and crunchy. A great novelty gift for Donkey Kong fans, treat lovers and family bakers alike. The cookie jar is ceramic, so it can also serve as a quirky plant pots for geeks. The heavy, solid nature of the jar ensures it will last for years to come. 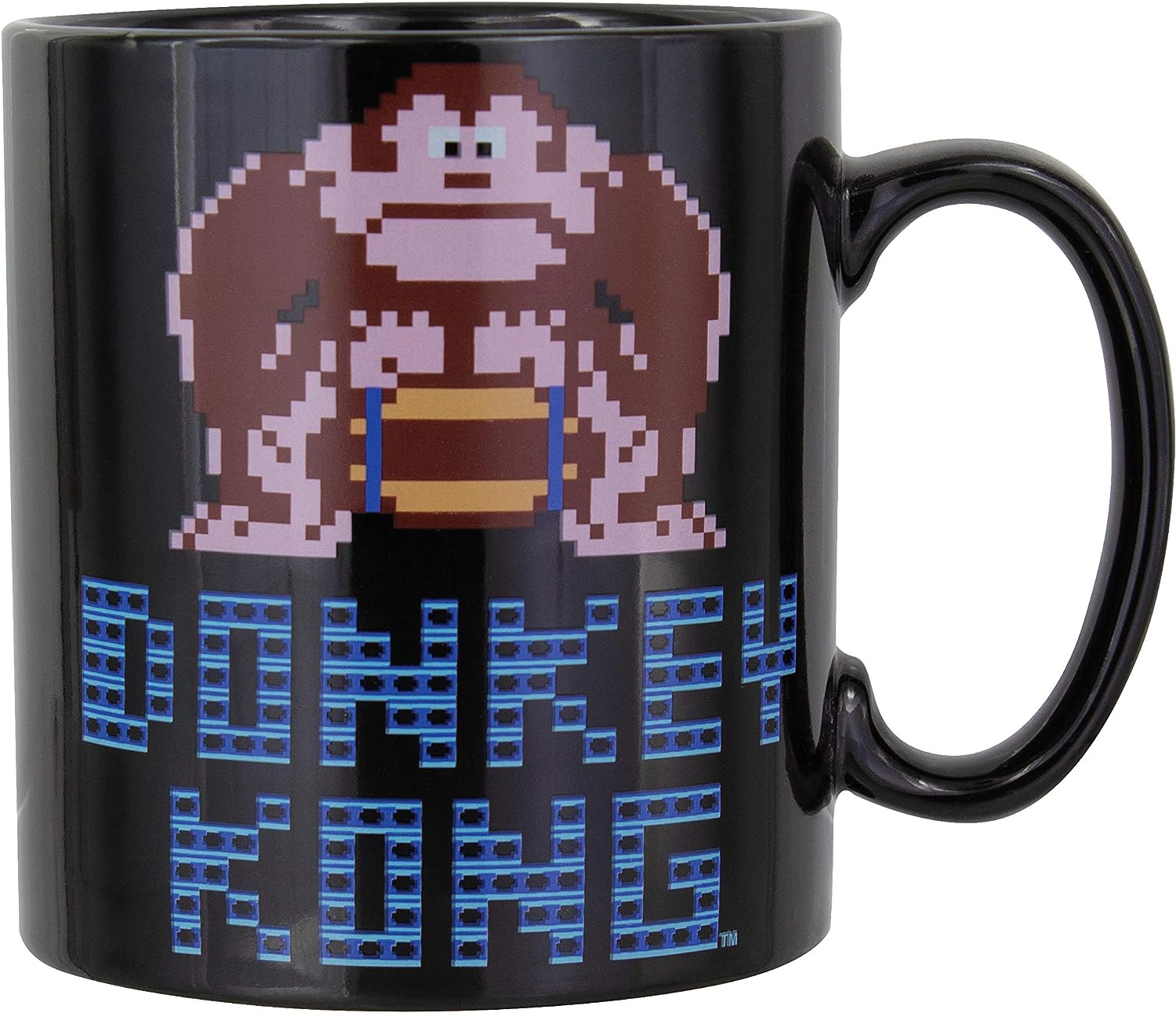 Do you remember a time when 8-bit video games ruled the land? Before GTA and Red Dead Redemption, there was a simpler time, and quarters were king at the local corner arcade. This was a time when Kong ruled the video game landscape…Donkey Kong, that is! Of course, those days are long gone but the memories live on. Today you have kids, a job and a mortgage. More than likely gave up Jolt Cola for a cup of hot coffee in the morning as well. If that’s the case, bring this over sized Donkey Kong to work with you and show off your retro gaming skills. If you were able to rescue Princess Peach in the 80’s, you can beat that midday meeting with Donkey Kong at your side! 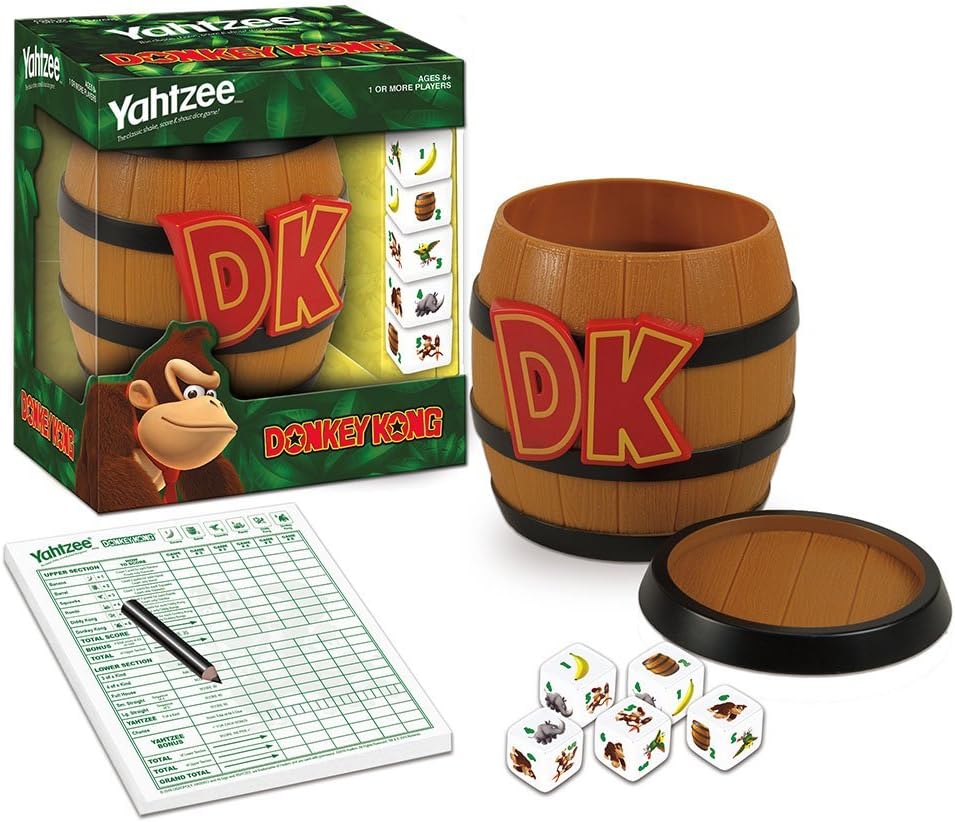 This Yahtzee Donkey Kong game is video game licensed merchandising done right! The dice shaker has been crafted into a perfectly replicated DK barrel as prominently used in the Donkey Kong Country series. The dice themselves are also decked out with numerous characters from the franchise. Even the score cards are customized with DK branding! The packaging itself is also so well done that mint-in-box video game enthusiasts can enjoy the set without even playing it! It’s hard to coerce video game fans into playing traditional games sometimes, but with this perfect marriage of the two you will be all set. 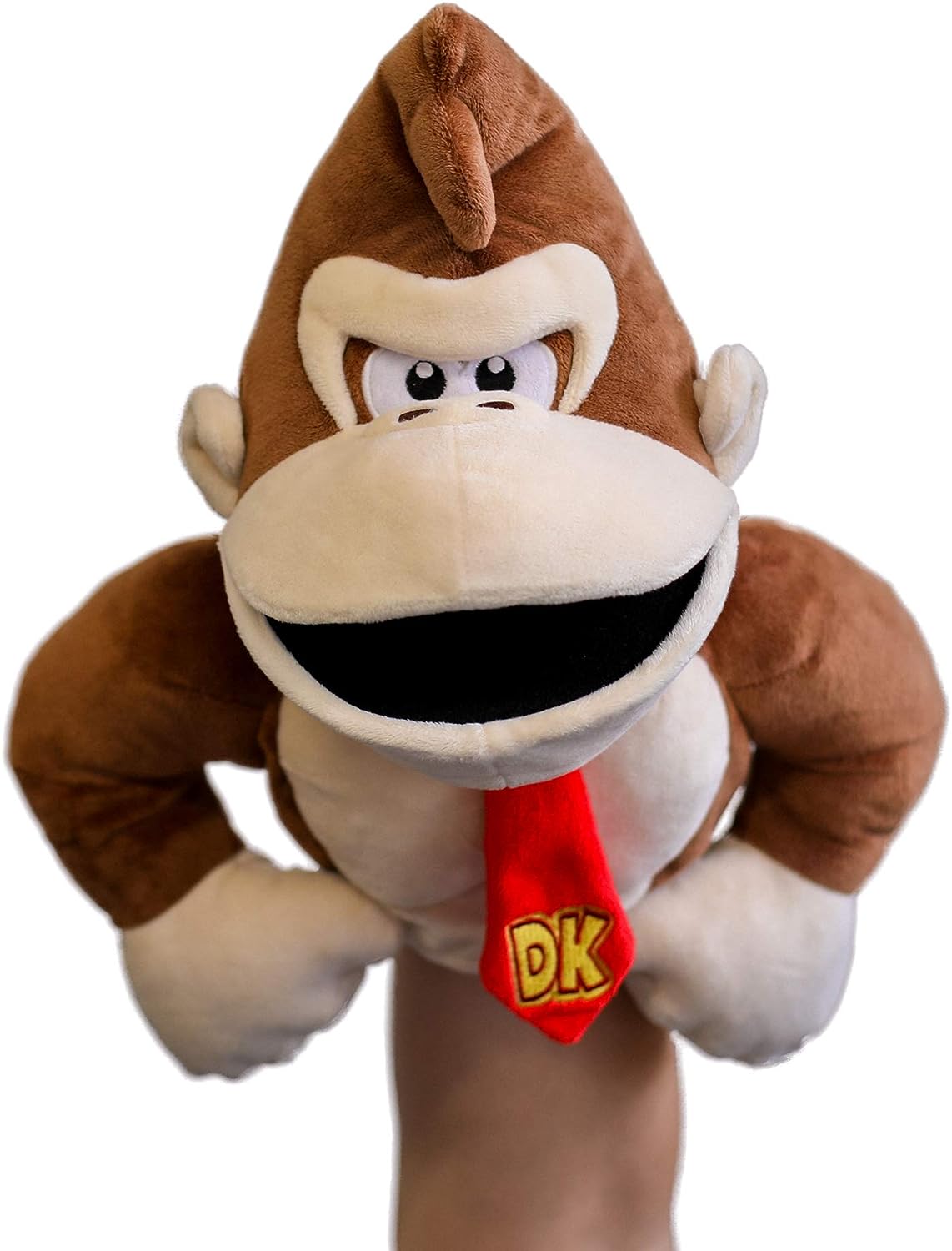 This Donkey Kong puppet from Hashtag Collectibles has a lot of personality all its own, and it really comes to life once operated by hand. Though only featuring the memorable Nintendo icon from the waist up, the size is impressive and the design from all of the most recent DK video game appearances has been accurately translated. He’s incredibly cute, which also removes the sometimes inherent creepiness of more traditional puppets from the equation! Any lifelong fan of Nintendo will surely love this guy, but it will make an especially amazing gift for younger kids that have only just begun to explore the wide world of video games themselves. 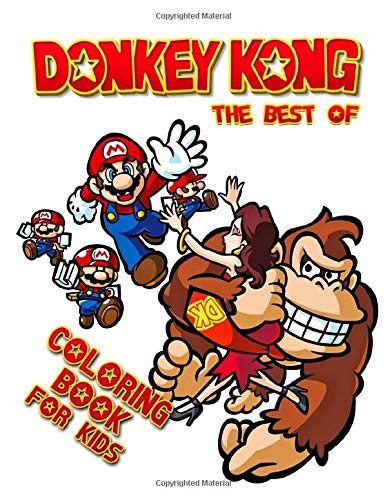 If you have your favorite box of crayons, it can be on like Donkey Kong. Yes, we do mean that in a literal sense. Your favorite 8-bit pixel gorilla is back from the 80’s in coloring book form! Work your way through 45 pages of your favorites including Mario, Princess Peach and the big guy himself, Donkey Kong. Each big graphic is printed on its own high quality page to prevent bleed thru of crayons and markers. Go ahead and embrace your childhood with a pack of crayons, Donkey Kong and a pair of fuzzy pajamas this Saturday morning, it is just what Dr. Mario ordered!

This officially licensed It’s On Like Donkey Kong novelty t-shirt for men is made from 100% high-quality cotton. It features a stylish NES classic graphic design from the retro 2D game and is available in adult sizes small and medium. The soft charcoal grey short-sleeved crewneck shirt is machine washable and would make a great gift for all fans of the original Donkey Kong arcade game from Nintendo. The shirt is manufactured in China and the sleeve hems are double-layered for more durability. Black text on the shirt reads “It’s On Like Donkey Kong” and surrounds a graphic of the main character from the game. 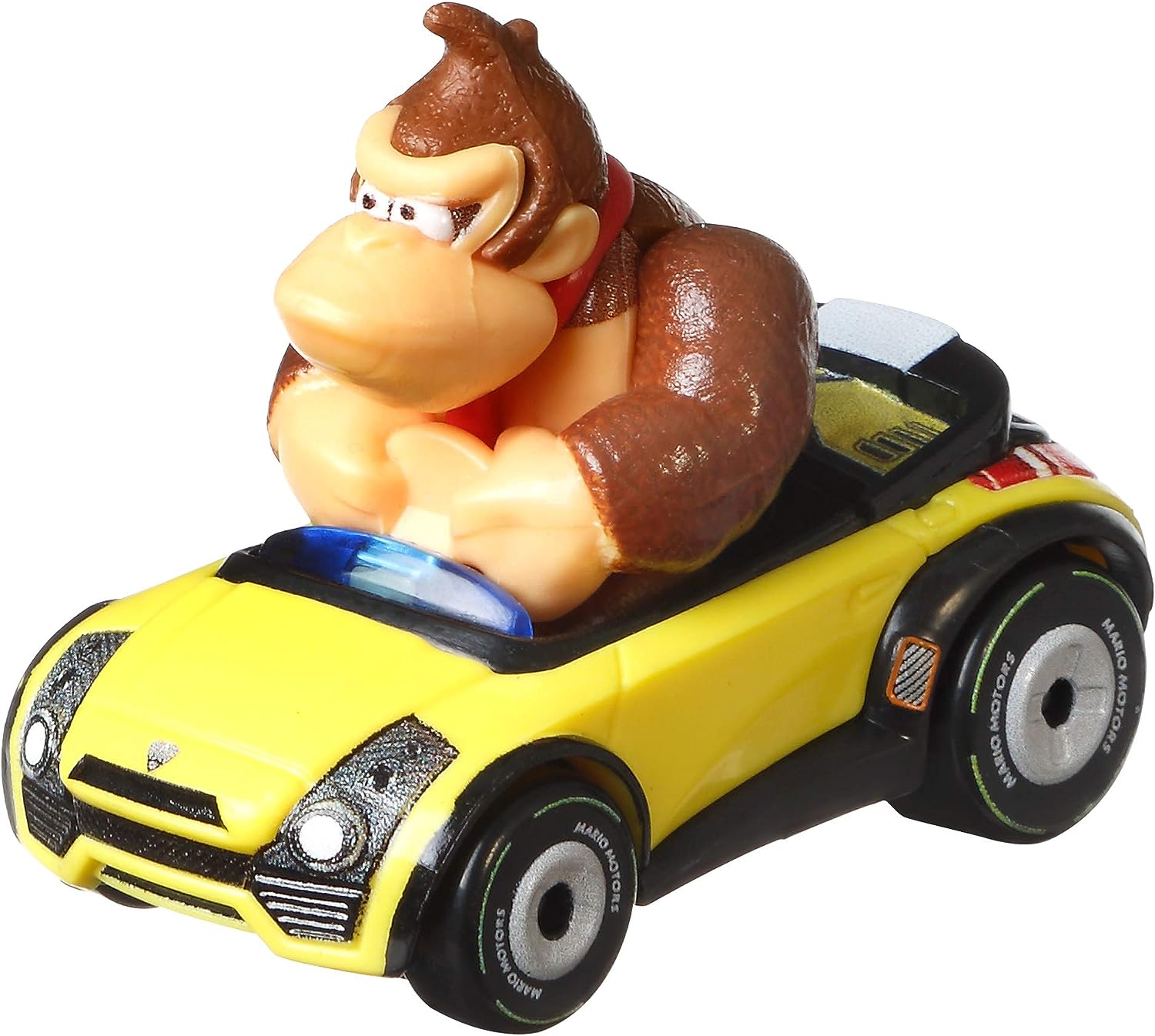 One of the latest licenses features by the Hot Wheels brand of collectible toy cars is none other than Mario Kart, and this Donkey Kong is undoubtedly one of the stars of the show. With bright colors and impressively accurate sculpting despite the small size, this is a well made piece that shows off precisely why Hot Wheels became such a powerful brand in the first place. The marriage of these two properties is a no brainer, and you’re likely to end up wanting the entire set once you have DK. In fact, this guy looks so good that you might end up cracking open the package as soon as it comes in! 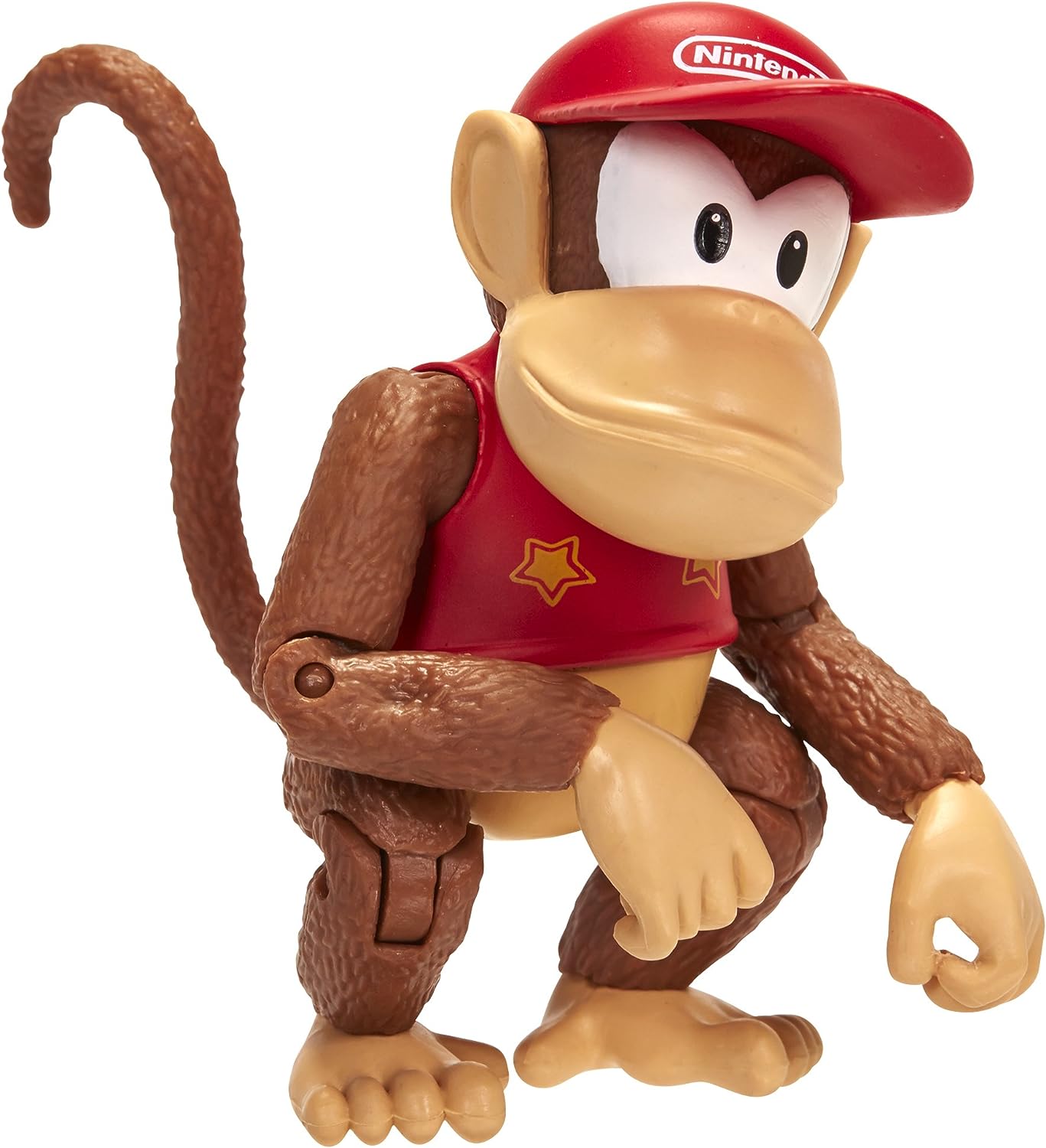 Ever since his first appearance in 1994’s Donkey Kong Country for the SNES, Diddy Kong was a warmly welcomed new addition to the Nintendo family. Now, he can melt your heart all over again with this 4 inch World of Nintendo action figure. Manufactured by Jakks Pacific and licensed directly from Nintendo themselves, this is a well sculpted and reasonably articulated toy that can pull off several fun poses that will have you humming your favorite old DKC tunes in no time. This is an entry in a much larger line of Nintendo-centric figures, and a great way to begin your collection. Once you have Diddy, you’re sure to start clamoring for more! 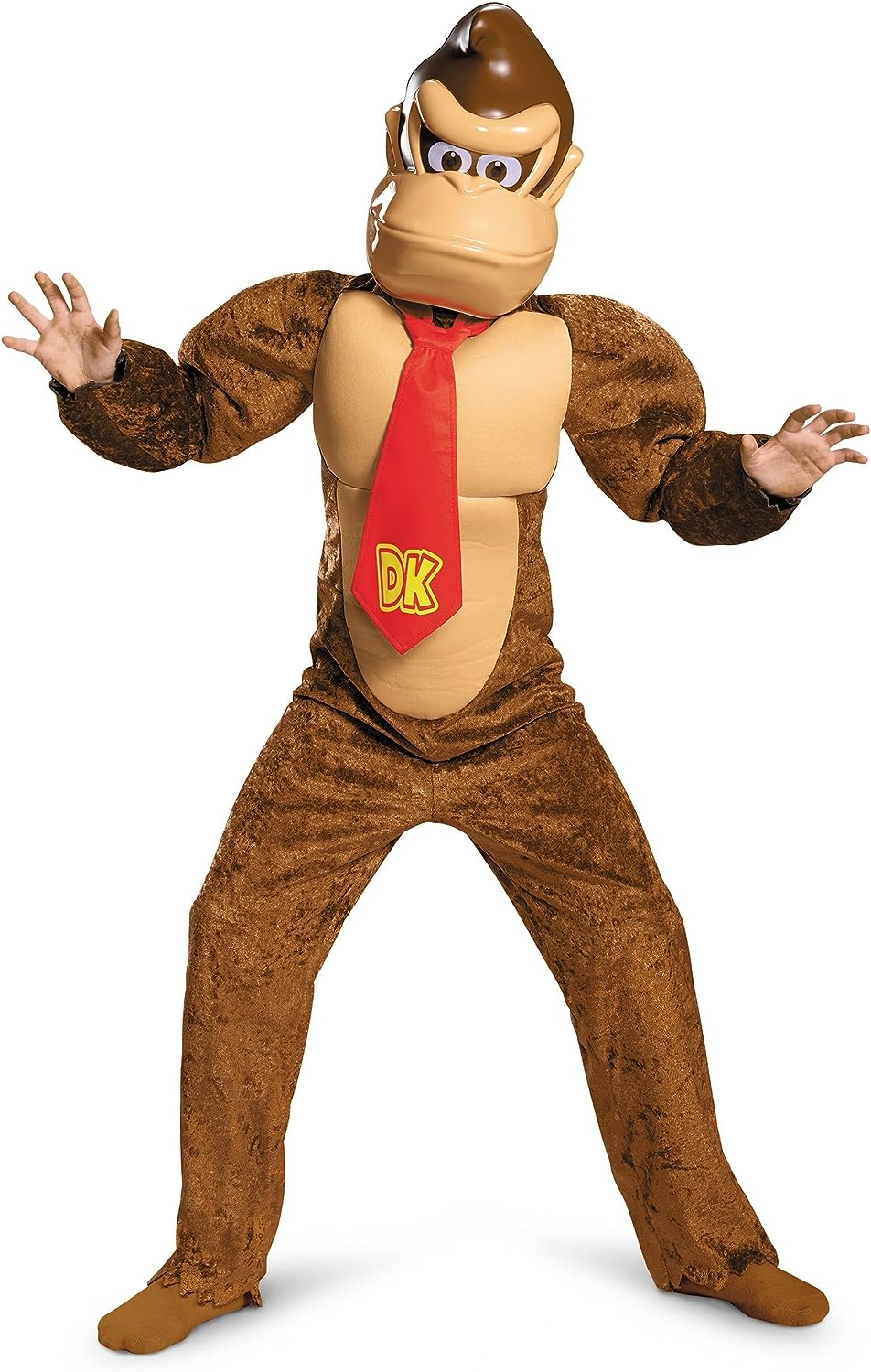 If you have a child, niece, or nephew in the range of 8 to 12 years old that’s absolutely crazy for Donkey Kong, this DK costume will be right up their alley. It can be worn as a Halloween costume of course, but there’s nothing stopping anyone from throwing it on whenever the mood may strike; the main suit can even be used as pajamas during a video game themed sleepover! From the long red tie down to the now trademark sly grin, all of the core details have been captured. Most customers have remarked that the quality is reliable as well. Any of the younger DK fans in your life will have a barrel of a time with this one! 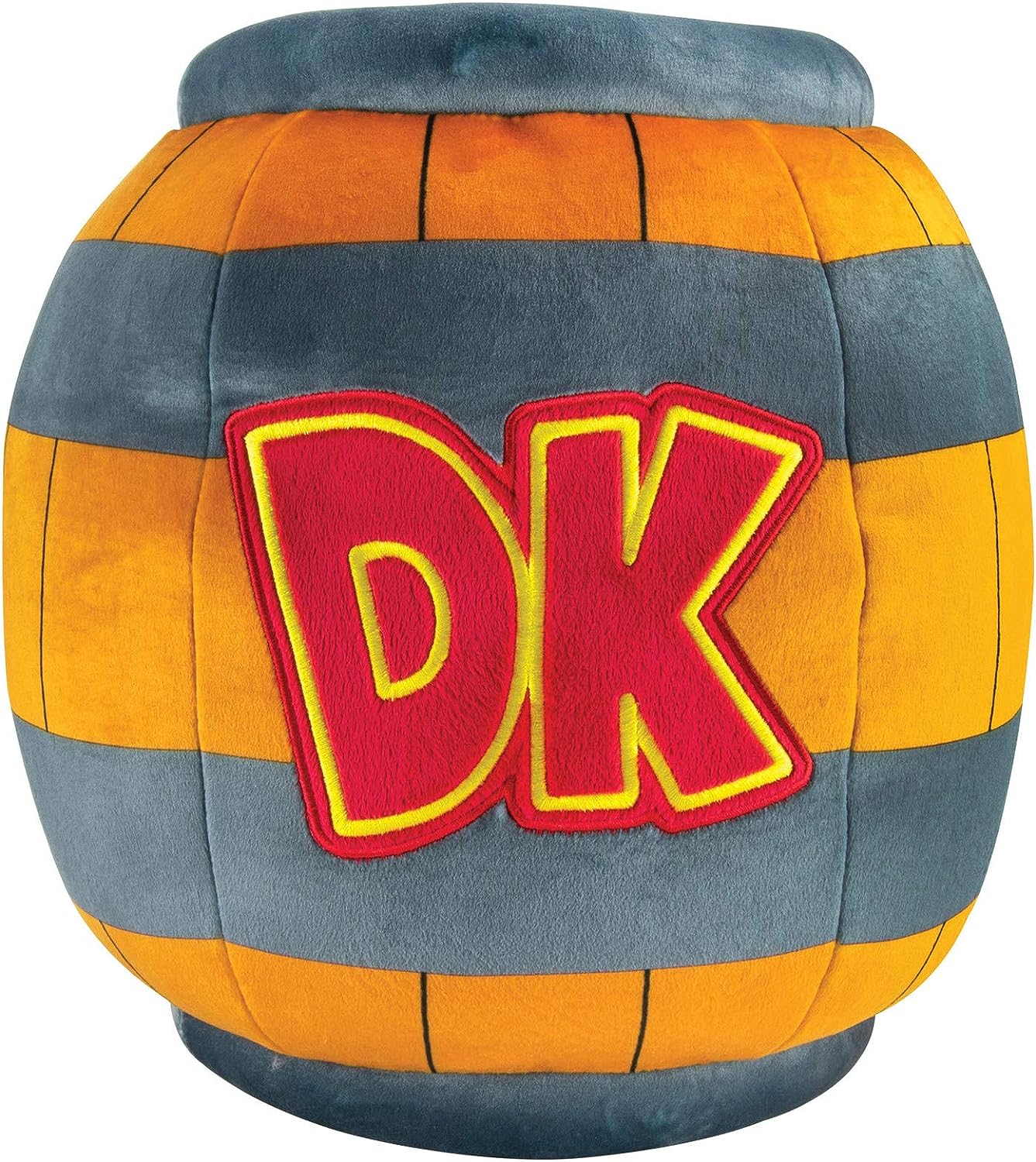 If you’ve played Donkey Kong Country, DK Tropical Freeze, DK 64, or even the original arcade title, you know all too well that the barrel is one of the most long lasting pieces of iconography from the franchise. This Donkey Kong barrel mega plush toy is a wonderful way to pay tribute within your personal video game collection. It has a beautiful design that perfectly recreates the barrels from the games, and the soft cushioned material makes for a wonderful pillow. Throw one or two of these on the couch in front of your game console and you’ll be well on your way to cultivating an amazing gaming room!