Can you already believe that the first God Of War game already dates back from 2005? That is when it came out on PlayStation 2. If you are not familiar with God Of War. It is one of Sony PlayStation’s exclusive games that has won a ton of awards and with good reason. Because the games are wonderful. They are beautifully designed and always have a very compelling story. As I’m a big fan, I went on a quest to challenge the Gods and tried to find the best God Of War Gifts myself.

In the God Of War games, the story revolves around the character Kratos who is a Spartan warrior. During the first game, Kratos is on a path of chaos and destruction to revenge his family as he was tricked by Ares in killing them. In the last game, he challenges the Norse Gods together with his son Atreus.

The Best God Of War Gifts 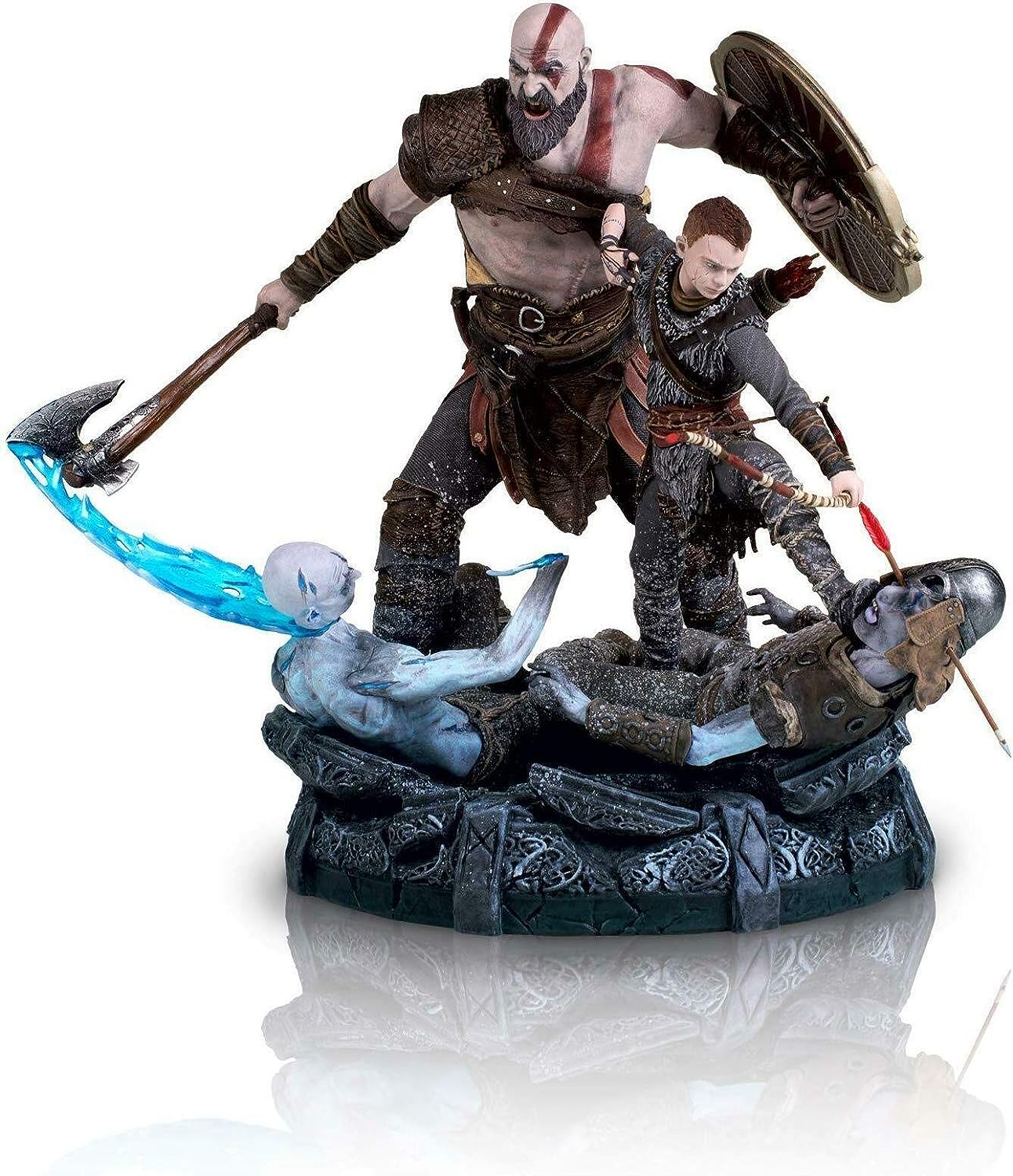 This collector’s edition of the God of War 9″ Kratos and Atreus is a must-have collectible for all fans of this game. The statue feels fairly solid and the details are nothing short of amazing. The colors complement the shapes in a striking manner. The faces of the characters show their emotions in a very realistic manner. This dramatic battle scene is one of the best on the market, as stated by many people who bought it either as a gift or to enrich their God of War collection. Apparently, the statue is a 1:10 or 1:12 scale, which makes it a bit smaller than the regular 1:6 scale statues. 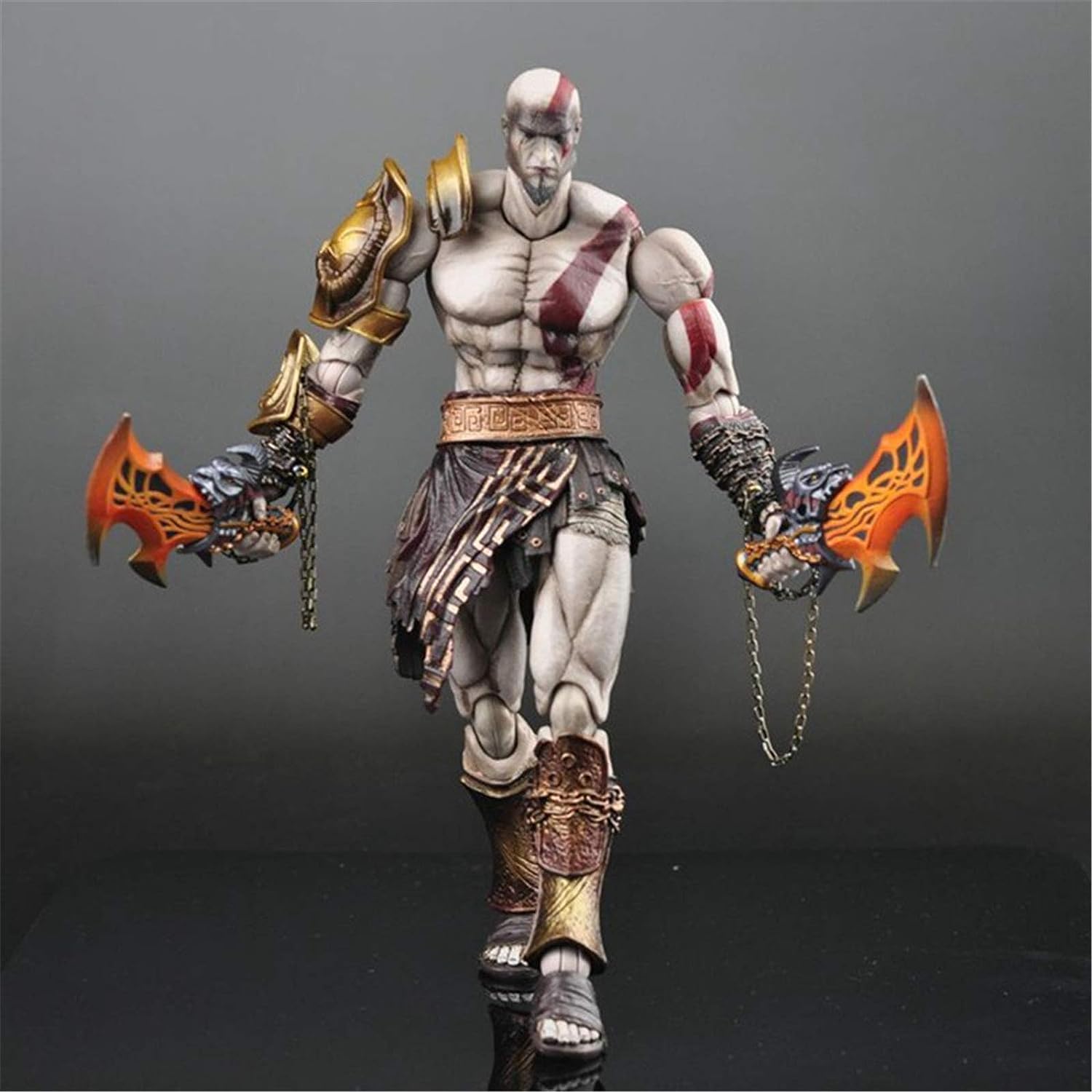 If you missed out on one of the earlier releases of NECA’s original Kratos God of War action figure, this listing will give you a second chance without the need to shell out a premium! Once highly sought after toys of this caliber hit the secondary market, their price tags can really soar. Fortunately, you haven’t missed your shot to proudly display this Spartan warrior on your shelf. Best of all, this release will give you the best of both worlds when it comes to the “mint in package” or “opened” debate; the front flap of the packaging will allow you to enjoy the figure and its immaculate sculpt without ever having to remove it!

If a character of any kind exists, you can bet it has been captured in Funko Pop form! Surprising no one, Funko has added the God of War video game series to its ever expanding collection of licenses. Honoring this partnership is none other than an incredibly cute two-pack featuring Kratos and Atreus from the massively popular PS4 game. Decked out in wide window packaging, this set will make for a beautiful display piece for your collection. It will be right at home in the midst of your other Funko Pops, or even offer some nice visual flair to your Playstation shelf. Funko completionists will have to have this set of course, and it would make a great gift for any fan of the game as well. So is Kratos the God of War, or the God of Cuddles? With this oddly cute plush toy, we’re really starting to wonder. Sure, the trademark angry grimace is there, but this super deformed, chibi style design is far more adorable than it is intimidating. All the same, this toy offers a unique spin on the iconic character that will make for a wonderful new addition to any video game memorabilia collection. The design is based upon Kratos’ look from the 2018 Playstation 4 God of War reboot, making it a must have for fans of that game in particular.

God of War: The Card Game 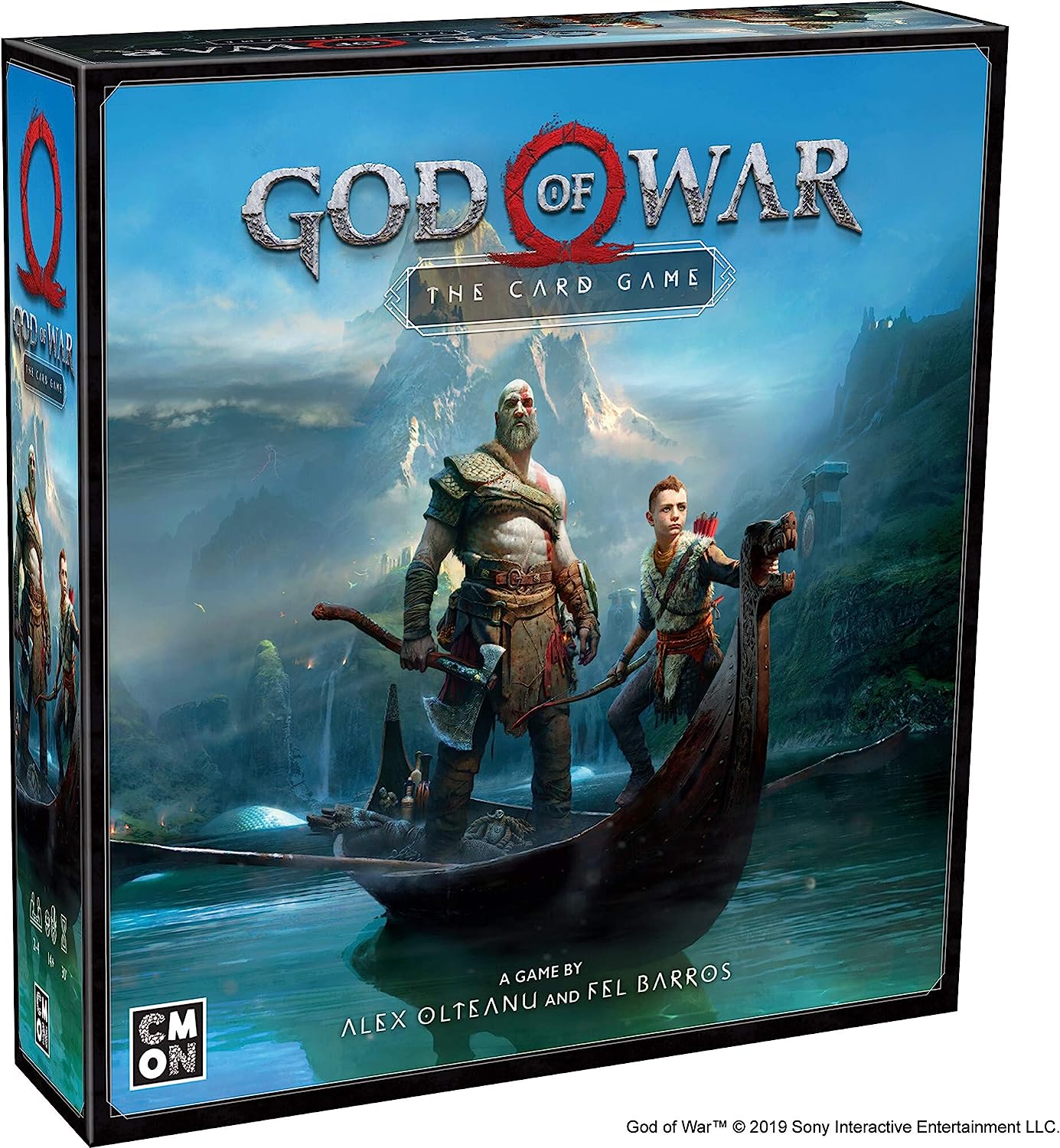 The end is coming. Ragnarock, the cataclysm that will end the world is closer than ever before, only Kratos, the God of War and his compatriots can stop it. This thrilling card game is based on the best selling Playstation franchise. Players must brave the Well of Souls and win through a variety of quests, defeating a myriad of monsters to unveil a combination of results and heroes who can save the world as we know it. Choose to play as Kratos, Mimir, Atreus or Freya and work together with your teammates in their mystic incarnations to confront the challenges of a variety of scenarios and win what might be the final battle. the card game is suitable for ages 14 and up and between one and four players can take part. 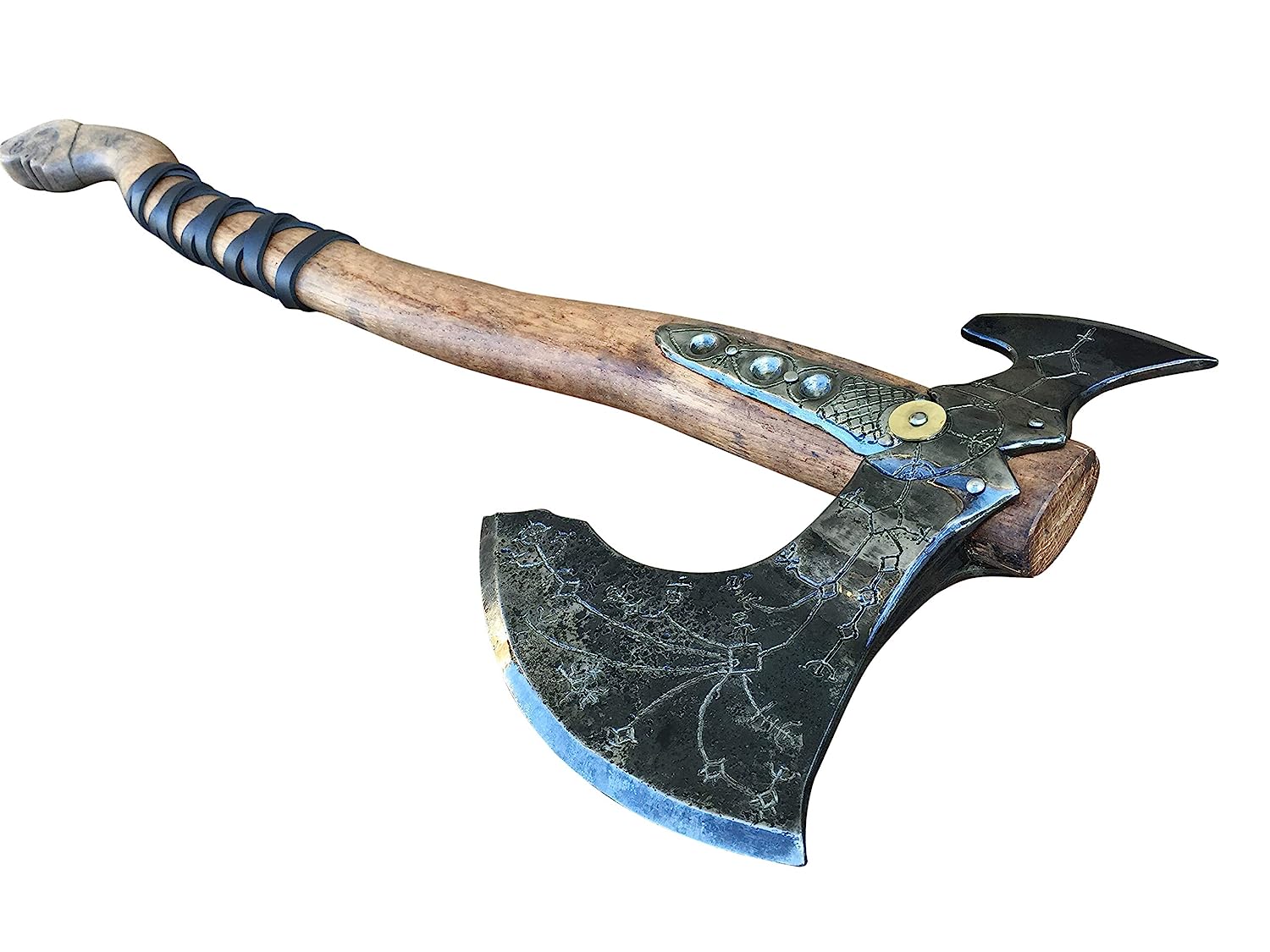 One of those most memorable pieces of imagery from the Playstation 4 God Of War game is undeniably Kratos’ Leviathan Axe. In a bold move, the developers chose to replace his trademark chained weapons with this Norse mythology style hand axe that acts much like a boomerang. If you’re a fan of the game, you’re surely a fan of this weapon as well. Now, you can own a handcrafted replica that is every bit as beautiful as the model Kratos uses to great effect in the PS4 game. The price tag is a little on the hefty side, but if you’re a GoW fan and you can swing the money, this will be a highlight of your collection to be sure. 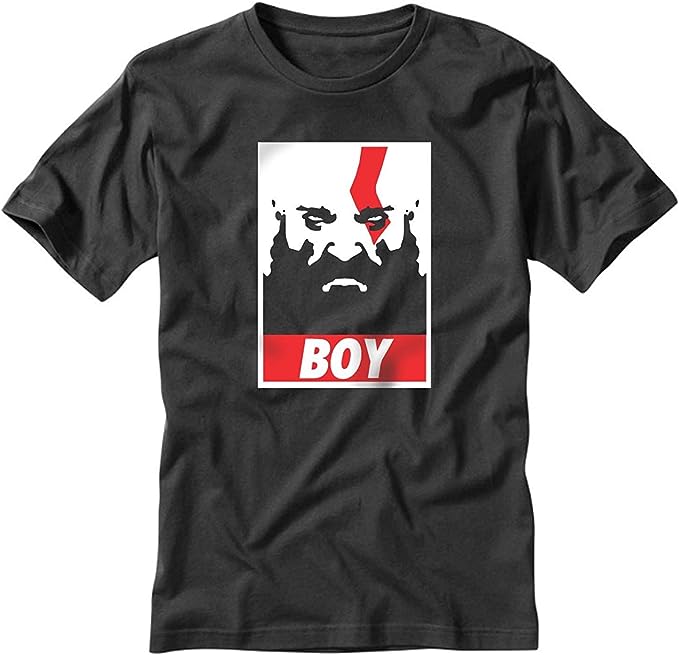 Made from 100% preshrunk ringspun cotton, this God of War t-shirt is the perfect garment for an Obey fan. Many people buy this t-shirt because of the Obey version of Kratos from God of War. The double-needle stitched sleeves and the taped neck and shoulders offer this t-shirt an excellent durability and a good resistance to wear and tear. The fabric is soft and pleasant to wear. The fit at chest and the fit at waist are just right, while the shirt length is below belt. This God of War shirt for men is available in six sizes ranging from S to 3X-Large.

God of War: Lore and Legends 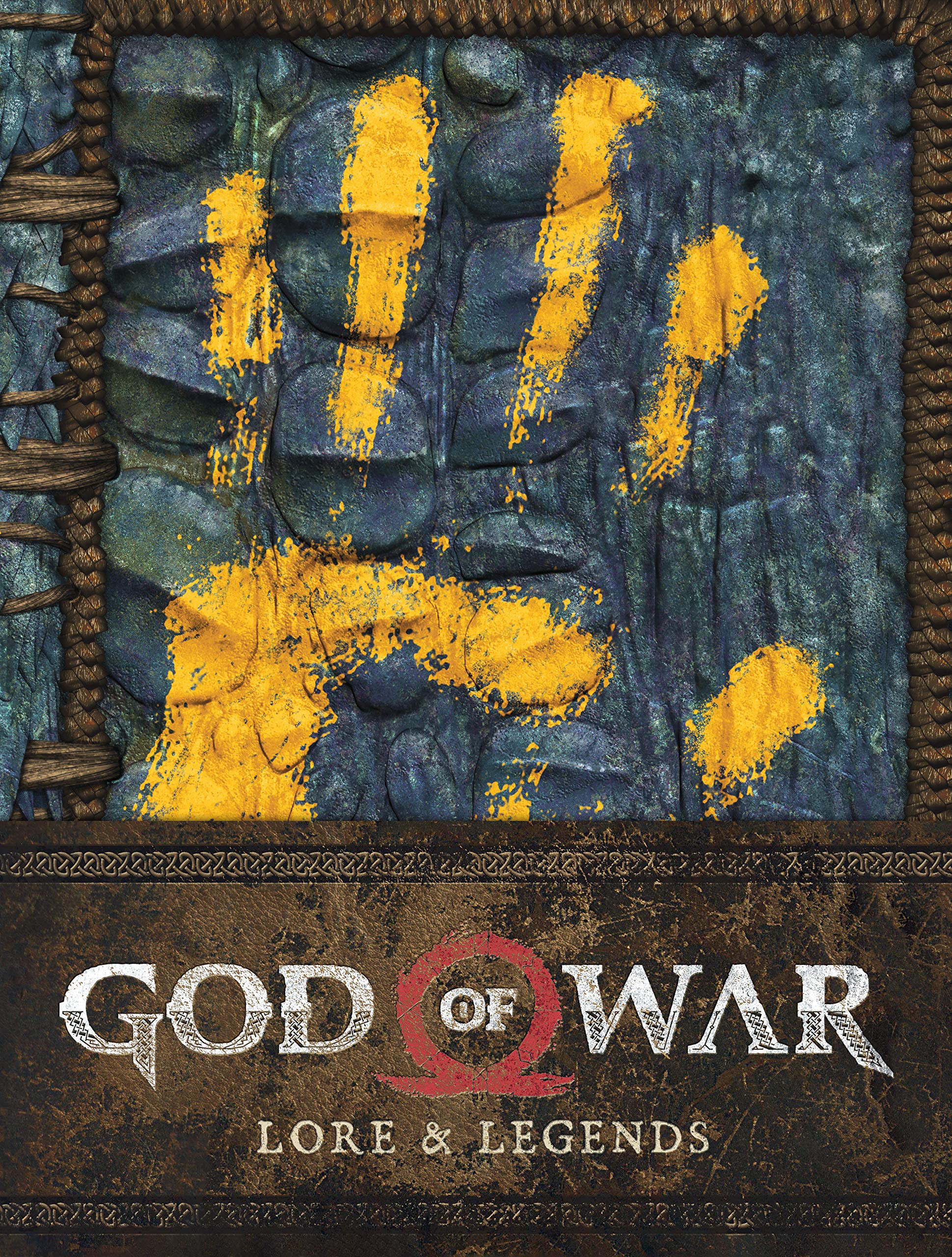 You can not call yourself a fan of God of War if you do not have God of War: Lore and Legends in your collection. This epic hardcover book takes you on an incredible journey through the Nine Realms with Atreus and Kratos. Chronicling their heroic escapades throughout Jötunheim and Wildwoods of Midgard! For the first time in the history of God of War, you will learn the intimate details of the characters that you have lived and fought with in this incredibly detailed environment. Gain the knowledge that will provide a deeper level of depth to this monumental universe. 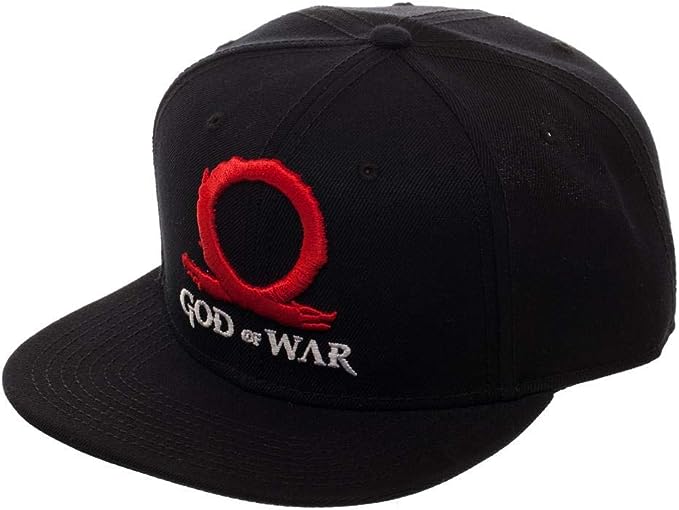 This God Of War Hat features the The God of War 2nd era logo. It is stitched on by needlepoint which makes this truely unique. It is officially licensed by Playstation and so 100% authentic. The hat is made from 100% cotton so it is best that you hand wash it with cold water. 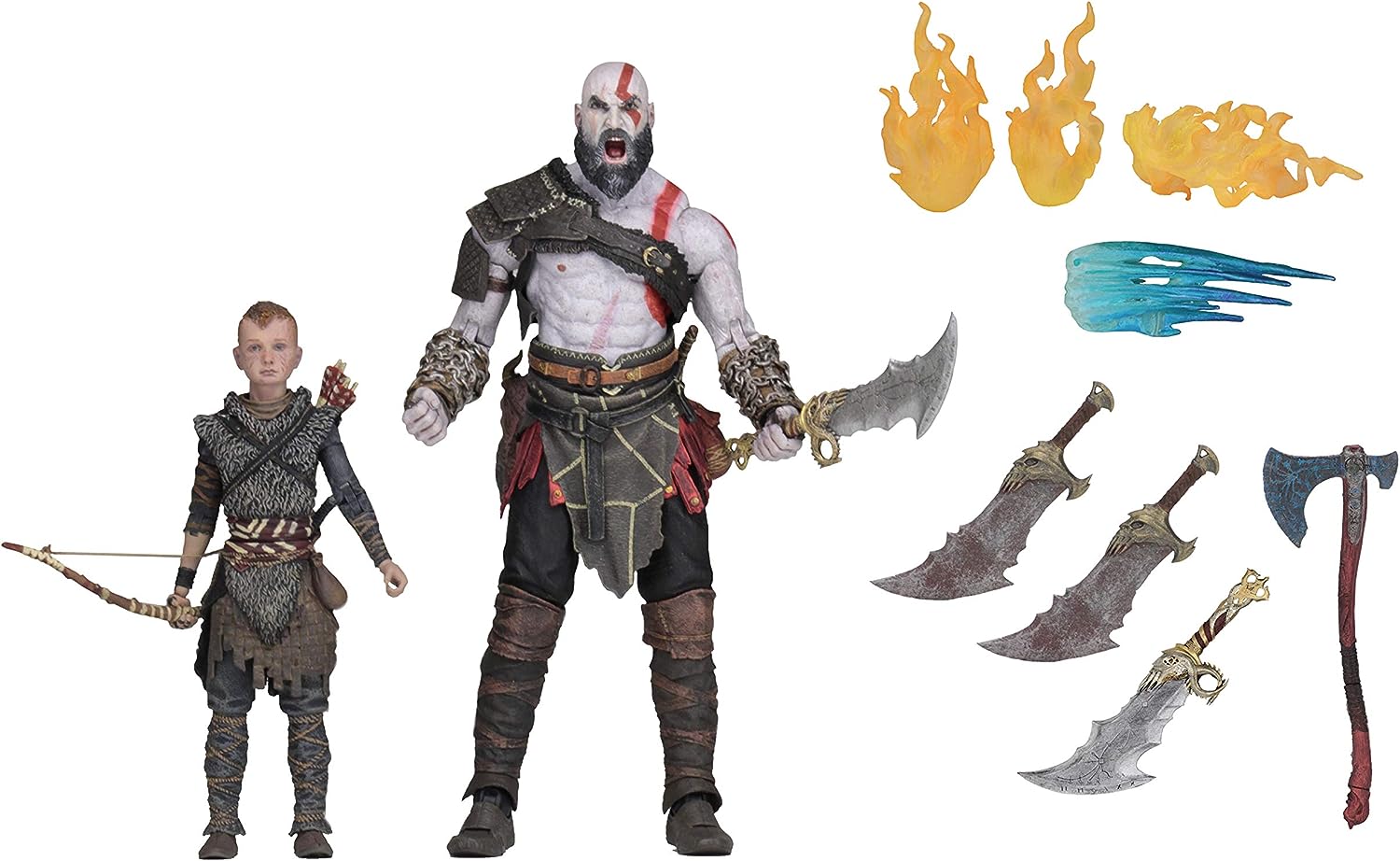 2018’s God of War for PS4 was a groundbreaking reinvention of the popular Sony franchise that took fans and critics by storm. At the heart of the game’s allure was the blossoming relationship between father and son duo Kratos and Atreus. In this incredible collector set from NECA, the pair have been perfectly captured in action figure form. With gorgeous gate-fold packaging, you may be tempted to showcase this set as-is. NECA’s craft has only gotten stronger over the years however, so there’s plenty of fun to be had should you choose to open and pose the figures for a more personalized display. The sculpting is immaculate and there are a plethora of accessories to immerse yourself with. 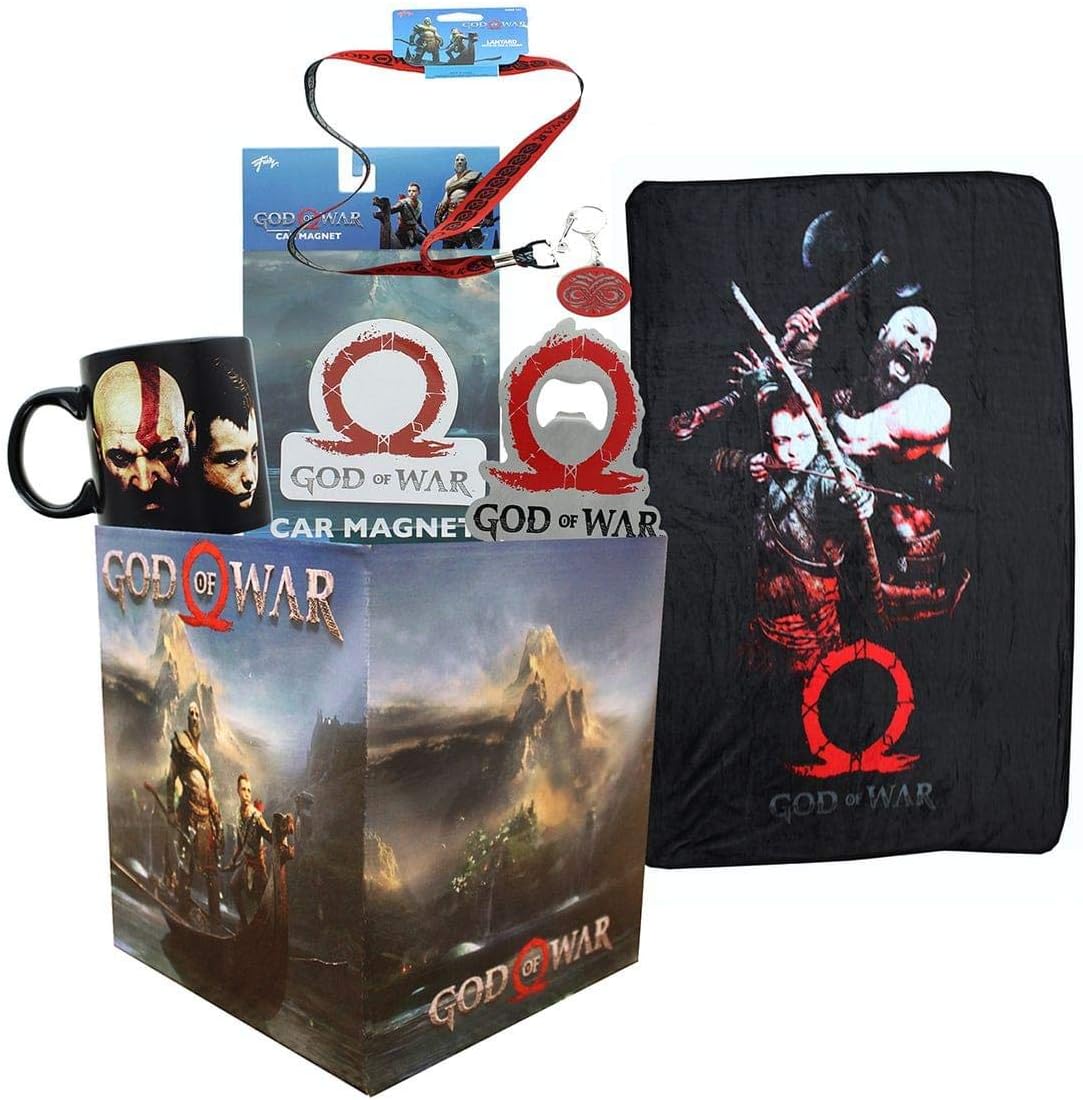 If you are a God of War super fan (or you have one in your life that’s in need of a gift), this God of War Collector’s Box from Toynk is an offbeat way to build up a collection with one simple purchase. All in this one set you will find a large 45 by 60 inch blanket featuring Atreus and Kratos, a standard sized coffee mug, a bottle opener, and a lanyard. If you ever thought you’d already purchased all of the God of War swag ever released, there are surely a few new items here that you’ve likely never come across before! 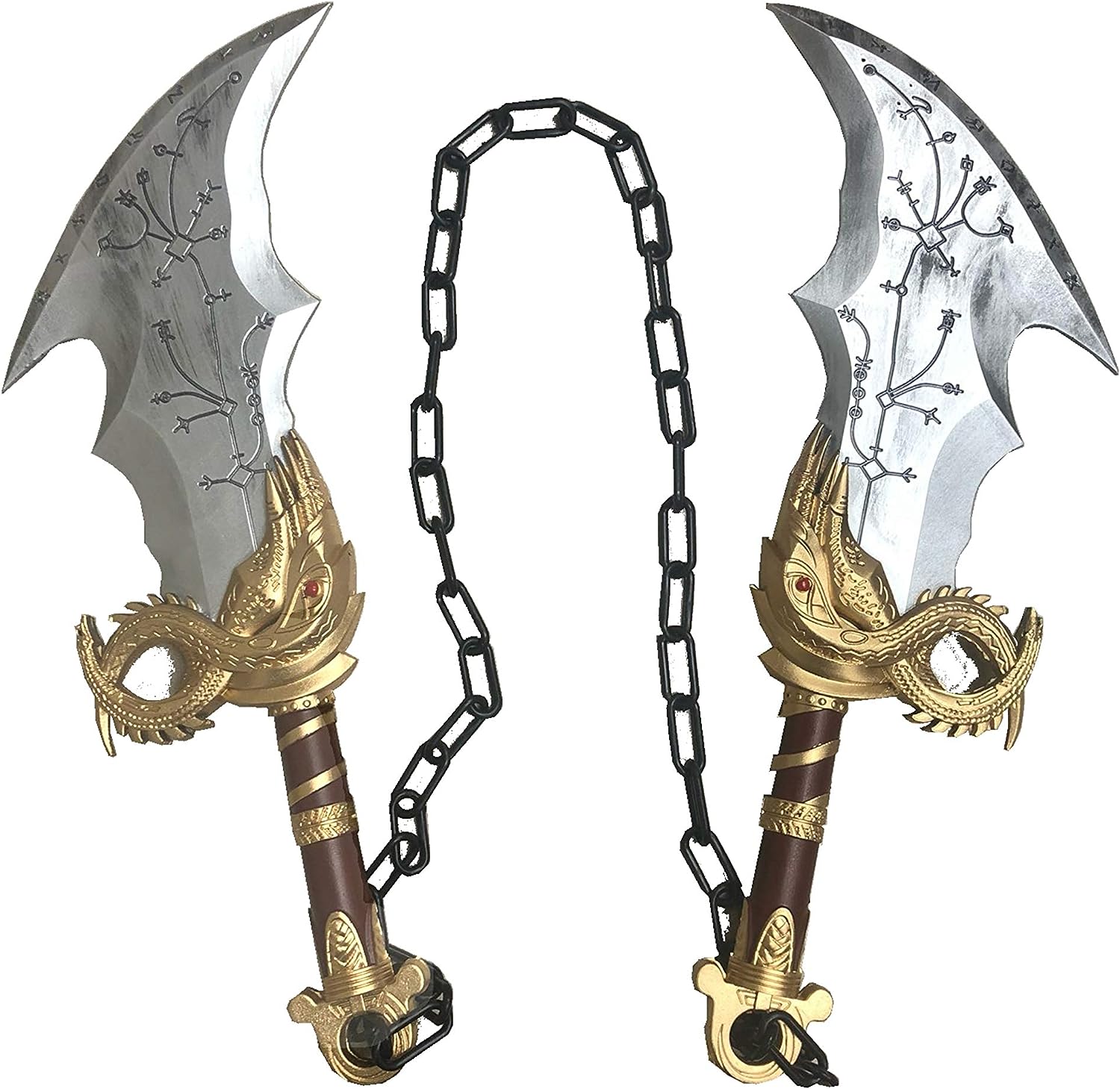 Are you a huge fan of the God of War? If you are, you would want these awesome Blades of Chaos in your collection. This prop is made of high-density form and features two blades of 17 inches length each. These blades are connected with a plastic chain. Even though these are made from high-density foam, these feel solid in your hands. You can detach the chain if you want. It doesn’t feel like a toy and you will be more than satisfied with this purchase. The best thing about these blades is the details etched on them. These are sturdy, well balanced and durable, you will love taking these with you to cosplay events.

God Of War: The Novel 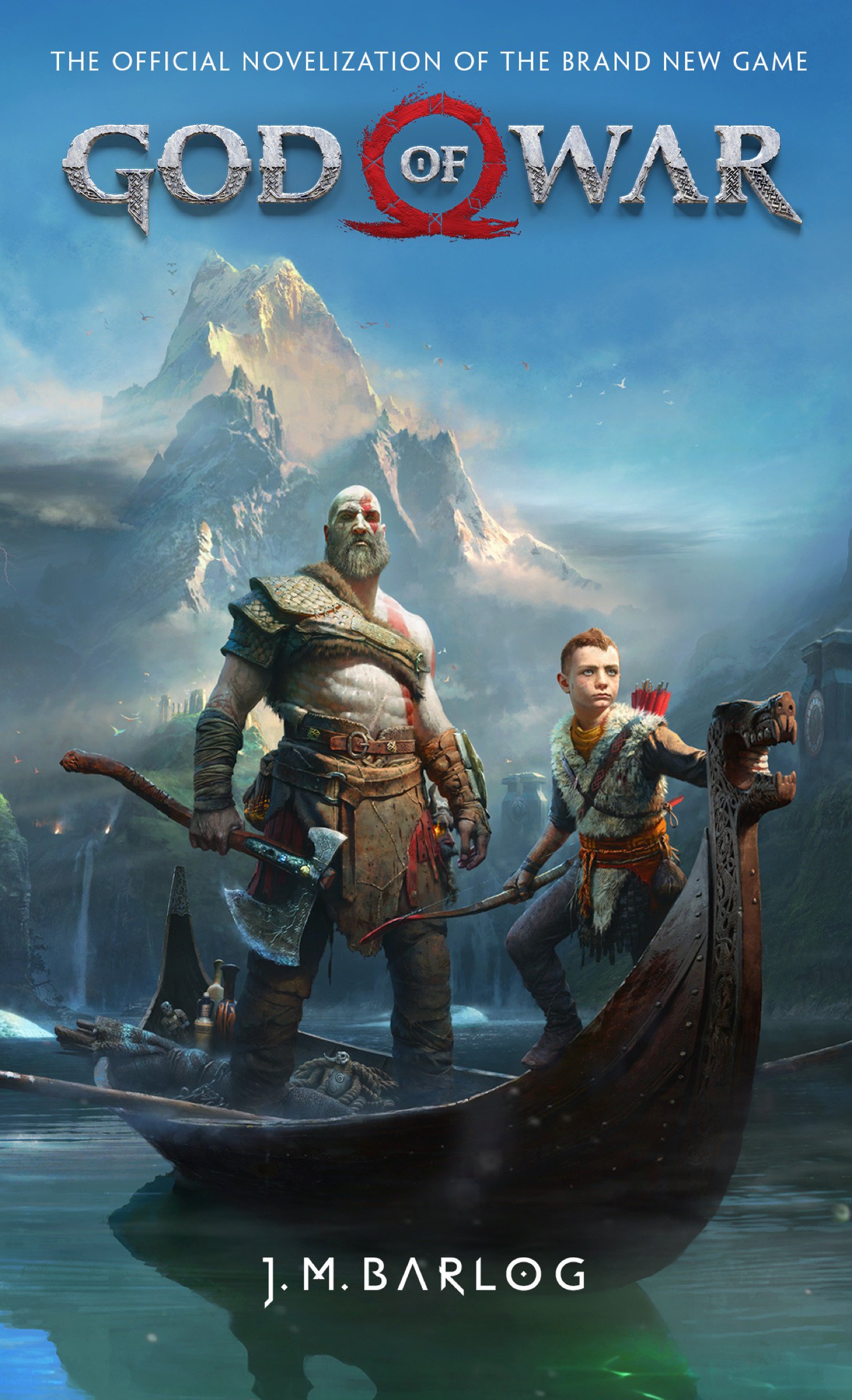 God of War is an upcoming action-adventure video game, and Titan Books has published the God of War – The Official Novelization by J.M. Barlog. This is the story of Kratos, who gained vengeance against the Gods of Olympus. Today, he lives as a man with the Norse gods and monsters, and he not only must fight to survive, but he has to teach his son to do the same. Chicagoan J. M. Barlog, who currently lives in Southern California and served in the U.S. Air Force in Vietnam, has written many novels in the action-adventure genre. God of War – The Official Novelization is perfect for those who want to learn more about the characters and the game as a whole. 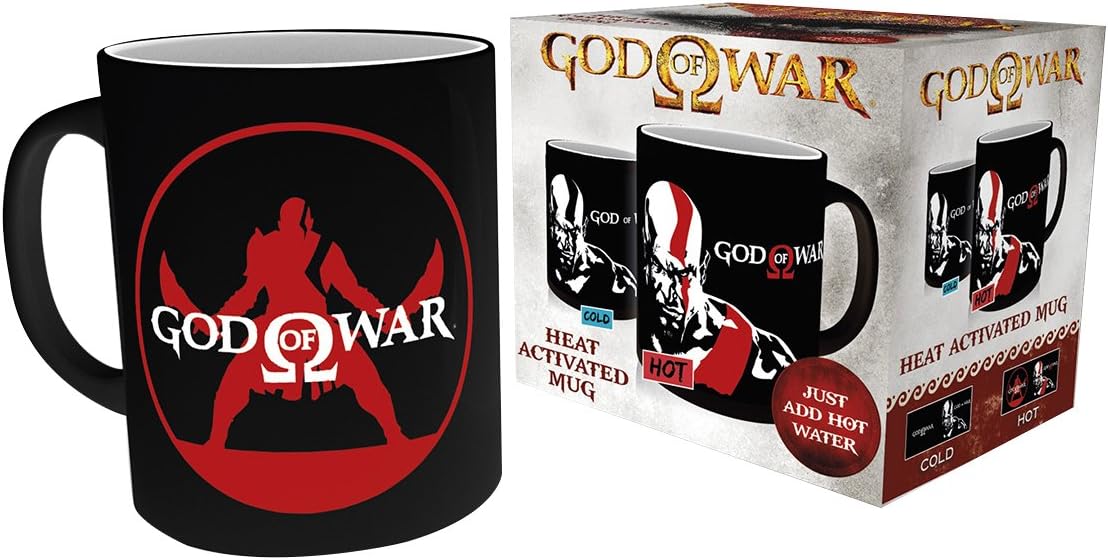 Collectible mugs are fun and all, but only in rare cases does a company manage to pull off something this clever. By default, this heat changing God of War mug features classic Kratos artwork that any fan should be well familiar with. It’s a stylized print honoring the original design from the Playstation 2 days, which would be worth the price of admission all its own. After all, there’s no insane cost here; you pay about as much as you would for any licensed mug these days. There’s a bit more to this beauty than meets the eye however; when you fill it with a hot beverage, the iconic red tattoo honoring Kratos’ brother Deimos appears in stark contrast with the existing white and black design. This is an amazing idea that is brilliantly pulled off. If you’re a God of War enthusiast, this should absolutely be your mug of choice.

Whether you’re a cosplayer, online skit producer, or maybe even just looking for your next Halloween getup, the God of War Kratos costume from VOSTE is a choice that’s well worth considering. Though manufactured with relatively high quality materials and excellent craftsmanship, you’ll find that the pricing is quite fair. The details are all captured with a fair degree of accuracy as well. Provided you can nail the body paint, there won’t be any mistaking who you’re supposed to be! If you aren’t the type to enjoy making your own costumes, this will more than get the job done if you’ve been interested in donning the iconic ghost of Sparta gear.