The Green Arrow has become very popular in the last couple years thanks to the TV series Arrow. In this TV show, Stephen Amell stars as Oliver Queen which he does brilliantly in my opinion. They dragged it on a little bit too long but that is a topic for another time. The Green Arrow already made his first appearance in 1941 and he is also part of the Justice league like Batman, Superman and Aquaman which is not that well-known to the wider audience. As we want to list all geek gifts, we couldn’t left out this very cool Green Arrow merchandise. 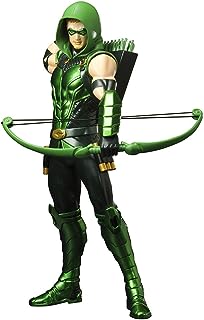 Kotobukiya have proven themselves as one of the leading providers for quality collectibles yet again with this incredible Green Arrow statue. It stands at around 7 inches tall in a heroic pose, and its sculpt captures the comic legend in all his glory. This is not his classic look, but it is a popular design from the slightly more modern “New 52” DC relaunch. The high contrast styling of the comic artwork has been recreated to a T thanks to the glossy finish, and every detail has been lovingly preserved. You can even count individual arrows inside of the quiver! 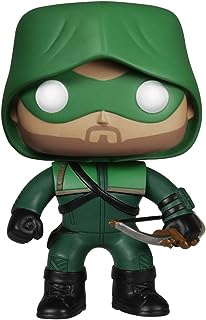 Fans of Green Arrow will love this adorable mini figure complete with hood and bow, standing almost 4 inches tall, this little guy is ready for any area you want to put him in. Number 207 in the POP line, this small collectible is suited for older children and adults. Great detail is given to the paint on each POP figure, ensuring you get a figure you can be proud of and that you want to display. The box contains a window for displaying the POP in box, ensuring that it keeps the collectible value while still being a functional conversation piece. 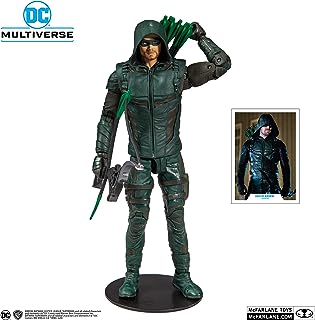 Could you use a few more grown-up toys in your collection? If so, you’ll want to check out this action figure from McFarlane Toys, which is inspired by the popular CW series Arrow. The figure is highly articulated and has 22 moving parts, allowing users to find the perfect action poses. It also comes with Green Arrow’s most essential accessories, such as a quiver full of arrows and a bow. If you’d prefer to leave the toy in its box, the figure comes in stylish windowbox packaging. It even comes with a collectible art card featuring a screenshot from Arrow. 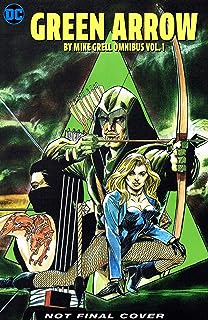 Get to enjoy the stories from the 1986 – 1990 from famous artist Michael John Grell, all collected into one hardcover format: Green Arrow: The Longbow Hunters Saga Omnibus Vol. 1. Published by DC Comics with 1,536 pages of purely Green Arrow fun. Read more as Green Arrow goes on an adventure and taking on Russian spies, busting famous drug cartels, oil companies, the IRA and his infamous antagonist Shado. Unveil this book full of exciting action adventure with Speedy, his origin and life story, and join him as he also finds out he’s about to have a child! All of these jampacked into a large hardcover that will surely bring nostalgia and keep you hooked from the first page up to the last! 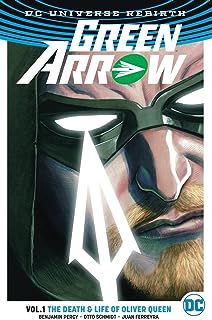 Oliver Queen’s life is in turmoil. He’s fallen madly in love with Black Canary, who is pushing him to challenge his world view. His financial empire is under attack by a mysterious organization. In the midst of all that, he has to balance his life as a superhero with his life as a rich playboy. This gripping story comes from Teen Titans writer Benjamin Percy, with beautiful artwork from Juan Ferreyra and Otto Schmidt. The collection includes Green Arrow: Rebirth #1 and Green Arrow #1-5. This story is ideal for new readers, but long-time fans of the character will also get caught up by the action and adventure. 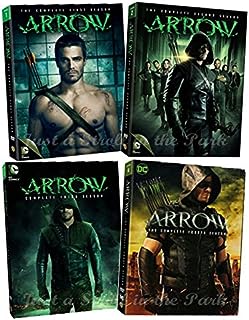 On the CW’s Arrow Oliver Queen returns to his home of Starling City after being presumed dead. Queen spent years stranded on a remote island, and his time on the island has changed him. Now that he’s home, Queen is masquerading as a wealthy playboy by day and fighting crime at night. Now, you can relive these adventures with this DVD collection. This bundle includes the first 4 seasons of Arrow, which should keep you entertained for quite a while. If you don’t want to have to rely on streaming services when you want to watch Arrow, this bundle is a great option. 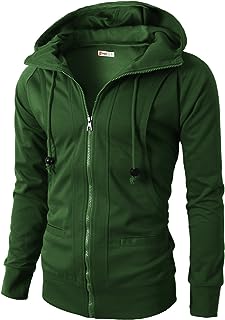 Have you been searching for a casual, comfortable hoodie that you can also use for a Green Arrow costume? This comfortable zip-up hoodie is the perfect solution. The hoodie is available in the perfect shade of emerald green, and the tighter fit will make your costume easier to recognize. Details like the elastic hem and cuffs and adjustable drawstring make it easier to get the perfect fit. The material is sturdy, but is isn’t overly thick, which means that you can layer it or wear it on its own. You don’t necessarily need to buy a pre-made costume in order to get the right look. With this hoodie, it’s easy to make a costume of your own. 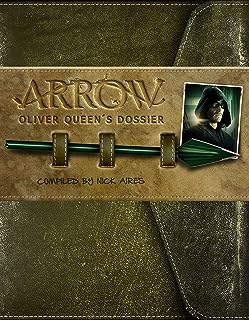 Have you ever wanted to learn more about Star City, its villains, and the man that protects it: Oliver Queen? This detailed dossier will tell you everything that you want to know. It’s packed with confidential documents collected by Felicity Smoak and Oliver Queen. It includes the Queen family’s records, weapon schematics, criminal intelligence, and so much more. The hardcover dossier is beautifully designed and is made to look like a real collection of documents. If you want to leave the real world behind and immerse yourself in the world of Arrow, this dossier will allow you to do exactly that. 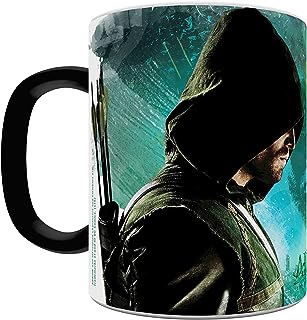 Fans of the CW’s Green Arrow series will fall in love with this beautifully designed mug. The mug, which features an image of Oliver Queen in his Green Arrow gear, uses heat activation to display an inspiring hidden image every time you fill your mug with a hot beverage. When the liquid is emptied out, the image will disappear. The mug is made from quality materials and can hold 11 oz of liquid. While it’s a sturdy mug that’s perfect for hot chocolate or a morning cup of coffee, the morphing features also make this something you’ll want to show off to your friends. 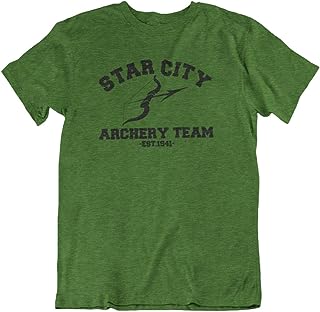 This clever shirt from Simplistic Geek is a subtle way to celebrate your love of comic books. The simple shirt, which reads “Star City Archery Team Est. 1941” will only be recognized by people that are familiar with the character. Fans of Green Arrow know that Oliver Queen resides in the fictional Star City and that he’s one of the world’s greatest archers. 1941 is the year when the character made his comic book debut. This is a comfortable men’s shirt made from breathable pre-shrunk cotton. It is available is sizes up to 3XL. Thanks to the shirt’s soft texture, you’ll never want to take it off! 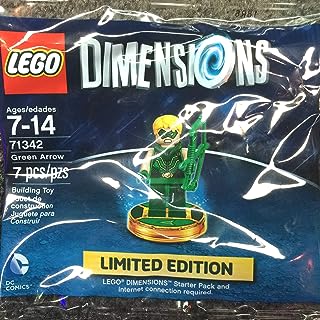 Within the last decade, LEGO has given more and more attention to minifigures. They are now sold separately in several forms, including the ever popular blind bagged assortments and single releases for LEGO Dimensions. This limited edition Green Arrow is an example of the latter. While it works perfectly well as a standard LEGO minifigure, it also gives you access to some additional content within the LEGO Dimensions game. Even if you aren’t interested in that kind of “games to life” platform, the figure itself is a winner all its own. It represents a very classic Green Arrow costume, making it essential for any DC collector.

If you are a fan of the DC Universe’s premiere marksman, this Green Arrow PVC figure will definitely be up your alley. Cast in a well sculpted pose by the talented Jonathan Matthews and decked out in his classic comic costume, this Diamond Select Toys release makes for an incredible display piece. It will steal the show in the midst of your other collectible figures and statues, or even work as a nice bookend on your graphic novel shelf. Coming in at 8 inches overall, it will give you plenty of stability. The price is more than fair and the looks are dazzling. What more could you want? 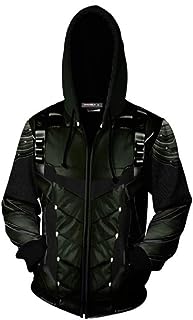 If you are a fan of The Arrow’s Oliver Queen, you can embody him by acquiring the Green Arrow hooded sweatshirt. This sweatshirt is made from a blend of high quality cotton and polyester which makes it extremely comfortable and stretchy. It is extremely lightweight and designed for wear when undertaking casual activities such as biking, hiking, relaxing at home, exercising or strolling down the street or beach. This stylish sweater comes in a range of sizes from small (S) to extra extra large (XXL). The best part is that is can be found in different colors like green or olive. You just have to choose the color that you feel makes you look most stylish and cool. With retail prices for this hooded sweatshirt starting at $30, this is a bargain you cannot afford to miss.

While plenty of people have dressed up like Green Arrow, this costume is anything but ordinary. Based on the battle uniform that Oliver wears in season 5, this detailed ensemble is sure to impress. This set includes nearly everything you’ll need for a complete costume, including a jacket, pants, gloves, mask, and quiver. The only thing you’ll need to supply is a set of boots. The costume is made from a high-quality PU leather and is designed to be comfortable to wear, even for long periods of time. This detailed outfit is ideal for conventions, cosplay, photo shoots, and even Halloween! 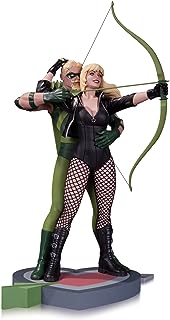 Green Arrow and Black Canary are one of the most iconic comic book couples. Now, you can enjoy seeing the pair together when you display this 12″ tall. The statue is based on Green Arrow/Black Canary #1’s cover, which was drawn by artist Cliff Chiang. It was sculpted by Jack Matthews and features a number of charming details, such as the heart-shaped base. Black Canary’s stockings are even made from real fishnet material! There are only 5,200 copies of this statute, making it a true collector’s item. If you’re a fan of DC Comics collectibles, this statue is a must-buy!