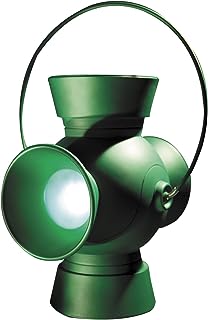 Green Lantern Power Battery and Ring Members of the Green Lantern Corps derive their powers from a ring, which is charged by a power battery. Now, fans can pretend they’re a member of the Corps with this incredibly realistic prop. The power battery stands at 11.5 inches tall, which is 1:1 scale. When the included ring is close to the battery, the battery lights up, creating an effect that’s straight out of a comic book. This is a brightly-colored prop that’s sure to stand out on your shelves. The light up effects will impress friends and family members, and the realistic prop will help to bring your favorite stories to life.

For True Collectors – The Kotobukiya DC Universe Green Lantern Art FX Statue For those who want a piece of collectible art – and who want to show their fandom as far as the DC Universe if concerned, – and of Green Lantern in particular this 14″ tall in 1:6 scale classic Lantern figurine ticks all the boxes. Firstly, it is a a Kotobukiya import from Japan (designed by Jim Lee) – and that studio is known to produce some of the best quality figurines in the world. This figurine shows Hal Jordan, the first human to join the Corps – and a founding member of the Justice League, ‘floating’ – about to use the ring. The statuette itself is magnificently crafted and perhaps sums up why the character has grabbed the attention of so many followers. 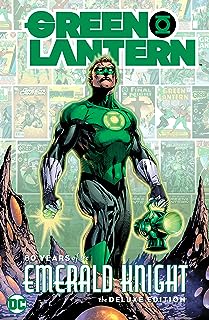 Why You Should Buy Green Lantern – 80 Years of the Emerald Knight? Are you an avid DC fan? Well, as DC celebrates its 80th anniversary, you can celebrate with them too, by purchasing Green Lantern: 80 Years of the Emerald Knight Deluxe Edition. This new hardcover book uncovers the legacy of Green Lantern. It contains the full story of the birth of Alan Scott and how his character was reborn in 1959 as a part of the test pilot, Hal Jordan. Hal is one of the fiercest heroes from the DC Universe and would put everything in line to serve justice across the galaxy. Read more about this fearless hero in the book. It’s a must-read for Green Lantern lovers. 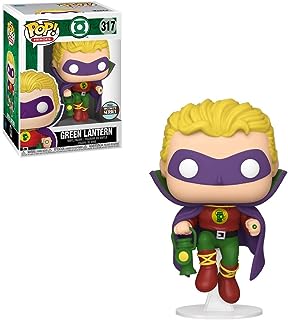 Collect Them All – The Funko Pop Green Lantern Specialty Series Funko Pop! figurines are the latest must have collectible for those who are interested in the DC Universe – and this incredible collectible from the ‘Green Lantern Specialty Series’ isone that true collectoprs (and ordinary fans) will not wish to miss. This vinyl figurine, which snaps into its base is ideal for display at home or in the office – or keep it in th box and see an investment climb in value. It’s officially licensed so you know ypou are getting the real thing. The original Green Lantern outfit gives it talk value – this is the ideal gift for those whose love will always be DC. 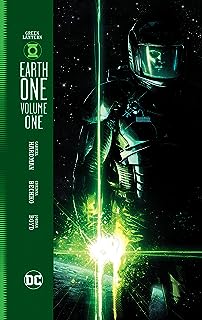 Green Lantern: Earth One Fans of Green Lantern comics have watched Hal Jordan take on countless challenges. Now, this book gives them the chance to see where things all began. This comic from Gabriel Hardman and Corinna Bechko chronicles Jordan’s first year in the Green Lantern Corps. The hardcover title is packed with adventure, from fights against deadly machines to visits to alien planets. This is designed to be a self-contained story, and because it starts at the beginning, it’s suitable for all readers, even those that are new to Green Lantern. This is a gripping, creative work that readers of all ages will appreciate. 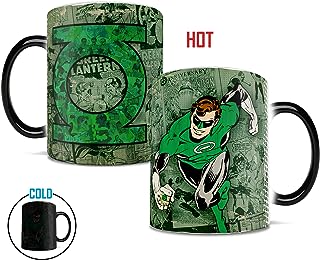 There’s Nothing Wrong With A Bit Of Nostalgia – Get It With The Green Lantern Retro Logo Morphing Mug From DC Comics Green Lantern is oneof the most iconic figures in the DC Universe and celebrating his legacy with the Green Lantern Retro Logo color and image changing mug is just about the perfect way to enjoy the drink ofyour choidce and step away from the cares of the mundane world for just a while. The 11oz mug broods in darkness, but displays the classic Green Lantern ‘ring logo’ and reveals the classic Hal Jordan in full Green Lantern mode when hot liquids are added. It’s also officially licensed so that you know you are getting a quality product. The perfect gift for those in love with comics – or the DC Universe itself. 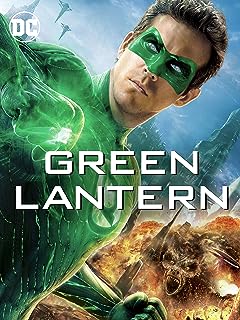 Green Lantern: Extended Cut Let’s face facts: the 2011 live action Green Lantern film did not perform as expected. It was met with lukewarm reception at best, and it didn’t exactly light the box office on fire. It had such a bad reputation that any plans of building a cinematic universe with the then-current character had to be reworked, and it took a lot of convincing for Ryan Reynolds to headline another comic book movie later on with Deadpool. Even so, the movie has gone on to find a fanbase with a strong cult following. Available now with all of the missing bits restored, you can check out the Green Lantern: Extended Cut and make your own mind up! 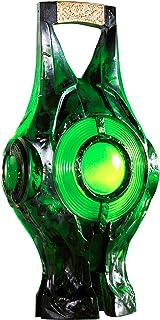 Recharge Your Collection With The Green Lantern Movie Power Lantern As every fan knows the source of the Green Lanterns power comes from the lantern that is within his grasp. But for those who want the power of Green Lantern’s light there is unfortunately no other option but to have a facsimile for the collection. The Noble Collection Green Lantern Movie Power Lantern is just about as close as you are going to come to having the real thing. This is no toy,it is a full sized prop immitation from The Noble Collection and licensed by Warner Brothers and DC. You willnot be getting some cheap knock off – this is great collectors item for lovers of the DC Universe.

What Makes the Square Enix Green Lantern Action Figure a Perfect Gift? The Square Enix Green Lantern Action Figure is an ideal gift for any DC fan. Its texture resembles carbon material, making it tough and durable. The primary armor looks stylish with a steel-green finish, while the legs and arms give a chrome-plated look. Lantern’s Power Ring glows in the dark, making it seem as if the ring is radiating green energy. The metallic colors, together with the intense face sculpt, gives the figurine a realistic appearance. Moreover, you can change the position of the limbs to make Green Lantern pose in different action stances. It doesn’t topple easily, thanks to the display stand, making it a perfect figurine for computer or study tables. 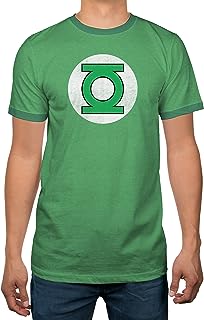 Show Your Allegiance To The Real Ring With The DC Justice League Green Lantern Mens T-Shirt ‘In brightest day, in blackest night – no evil shall escape my sight.’ The original credo of the Green Lantern corps. Wear the iconic Greeen Lantern ring image as a badge of pride with this Cotton/Polyester Blend T-Shirt. Available in sizes that will suit men, women and teens this classic T-Shirt is the perfect ‘must have’ for those who love the DC Universe. It’s official DC merchandise and the Justice League emblem of Green Lantern’s ring is perfect for those informal times when you want your fandom to shine through. The vinatge look is just perfect for establishing your dominance of will over those who do not possess the ring. Great gift for anyone interested in DC. 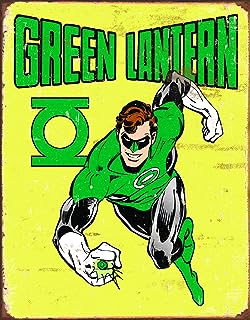 Proudly Display Your Allegiance To The Green Lantern Corps With The Retro Green Lantern Tin Sign This tin sign is the perfect addition to that man cave (or woman’s cave), study, bar or dorm room. It is a great wall hanging for those with a love for classic comic books and the fascinating story of Hal Jordan and his involvement with the Green Lantern Corps. The pre-drilled holes make it easy to hang and the rolled and hemmed edges make it ultra-safe to handle. This licensed sign, manufactured by U.S.A. company Desperate Enterprises is the perfect example of why retro collectible tin signs are so popular. Measuring 12.5″W x 16″H this is the perfect item for display in a number of environments – and is sure to be a talking point. 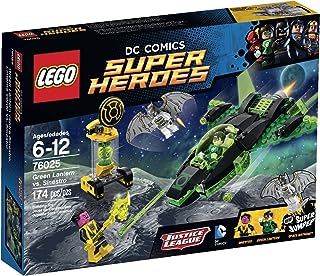 LEGO Green Lantern Vs. Sinestro Description If you like comics then you’ll love the LEGO Superheroes Green Lantern Vs. Sinestro set. This set contains a spaceship for Green Lantern that you get to build. This ship has 2 stud shooter, a couple of spring-loaded shooters, a rear control, and elements that are a translucent green color. Not only do you get a Green Lantern minifigure, you also get Sinestro and a special Space Batman that are exclusive to this particular set. It’s a great set that is good for children that are good with following directions and that are able to handle small pieces since this set contains them. 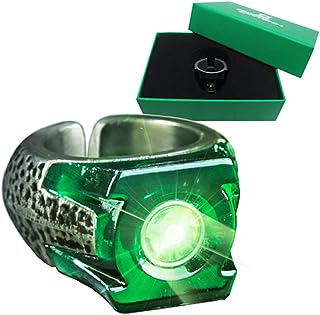 Harness Your Will – And Own A Collectible With The Animewild Green Lantern Light-Up Ring For alllovers of the DC Universe there is no more iconic characterthan Green Lantern – and all who are fans know that his power centers around his ring and the willpower that he can harness through its use. This incredible collectible is the perfect centerpiece for any Green Lantern collectible collection – and the bonus is that when it loghts up it will imediately draw attention to any Green Lantern costume – or make you the star of your own show. It will fit adultfingers as well as those who are being introduced to the mythos of Green Lantern. The presentation boxmakes it an ideal gist for those who are Lantern fans. 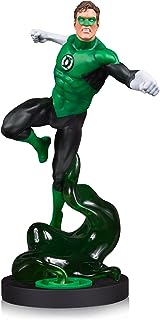 Green Lantern by Ivan Reis Resin Statue Sculpted by talented artist Tony Cipriani and based upon stellar artwork from Ivan Reis, this Green Lantern resin statue is a true masterwork. Coming in at 12 inches with the sculpted base, this Polynesian beauty is part of a limited 5,000 piece run. It captures the iconic Hal Jordan design in a high intensity action pose that perfectly captures the spirit of the character. Despite the premium quality, you’ll fortunately be able to grab this piece for a relatively low price. If you’re a big fan of DC and Green Lantern in particular, this will make a fantastic centerpiece to your collection. 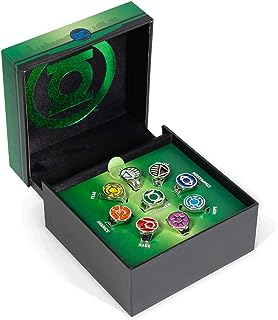 The Collectible Green Lantern Power Rings With Display Case Green Lantern in his many guises and many personas wields a ring that harnesses his willpower to provide a physical embodiment of his imagination – as every fan knows. Every fan also knows that there are several rings aside from the green willpower ring wielded by Earth’s Green Lantern. These rings are employed by the Lantern Corp a cross the universe. This incredible 9 ring set is officially licensed from the creators of Green lantern – DC Comics – and each of the 9 rings (presented in a clamshell case ideal for display) represents one of those rings used by the Green Lantern Corp (for example red represents rage, orange for avarice, Yellow for fear and so on). Crafted from metal with an enamel inlay this collection is perfect for the collector who wants a display pieces that represents his or her love for the DC Universe. The rings can actually be worn and are adjustable for finger sizes 9-12