Guardians Of The Galaxy Merchandise

The Finest Guardians Of The Galaxy Merchandise & Gifts 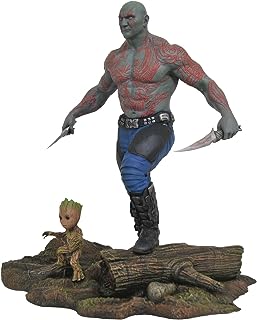 Once Guardians of the Galaxy graced the silver screen as yet another installment of the Marvel Cinematic Universe, audiences all over immediately took to the lovable misfit cast of characters. The comic was never one to reach “household name” recognition up to that point, but its mainstream adaptation won fans over far and wide. By the time the sequel rolled around, Drax and Groot in particular were among the most widely beloved. This statue features the pair as seen in GOTG Vol. 2, and they look absolutely spot on. The likenesses are impressive, Groot is appropriately adorable, and Drax is every bit as formidable as one would hope. If you’re a big fan then this is a must-have item! 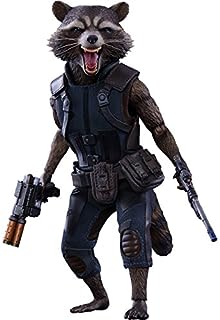 Rocket Raccoon is one of the most popular characters in the Guardian of the Galaxy films. If you love this character, you’ll want to take a closer look at this high-quality 6-inch figure. This is a premium-quality statue that is perfect for collectors. It is beautifully painted and has a great deal of detail. The accessories make the statue look even more like the version of Rocket that appears on silver screens. Whether displayed on its own or alongside other figures, it’s a wonderful item to have in your collection. This toy is not suitable for children under three years of age. 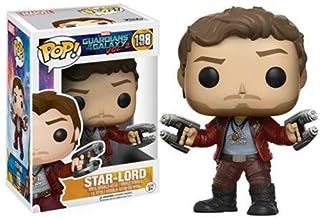 If your kid loves Guardians of the Galaxy, you should definitely present the Star Lord Mixed Tape Funko to him/her. It is a fantastic item for your kids. They will love this pop for its many features. This pop comes with the exclusive box lunch sticker on the front window. It is the official pop figure available on the market today. The figure is securely packed in a double box and insulated for better protection and so that the pop doesn’t get damaged when shipping. The little headphones and cassette player are integral parts of his character. Make sure you purchase this pop right now. 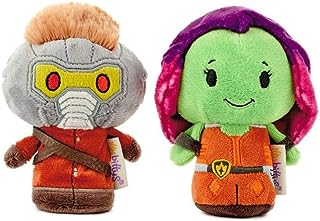 If you are a big fan of the Marvel universe and you like your collectibles somewhat off the beaten path, these Star-Lord and Gamora plush toys are going to be right up your alley. Most merchandise for Marvel focuses on the action oriented aspects of each property, with plenty of stern facial expressions and weapons drawn. These on the other hand are downright adorable caricatures that evoke fun above all else. Seriously, you’d be hard pressed to find cute depictions of these two. They are probably made for kids, but who’s to say older collectors can’t enjoy them as well?

Guardians of the Galaxy Omnibus 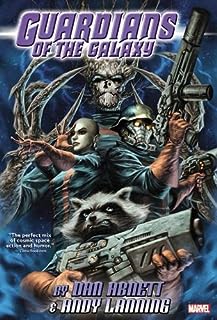 One of the more popular movies to come out in recent years is called Guardians of the Galaxy. It is a movie that depicts a wide variety of protagonists and antagonists, all of which are working toward either saving or destroying the universe. There are multiple characters which are well known, each with their own powers and unique characteristics. This includes Racket Raccoon, Adam Warlock, and Mantis to name a few. If you would like to play a game that would put you right in the midst of this action, you should consider looking at Guardians of the Galaxy Omnibus today. 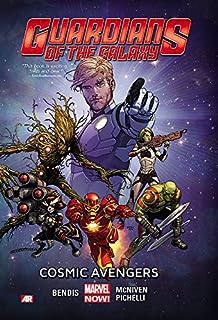 The Cosmic Avengers story-line is one of the more popular modern takes from the Guardians of the Galaxy comic series. With writing from the ever prolific Brian Michael Bendis and the one-two punch of Steve McNiven and Sara Pichelli trading off on illustration, this fun bit of GOTG lore throws Iron Man into the mix. It’s a recipe for success, as the famous armored hero bounces off the likes of Rocket Racoon, Drax, Gamora, and Star Lord quite well. Cosmic Marvel stories are always full of wonder, imagination, and gorgeous outer-space imagery. All of that is present here and more, and you can get started with Volume 1 for less than 15 bucks!

Guardians Of The Galaxy Vols 1 & 2 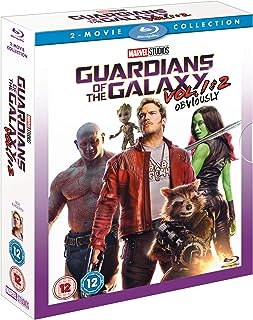 When the first Guardians of the Galaxy movie hit the Silver Screen audiences were immediately entranced by the humor and sheer adventure of a team of unlikely (and initially at least, criminally inclined) allies led by Earth abductee Peter Quill (known as Star-Lord) who find themselves as unlikely saviours of the galaxy itself. Now those who want to experience the sheer fun of the first and second Guardians movies can own their own Blu-Ray copies. The set includes such extras as the making of Guardians of the Galaxy Volume 2, a great ‘Guardians Inferno Music Video’, deleted scenes and much more. This two disk set is the perfect Marvel collectors item – and is a great way for the entire family to enjoy movie night – and the DTS 5.1 surround sound is a delight.

Marvel’s Guardians of the Galaxy 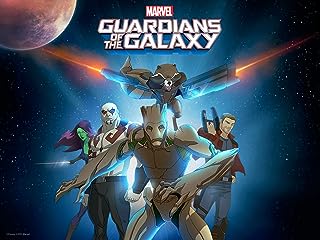 Lovers of Marvel were in for a treat when both instalments of the love action Gurdians of the Galaxy movies arrived in theatres. The adventures of smugglers and misfits who made up the team led by Star-Lord were an absolute delight. That rollicking adventure continues with the Guardians of the Galaxy animated series. Each episode is available for streaming – and provides even more excitement and insight into the characters (with much loved personas such as Groot, Rocket Raccoon, Gamora and Star-Lord himself at front and center). The series is fun for the whole family – and is perfect for relaxed mornings viewing. Each episode is a great addition to a growing marvelcollection. The animation is top class and the voice acting (and plots) add to the fun.

Guardians of The Galaxy Card Game 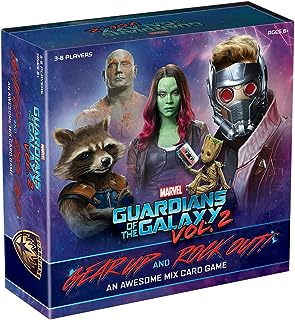 The Guardians of the Galaxy Volume 2 playing card game is a fantastic card game providing all-new game-play with all your favorite characters from the famous movie franchise. In this game, you get to play as one of your favorite intergalactic heroes doing whatever you can to not end up with the lowest-quality gear. The Gear up and Rock Out game also features event cards that add new twists to each round, with “all bets off” as soon as “ego comes into play”. This is the ideal game to enjoy with any Guardians of the Galaxy fans. The game is all about stealing, bluffing, and trading.

Guardians of the Galaxy Monopoly 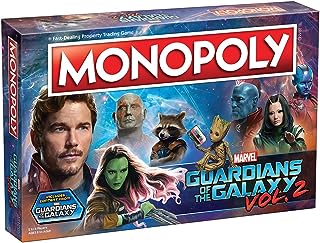 The Guardians of the Galaxy Volume 2 edition of Monopoly by USAOPOLY, is the ideal board game for all the fans and followers of the Marvel Cinematic universe. The board comes in a brightly colored and durable box, including well-sculpted pieces and 6 collectible customized tokens. The renamed hotels, equipment, and houses are also textured, with clear-galaxy blue dice. This version of Monopoly involves recruiting your favorite characters from the famous Guardians of the Galaxy films, double-crossing your opponents while collecting bounties. Recommended for ages 8 and up, this board game is the ideal gift for any Guardians of the Galaxy fans. 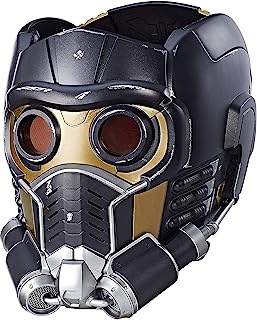 Do you or one of your kids want to take on the role of Star-Lord? Because this premium electronic helmet from Marvel will definitely help you get into character. Firstly, it features incredibly detailed decor and finishes. That means nobody who is familiar with Marvel legends will confuse you with anyone else other than Star-Lord. Thanks to LED lights, the eyes can glow red while electronic sound effects make the experience more realistic than ever. The helmet is designed to accommodate most head sizes and types, but it also comes with built-in speakers. These are combined with high-tech music detection technology if you want to listen to your favorite tunes while wearing it. 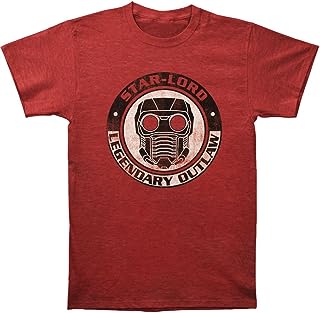 Guardians of the Galaxy took audiences by storm when the first instalment of the moviehit theatres in 2014. It intro duced a raft of characters based on Marvels comic book series – among them Peter Quill – otherwise known as Star Lord. Now Marvel Cinematic Universe fans can own a 100% classic T-shirt featuring a Star Lord’s well-known mask and the legend ‘Star Lord legendary Outlaw. This official merchandise is fully washable and is available in extra large – a perfect compliment to a man’s wardrobe. Stylish and comfortable, this burgandy retro print T-shirt is the perfect gift for lovers of both Marvel – and the Guardians movie franchise. 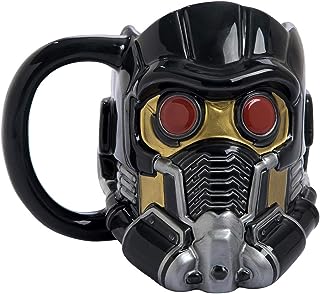 When Guadians of the Galaxy was released in 2014 it become an instant classic with Marvel fans. The first release (known as Volume 1) of the movie franchise introduced cinemagoers to a crew of unforgettable characters, among them Peter Quill, the loveable rogue and (known as Star-Lord), leader of the space roaming band of characters who set up to save the galaxy. Fans of the movies now have the chance to own a highly detailed and painted ceramic mug modeled on Star-Lord’s well-known mask. The reproduction is perfect for holding the fans beverage of choice and the generous liquid capacity is the ideal size for lovers of coffee, hot chocolate – or any other refreshment. This is the perfect gift for the Guardians or Marvel fan – and the quality makes it the perfect addition to the lives of the legions of those who are die-hard Star-Lord fans.

Guardians of the Galaxy Lego 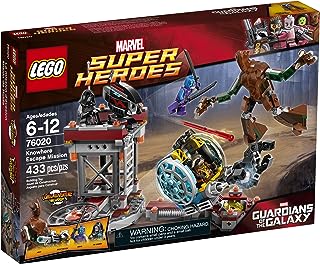 Let your child take control of their favorite Marvel superheroes with this Guardians of the Galaxy Lego set. With 433 pieces and 3 mini-figurines, you can keep your kids entertained for hours. The best part is that they can integrate this particular lego set with other popular lego bundles. It features a mining tower with a trap door while sporting cool weapons like a catapult and bazooka. The station also comes with a docking station that houses a mining pod. To make the set even more exciting, an exclusive Groot figure is included which can be adjusted into several different poses. 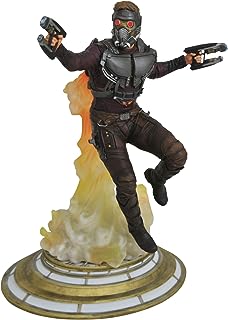 Star-Lord may not have been the most popular comic book hero or a household name before the Marvel Cinematic Universe took off, but that’s ancient history by now. Thanks to his fun live action portrayal from Chris Pratt, he is a fan favorite across the board. If you are a big Guardians of the Galaxy or MCU fan in general, you will definitely want to consider grabbing this Star-Lord statue from Diamond Select. It stands around 10 inches tall and features an incredible sculpt. The dynamic pose couldn’t possibly look cooler, and every detail of the movie costume has been perfectly captured. Best of all, Diamond Select has released this at an incredibly low price point.