I just love it when Harley Quinn calls the Joker, Mr. J. It just has a great ring to it. Therefore, we were so excited to search for some very cool Harley Quinn Gifts. Because we can’t leave her out our of collection of gifts for geeks. Do you actually know how Harley Quinn became what she is today? Because she wasn’t always like this. She used to be Dr. Harleen Frances Quinzel who worked at Arkham Asylum as a psychologist. But that took a dramatic change when she fell in love with the Joker and became his beautiful and funny partner in crime. 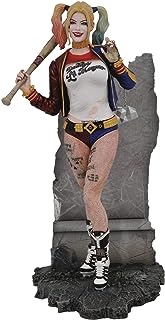 The DC world features many characters that include both superheroes and supervillains. One of them is the Suicide Squad’s, Harley Quinn. Harley is a villain with superhuman powers, otherwise known as a supervillain. She’s also the girlfriend of another DC supervillain, the Joker. Despite being a supervillain, Harley Quinn is a favorite of many DC fans, and you can celebrate her in a beautiful multicolor PVC statute. Created in the image of Harley Quinn, played by the actress Margot Robbie, in the extended universe Suicide Squad film, she is 4 x 4 x 9 inches and wears the Harley Quinn costume depicted in the movie. Find It Here 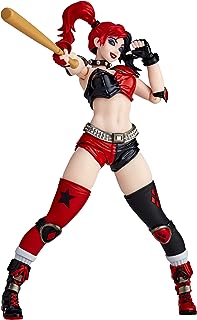 Is there any comic book fan that does not adore Harley Quinn? I think it could be said that many of us obsess over our favorite Gotham City gal! For the first time, Harley Quinn smashes into the Kaiyodo impressive Yamaguchi action figure lineup. And I think it is safe to say all is right in the world once again! She features 46 points of articulation, allowing you to pose her in just about any imaginable position. This beautiful Harley action figure also includes a variety of accessories including interchangeable hands, a baseball bat, mallet, and roller skates. Add her to your collection today for a great conversation piece. Find It Here 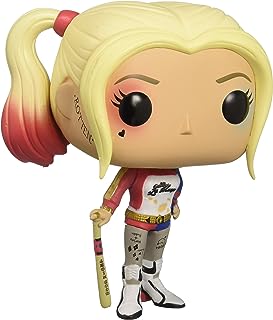 No one could ignore the fact that the character of Harley Quinn is one of the most striking in the DC universe – it just matters what she’s going to strike you with. But this Suicide Squad Pop! Vinyl Figure puts the cute into killer. At nearly four inches tallthis officially licensed Harley Quinn Funko is the perfect addition to anyone’s Suicide Squad collection. Harley Quinn has become an iconic DC character so you could keep her in the window display box and make an investment in the continued popularity of this iconic character – or simply take her out and share and enjoy her unique view on life. Perfect for collectors. Find It Here 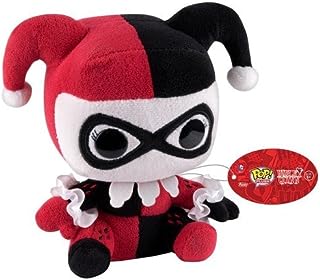 Harvey Quinn might now be one of the most iconic figures in the DC Universe – but she doesn’t exactly look cuddy. That’s about to change with this ‘Funko POP Plush Regular Heroes Harley Quinn Toy Figure’. Harley is just about as cuddly as she’s ever going to be with this 6in POP Plush from Funko!. At around 6 inches tall this Harley is the perfect addition to any DC fan’s collection. This is Harvey Quinn at her most huggable best. It’s the perfect addition to any DC collection – or gift for yourself or that younger person who you want to cuddle up to all those magnificent comic icons. Find It Here 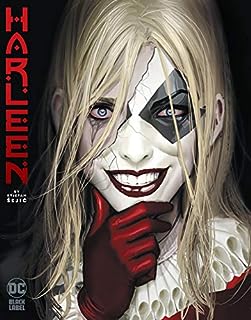 Sadly, many main stream comic book fans only know Harley Quinn as the woman with a bat and a thing for the Joker. However, there once was a time when she was a brilliant young psychiatrist by the name of Dr. Harleen Quinzel. This is the New York Times bestseller that is solely devoted to the telling of her story. We finally get to see the origin of Harley Quinn through the eyes of Harleen herself. Full of amazing art and an engaging story, this is truly a graphic novel no Harley fan should be without. Finally, the story about Harley that we all wanted! Find It Here 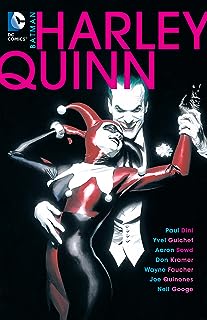 Get an insight into the fascinating story of Harley Quinn and her relationship with the iconic villain, Joker, in this 2015 comic written by Paul Dini and illustrated by Neil Googe. This is a must for anyone who is a fan of Harley Quinn or the Batman universe, showing her transition from psychologist to super-criminal. Wonderfully illustrated and well-written, the title adds depth the character and is a good opportunity to explore the world of Batman from a different perspective. Ideal for lifelong fans of the comic books and those who found the Batman universe thanks to the recent movies. Find It Here 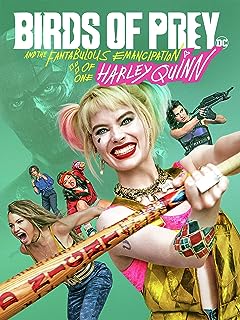 Birds Of Prey And the Fantabulous Emancipation of One Harley Quinn

Let’s be honest; you may have heard this was a not so good movie. Not what you were expecting to hear right off the tip of Harley Quinn’s bat! However, this a real gem of a film that you need to make a couple of hours available for. The movie has action, comedy, and a fabulous cast! While this is not a life-altering movie, it gives some insight into the always enjoyable Harley Quinn, played flawlessly by Margot Robbie. This is a colorful movie that still maintains that dark DC atmosphere. Spend the night with Harley and her gang as they try to make things right in the city of Gotham! Find It Here 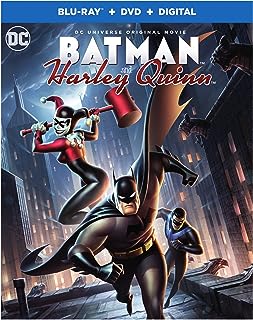 For lovers of the latest cartoon series the relationship between Harley Quinn and Batman is…. compicated. However, this Blu-Ray DVD set allowsthe DC fan (and fans of both Harley and the Batman) to immerse themselves in a storyline that is perhaps a little more mature than most. It’s over an hour of incredible cartoon animation for those who are fans of the Batman – and Harley Quinn. It explores depths of character that are not usually found in your traditional morning cartoons- but for those who want to delve a little deeper into the mythos of these two iconic characters it is the perfect entertainment. Find It Here 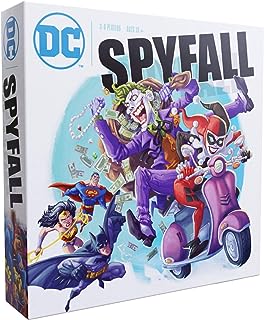 Beloved heroic characters, such as Superman and Batman, and infamous villains, such as the Joker and Poison Ivy, are all part of the DC Entertainment world. There are many fun DC activities, like the DC Spyfall game produced by the Cryptozoic Entertainment Store. DC Spyfall is a social deduction card game that features DC heroes and villains. For ages 13 and up, three to eight players can play DC Spyfall, where you can take on DC characters’ roles. The game is standalone, fun to play, and easy to learn. It is also compatible with other Spyfall games. Included in the game are 196 cards, 24 storage bags, and a rulebook. Find It Here 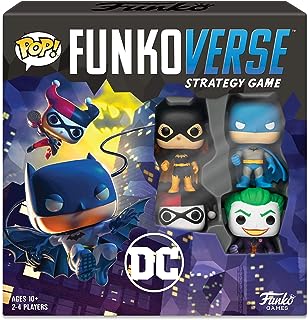 If you love Funko Pops, DC Comics, and board games, you’re going to fall in love with the Funkoverse: DC Comics 100 4-Pack Board Game. This game allows you and your friends to go on adventures with beloved characters like Batman, Batgirl, Harley Quinn, and the Joker. It’s compatible with other Funkoverse games, but it can also be enjoyed on its own. The game comes with two playable maps, as well as two Funkoverse Pop! Game figures that you can get anywhere else. It can be enjoyed by 2 to 4 players, with games lasting somewhere between 20 and 60 minutes. Find It Here 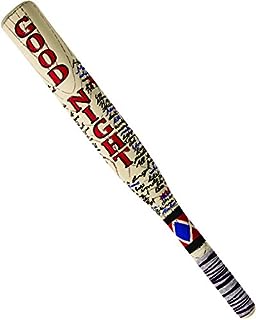 It would appear that Gotham City is in serious need of some cleaning up. However, Batman and Robin are just not available at the moment. So, who else are you going to call to clean up the street of Gotham? No other than the talented and beautiful Harley Quinn! While she may walk the streets of Gotham a little unbalanced, she always gets the job done. You can take up her mantle with your very own Harley Quinn bat. I promise you by walking your streets with this officially licensed 22.5-inches long x 2.75-Inches around bat; no one is going to ask you any questions. And if they do, the last thing they will see are the words “Good Night” which feature prominently on the bat! Find It Here 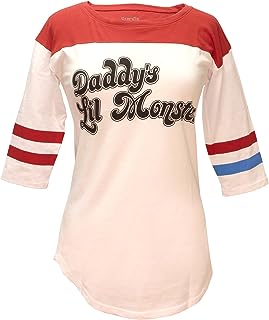 For all the Harley Quinn fans that want to stand in her shoes, so-to-speak, this deluxe costume could be exactly what you are looking for. It is an original outfit directly from the Suicide Squad brand, which means the costume pays attention to detail. The total package includes the “Daddy’s Little Monster” shirt/pullover, the shorts, the fishnet tights, and even the belt to round everything off. So, you won’t have any problem looking like your favorite Suicide Squad character. Wear it to a party, on Halloween, or when you just feel crazy around the house, because Harley is always ready to come out. Find It Here 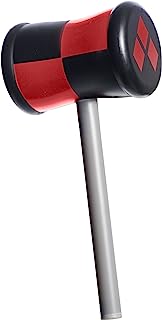 She may now carry a baseball bat on the silver screen – but for true lovers of DC’s most psychotic fem fatale there can only be one weapon – the Harley Quinn Mallet. This authentic (and licensed) DC repica measures 13. 25″ x 6. 5″ x 4. 5″ and is perfect for correcting the behavior of evildoers orfoes in general – or just as a prized part of a DC collection. Of course – it also fits in perfectly when you are attending that convention dressed as the Joker’s ex flame. Put it in the corner of your dorm room or den or take it out and be the envy of other Harley Quinn wannabees. Find It Here

This striking Harley Quinn Rebirth PVC Figure was designed by world-renowned artist Joseph Michael Linsner and sculpted by Sam Greenwell. She is absolutely gorgeous with vivid colors and stands a very generous 9 inches tall on a flattened deck of cards. Harley has been perfectly captured in a cast in high-grade plastic that still manages to show off her sprit and trickster nature. Harley oozes sex appeal in this form whether she is left in the display box or placed at the center of a collection on a shelf. Any Harley or comic book fan would be overjoyed to wake up looking at Harley Quinn every day! Find It Here