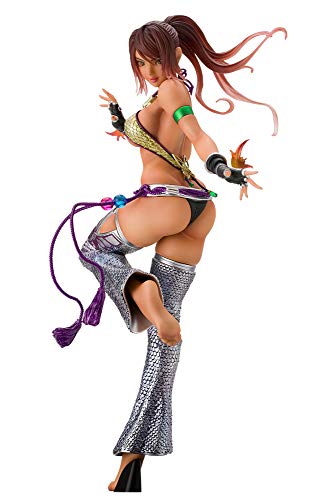 First appearing in 2001’s Tekken 4, Christie Monteiro became a fan favorite right from the start. With her bright colors, larger than life personality, and flashy capoeira fighting style, she was among the most commonly used fighters from that particular roster. This Kotobukiya Christie Monteiro Statue captures her primary design quite well, complete with a capoeira style pose and intricately detailed clothing textures and flowing hair. She stands just under 10 inches tall atop a small base for stability. If you are a long time fighting game fan or figure collector, this addition to your collection will liven it up perfectly. 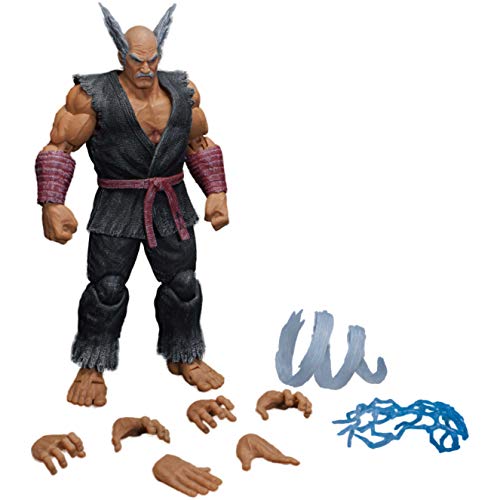 Heihachi Mishima by Storm Collectibles is a perfect representation of Tekken 7’s action figure. Weighing 12.8 ounces, Heihachi is a perfectly detailed sculpt. Musculatures and wrinkles portray the best look of this action figure. You feel the sense of power by just glancing at Heihachi. With alternate hands and heads, you can get the best fighting poses from Heihachi. Soft rubber makes up the upper body. This leaves room for the extension or compression of the joints. You can easily tilt Heihachi’s head since it is strongly fixed to his neck. The shoulders also give you a great range because of their butterfly joints. Still, he can deliver great kicks. This Heihachi Mishima toy brings the best out of the action figure’s character. 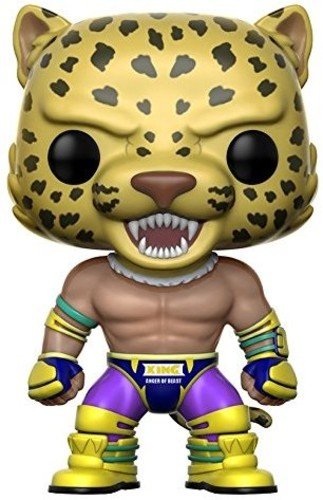 Tekken is undoubtedly one of the most world renown fighting game genres, and King is among the most recognizable of all the characters featured throughout the series. Thanks to his wrestling motif and signature jaguar mask, the popularity of this character has endured for nearly 30 years now. As you might expect, his trademark design has been translated into Funko Pop form quite successfully. The colors are stunning and the feline mask gives a unique aesthetic that’s just as riveting here as in any of his game appearances. This is a must have collectible for any fan of Tekken, fighting games at large, or Funko Pops in general. 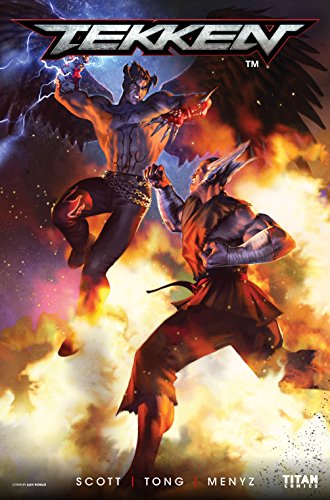 Available digitally through comiXology and Kindle or in physical form through secondary sellers, Tekken #1 from Titan Comics brings the classic fighting game franchise into the comic book world with a bang. The stellar artwork from Andie Tong shifts all of the dynamic action and power of the games to the forefront, and the writing from the seasoned Cavan Scott does a fantastic job of streamlining the franchise’s vast narrative. Tekken mainstays and fan favorites like Nina Williams, Heihachi, Jin Kazama, and Yoshimitsu are all featured prominently. If fighting games and comic books are among your biggest hobbies, this crossover can’t be missed. 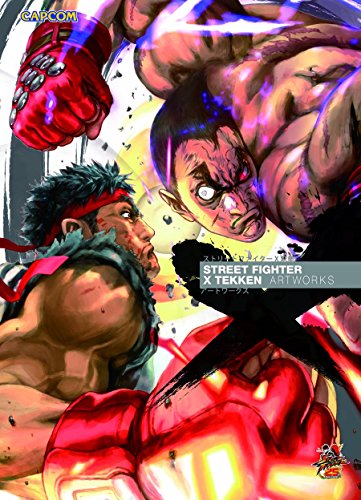 Street Fighter X Tekken was a highly ambitious crossover that brought the casts of Street Fighter and Tekken head to head. Based largely upon the wildly popular Street Fighter IV, the game took some slight risks such as placing the action solely in 2.5D whereas Tekken gameplay is famous for being a more fully realized 3D. While the game did not take off as the financial success that Capcom and Namco hoped, it did well within the competitive circuit and it still lives on as a cult favorite to this day. With this Street Fighter X Tekken Artworks compilation, you can celebrate a wide variety of incredible concept and promo art from the project. This is a fantastic celebration of some of fighting game’s most beloved characters. 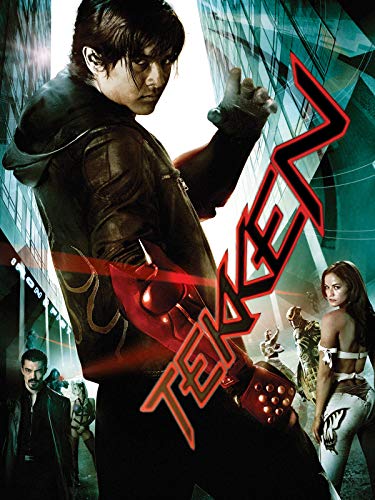 Tekken is a popular movie based on the game, and it’s set in the year 2039. The movie follows a warrior who finds himself in a world that has been destroyed and plagued by world wars. The most powerful corporation of all is Tekken, which is one of the corporations that are running the world and controlling different territories. If you are a fan of the Tekken video games, then you’ll love this movie because it features familiar characters, and you’ll notice that many of the characters are in costumes that are extremely similar to the ones worn in the Tekken games. 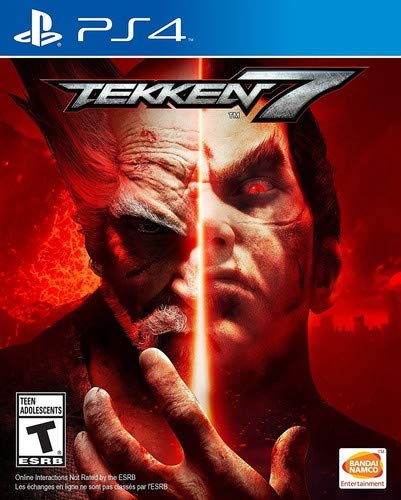 The latest iteration of the king of all 3D fighting games, Tekken 7 has seen several successful years of content. Originally released in limited capacity through arcade machines in 2015, it first hit consoles in 2017. It has become a major staple of the competitive fighting game scene, and it is also a casual favorite given its slick visuals, lightning fast gameplay, and gigantic character roster. It has plenty of customizable costume options, a huge library of music, and dream worthy guest DLC such as Geese from King of Fighters and even Negan from The Walking Dead. Anyone with the slightest interest in fighting games should definitely pick this up. 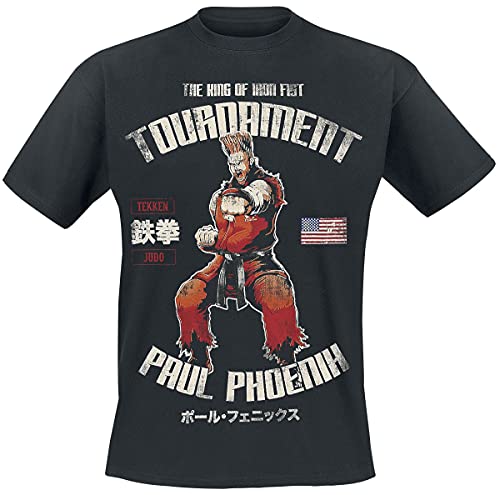 Manufactured from a solid breathable cotton construction, this Tekken Paul Phoenix shirt stands out from standard fare with solid high definition graphics. Distressed to give it a vintage flair, this is one welcome and comfortable addition to your gaming wardrobe. Available in men’s sizes small to extra large, you’re sure to find that perfect fit! Unlike other character shirts that require special care instructions, this Tekken Paul shirt is fully machine washable and is guaranteed to outlast any other shirt. As an officially licensed Tekken product, this is the perfect gift for any gamer or anyone wanting a bit of nostalgic flair in their lives. 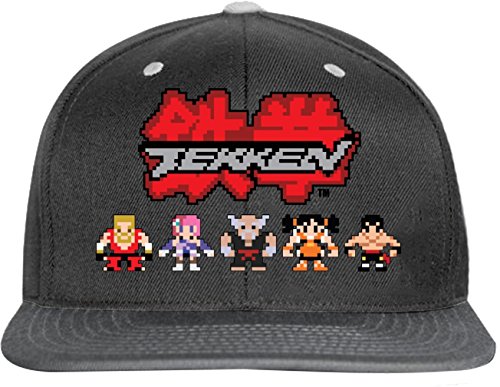 Take your personal gamer attire to a new level with the Tekken retro hat! This is a solid baseball cap featuring a detailed embroidered Tekken logo along with your five favorite characters. Set against a dark background, the solid logo stands out from afar and gives your wardrobe a nostalgic nod to the past. Manufactured with true attention to detail in every stitch, your Tekken baseball cap is a solid investment guaranteed to last for many years to come. Every cap is officially licensed so you get a peace of mind knowing you support the original creators of your favorite game! 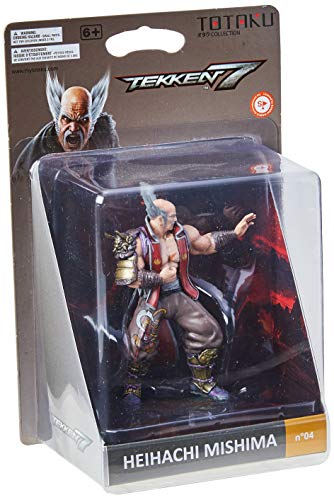 The Totaku Heihachi Figure is a 2 to 3 inch PVC figure featuring the famous Tekken character from his appearance in Tekken 7, the latest iteration of the legendary fighting game franchise. This figure line rides on the coat tails of the popularity of Nintendo’s amiibo, featuring a number of characters from other franchises like Street Fighter and Crash Bandicoot. If you have enjoyed amassing large quantities of your Nintendo favorites or perhaps other similar collections like Skylanders, Totaku will be right up your alley. Tekken figures aren’t quite as ubiquitous as those from other fighting games, so it’s great to have an affordable, well made option for adding Heihachi to your display. 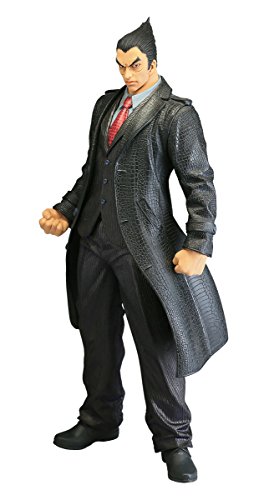 This Kazuya Statue comes from the talented collectible makers at Kaiyodo. They are among the most prolific manufacturers in Japan, and with this stylish piece their popularity is easy to understand. Cast in PVC, this captures the perfect middle ground between premium level detailing and affordability. The figure stands just under 10 inches and is sure to take up an imposing spot of prominence in any collection. Kazuya Mishima is one of the leading and most enduring characters of the Tekken franchise, and he’s never looked better. Any long term fan would be loath to miss out on this stunning piece. 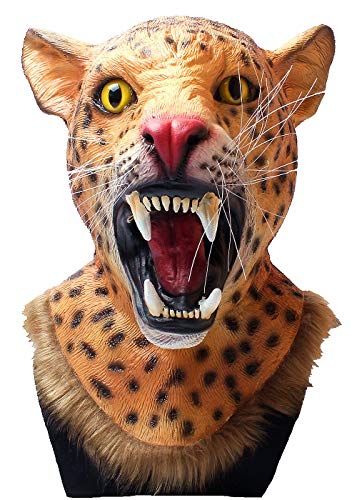 This panther mask can be the perfect choice for Halloween, for going out to a night club, or for a fun party with your friends. Made from eco-friendly, non-toxic, 100% natural latex, this realistic panther mask is roomy enough to fit children and adults alike. You can see wither through the nostrils or through the mouth of the beast. Even though it is soft to the touch, the latex is durable enough to withstand the challenges of a wild party night. Before wearing it, you should turn the mask inside-out, wipe it with a damp cloth and air it properly to remove the latex odor. 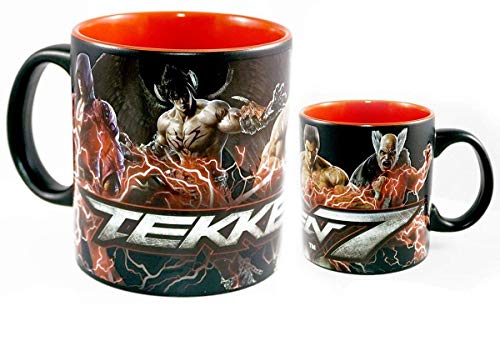 Warm up your favorite brew or scoop your preferred cereal every morning from this solid Tekken mug by Just Funky! Able to hold 20 fluid ounces of liquid, this mug is fairly large but easy to handle. Though not dishwasher or microwave safe, the sturdy ceramic construction ensures many years of service and takes this collector’s item to the next level. A solid black backdrop offers a creative background for full-color cameos of Kazuya, Jin, and Heihachi. This mug is fully licensed by the creators and makes the perfect gift for a retro gaming fan, or a great piece to add to your own collection! 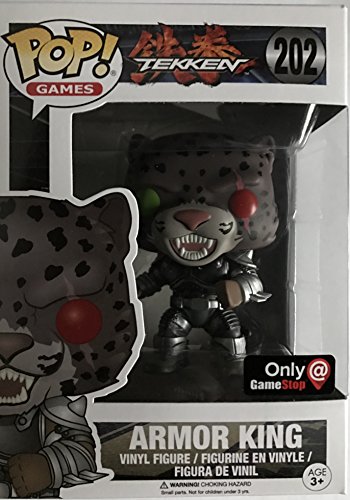 If you’re a fan of King from Tekken, it goes without saying that you’re probably going to have an appreciation for Armor King as well. While technically different characters with somewhat unique playstyles, the two are forever linked in the franchise’s story. If the simple, more traditional wrestler attire of King isn’t quite your cup of tea, the more elaborate design of Armor King might suit you better. Originally a GameStop exclusive, the iconic Tekken character is available here as a Funko Pop with incredible sculpting. The box is unique as well, but the figure looks so great that you’ll likely have a hard time keeping it sealed! 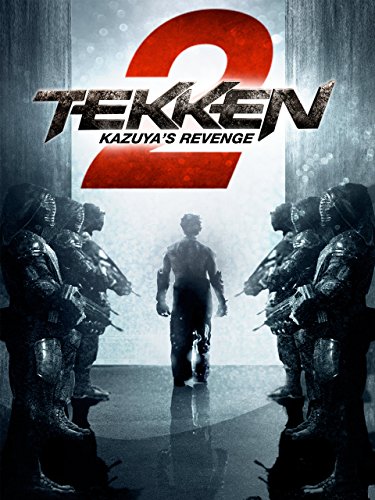 Tekken: Kazuya’s Revenge is another attempt in a long line of Hollywood video game adaptations. Its production was off the beaten path however, allowing for a slightly more game accurate result. Still, you shouldn’t go into this expecting a masterpiece. Temper your expectations and you’ll likely have a blast. This is the sort of movie that’s best enjoyed with friends, even if you have to arrange a Discord or Zoom watch-along. Of note, the cast features Cary-Hiroyuki Tagawa as Heihachi. Fighting game fans will remember his iconic turn as Shang Tsung in the 1995 Mortal Kombat film, and he’s just as marvelously villainous here.