Although less popular than Batman, I really like Nightwing! His very cool black and blue suit still gives me the chills when looking at it, he looks so cool in my collection. Therefore I thought it was time to line up my favourite Nightwing statues. Did you know that Nightwing first appeared in the Superman comics and only afterwards in the Batman comics? Well, he did. He already appeared in 1963 in Superman #158. Afterwards, he made his debut in 1984: Tales of the Teen Titans #44.

These are my favourite Nightwing Statues

Arkham City marked the second instalment in Rocksteady’s hit Batman game series. It introduced fans to characters we didn’t get a chance to experience in the first game, including Dick Grayson’s Nightwing. Fans of the Arkham video games will want to grab this limited edition figure for their collection before it disappears into the depths. The lifelike sculpting is done by the amazing figure artist Amos Hemsley which speaks to the quality of this sculpt. This 8.8-inch figure is perfectly in scale with the rest of the Arkham line and will easily fall into any Batman collection.

Fans will recognize the washed-out colour scheme with bright single colour detailing as an integral part of the Arkham noir feel. This sleek Nightwing statue comes ready for action, posed in striking detail to match the popular character design as he enters within the fortified walls of Arkham City. The original Robin comes equipped with his signature weapons, including the electrified blue points. Each piece of body armour is perfectly segmented with glossed black lines detailing every plate. Nightwing is fully equipped with all of his new gadgets to handle whatever Arkham has to throw at him. And he’ll need all the help he can get as he journeys into the darkest part of Gotham. 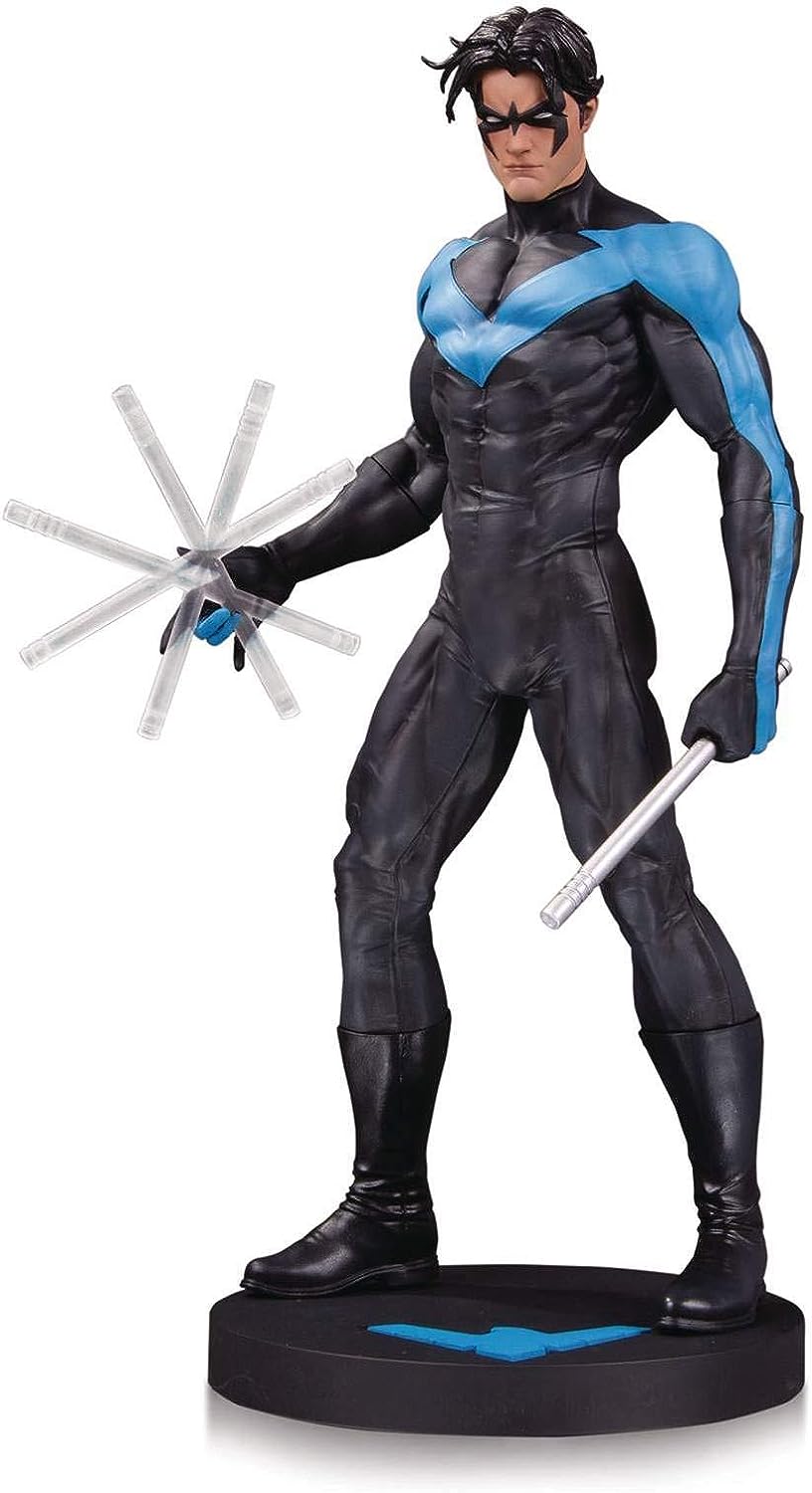 The DC Designer Series figures are based on the imaginative visions created by the world’s leading comic artists. This Nightwing figure is whisked straight from the pages of Jim Lee’s blockbuster series Batman: Hush, capturing one of the most iconic takes on Nightwing known to comic fans. The high-quality polyresin statue is sculpted by Alejandro Pereira, a well-known figure artist whose lifelike work captures the imagination of fans and rips action straight from the pages of comics.

Dick Grayson measures just under 13 inches tall and is limited edition meaning you want to pick him up before he is gone. He is individually numbered for your collection and comes equipped with the Boy Wonder’s twirling escrima sticks. This statue is so detailed that the back of Nightwing’s suit is even detailed with a zipper. The textures of the statue are varied, but they draw the colour scheme together. The paint job is what makes this statue truly stand out, transitioning from blue to black flawlessly. This figure is well worth the value and is a must for any Nightwing fan.

Barbara Gordon and Dick Grayson are one of the most iconic couples from the DC Universe. Their romance is captured forever in this Ryan Sook inspired statue. Wrapped together in an embrace as they hang via grapnel-gun, Batgirl and Nightwing are gazing lovingly at one another as they hang upside down. Thanks to the design of this statue, this fourteen-inch figure is able to be displayed standing freely upright or by mounting it to a wall, allowing you to hang the couple in the way they are meant to be displayed.

This beautifully detailed statue is sculpted by Paul Harding and features the New 52 costumes for some of the Bat Family’s most popular caped crusaders. The paint job on this figure is flawless and transitions through the different colours and shades with no colour bleed while the suits are highly detailed and feature all of the equipment the characters normally carry. This statue is a limited edition of 5000, with each statue individually numbered for added collectable value. If you are a fan of the Nightwing/Batgirl pairing seeking to expand your collection, this statue is sure to become a central feature on your display.