The Finest The Punisher Merchandise & Gifts 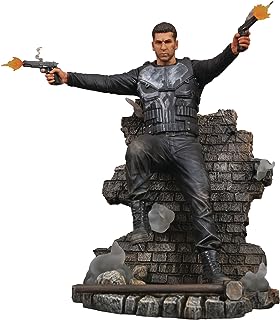 Next up from Diamond Select, the Netflix version of The Punisher has been given the collectible statue treatment. The likeness to actor Jon Bernthal is incredibly accurate, and every single detail of the costume has been accounted for. Every nook and cranny of the background has also been given a great degree of love and care. For added visual flair, the guns have flare effects and there’s also a bit of smoke present from incoming gunfire or fog. Equal parts moody and action packed, this statue does a fine job of capturing the mood of the most recent live action Punisher. 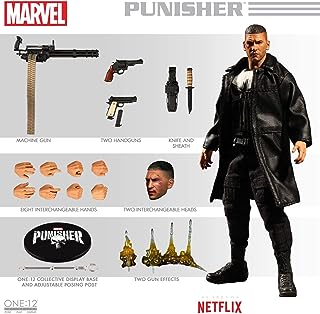 The punisher action figure uses a 1:12 scale which makes it 6 inches tall. It is well articulated with over 30 points of authentication. The costume is made from detailed cloth and the figure itself is vinyl. It has two different head portraits of the character from the popular Netflix TV program. Other important assessories that come with this action figure include cargo pants, a leather-like overcoat, tactical boots, utility vest, and a 3/4 sleeved T-shirt. It is an amazing collectible replica of Jon Bernthal that has been professionally detailed. The movable body joints and the replaceable heads are easy to position and change. 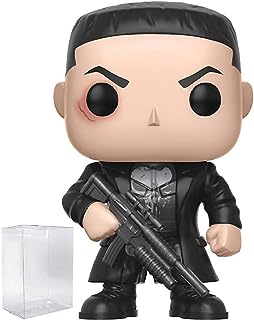 If you’re a fan of Funko Pop collectibles — or someone that enjoys The Punisher — you’ll want to take a look at this stylized vinyl figure. This toy is designed to look like the version of The Punisher that appeared on the Netflix Punisher and Daredevil series. It stands at just 3 and 3/4 inches tall, which means you can easily find a place to display it. It has plenty of features that will appeal to fans, such as the skull-logo t-shirt and the large weapon. Like all Funko Pops, it also comes in an appealing box that includes the figure number. 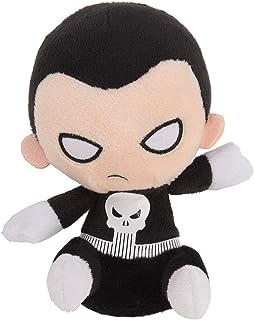 Although The Punisher is known for being darker and more violent than a lot of other comic book characters, this cute plush toy is anything but grim. The stuffed figure, which stands at 5 1/2″ tall, is instantly recognizable as Frank Castle thanks to the distinctive skull logo. You can purchase this toy on its own or collect other plush versions of your favorite Marvel characters. This is a great gift for someone that’s a big fan of the character, but you might also want to pick up one of these toys for yourself. It would look fantastic displayed on your shelves next to your favorite comic books! 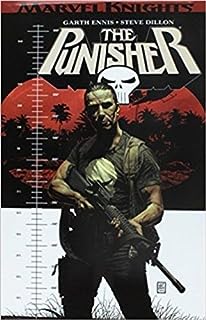 Many writers have written The Punisher, but there are few that have received the same level of acclaim as Garth Ennis. This large omnibus collects many of Ennis’ Punisher stories, including “Punisher Kills the Marvel Universe” and the Marvel Knight’s Double-Shot. This is a heavy-duty 1,136 page collection that weighs 6.24. Like many Garth Ennis comic books, this is geared towards more mature readers. Although there is a lot of violence within the pages of the omnibus, there’s also plenty of humor. The Punisher isn’t a traditional hero, which is why he has such a large following with comic book readers. 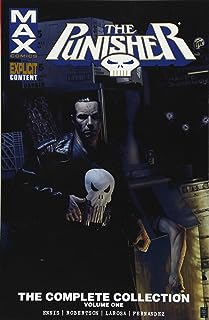 If you love the gritty atmosphere of the Punisher comics, you’re going to love Punisher Max even more. This collection provides an even darker take on this classic antihero. The collection goes into the origins of Frank Castle and has him face off against some formidable foes. This collection features Born 1-4 and Punisher 1-12. It spans 424 pages in total. The story, which is written by acclaimed writer Garth Ennis, is aimed at more mature comic book fans. This collection also features incredible artwork from a variety of artists. Whether you’re a fan of Punisher Max or have never read the series before, this is a must-read. 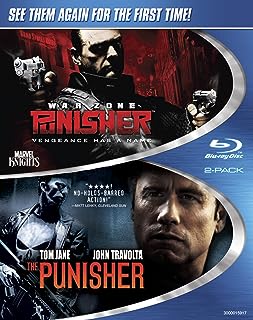 What’s better than watching a Punisher movie? Watching two Punisher movies! This dual pack includes both The Punisher and Punisher: War Zone. These films, which feature stars like Thomas Jane and John Travolta, tell a comic book story that doesn’t involve any superpowers. Since you’ll be getting two movies for the price of one, you’ll have plenty of entertainment to enjoy! The total runtime of the two movies is 3 hours and 46 minutes. You can choose to watch them one at a time or do a double-feature. You’ll really enjoy watching this movies and following Frank Castle on his quest for vengeance. 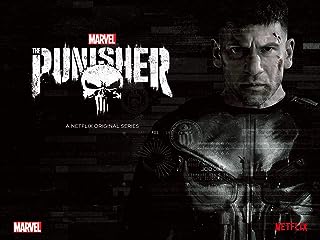 Frank Castle’s family was murdered. Now, he’s looking for answers — and vengeance. Season one of this Marvel show spans 13 episodes in total. Although this violent show isn’t family friendly, it is a gripping and action packed series that will keep you on the edge of your seat from start to finish. If you didn’t have the chance to catch this series on Netflix, or if you’re interested in watching it again, you’ll want to rent or buy this season of television sooner rather than later. It also features some crossovers with other Marvel comic book series, like Daredevil. 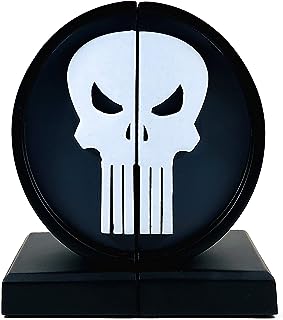 Need a better way to display your favorite comic books? This Punisher-inspired set of bookends is the perfect option! The bookends stand at 6″ tall and are hand-painted. This is a limited collectors item, and only 3,000 bookends have been made. When you purchase your bookends, you’ll receive a certificate of authenticity. These bookends are very sturdy and will really stand out on your shelves. They’re also strong enough to support heavy books like omnibuses. If you’re a fan of The Punisher, you’ll definitely want to have this collectible set of bookends sitting on your shelves! This is also a great gift for comic book fans. 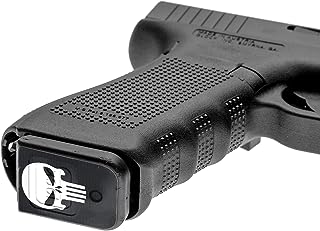 These vinyl pistol skins are designed to conform to the shape of your pistol. The vinyl wrap is easy to install, and you should be able to do everything yourself with minimal issue. There are a number of appealing designs available, including skins that feature The Punisher logo. The skins are waterproof and have a non-reflective matte finish. They are easy to remove and won’t leave any sort of residue behind. The skins even come with a lifetime warranty, which means that you can trust that the wrap you’re buying is durable. This is a great way to customize your pistol. 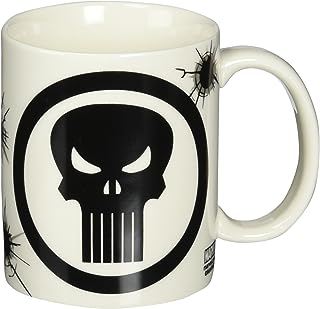 This Punisher mug is straight and to the point, just as Frank Castle himself would probably like it. It holds 11 and a half ounces of your favorite beverage, and the deco features the trademark skull emblem alongside the classic Punisher logo you’re likely familiar with from the comic books. These are lasting bits of imagery that are sure to get you amped up if you’re a longtime or even newer fan of the character. Thanks to the ceramic material, you’re also sure to get a lot of years out of this beauty. The cherry on top of course is the incredibly low price of only around 6 bucks! 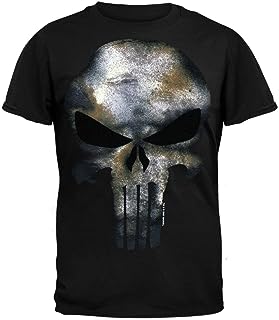 The Punisher logo is iconic. It’s easy to recognize, even if you’re not familiar with this Marvel comics character. Now, you can show that you’re a fan of The Punisher with this great black t-shirt. The shirt, which is made from 100% cotton, is officially licensed and made in the USA. It’s machine washable, which means it’s easy to care for. The shirt is available in two different styles, which are both variations on the classic Punisher logo. No matter what style you choose, you’re sure to get plenty of compliments from people that love The Punisher as much as you do! 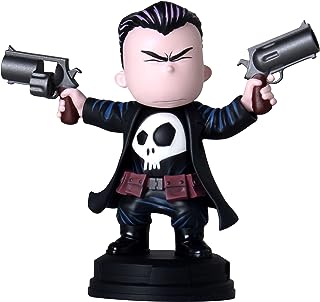 This Punisher Animated Statue is a limited edition, digitally sculpted statue that was hand cast in holystone. It is also completely hand painted with eye popping details that you don’t want to miss. Even though the Punisher or Frank Castle is known to be one of the most dangerous and unforgiving characters, this statute certainly brings out his adorable side. This statue was made using the best 3D printers with a high resolution print that sets it apart from the other mini statues in this category. It is truly a collectors item that you must have if you’re a fan of the Punisher! 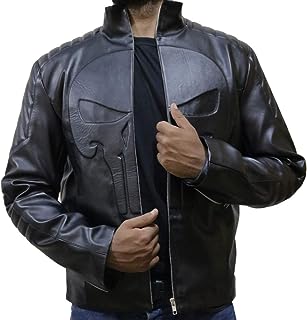 Whether you’re dressing up as Frank Castle for Halloween or want to include a little more of the Punisher’s style in your everyday life, you’re going to love this jacket. Made from high-quality synthetic leather, the jacket features a distinctive embossed skull. There are plenty of other appealing details as well, such as the lines on the sleeves of the jacket. It is fully lined and highly durable, which means you should be able to wear this jacket for a very long time. It’s also very warm, which means you can comfortably wear it even as temperatures start to drop. 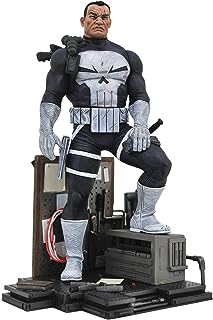 The Diamond Select series of 9 inches Marvel statues continues with a knock out depiction of The Punisher. He looks every bit as battle worn as you’d expect, and the plentiful array of weapons and gear lying about shows that he’s far from over. The pose is stoic and plenty powerful, and the face has been sculpted with unique, characterful features. Longtime Punisher fans will also appreciate the inclusion of the classic comic costume. This will display nicely either out of the box or sealed thanks to the large window style packaging. If you’re in the market for a great collectible of this street-level Marvel icon, this is a great pick.