A lot of people think that The Witcher video game which was released in 2007 was actually first but they couldn’t be more wrong. The first book of The Witcher already came out in 1993. The original books were written in Polish by author Andrzej Sapkowski. The books were a huge success and therefore translated in a lot of other languages. With this success a lot of merchandise followed and therefore I took a look on what kind of The Witcher Gifts that you can buy today.

For those who do not know The Witcher. He’s actually called Geralt of Rivia. Witchers develop supernatural abilities during their childhood and they are called upon to hunt wild beasts and monsters. After the success of the books, The Witcher got his very own video game saga and now also his very own Netflix TV series.

The Finest The Witcher Merchandise & Gifts 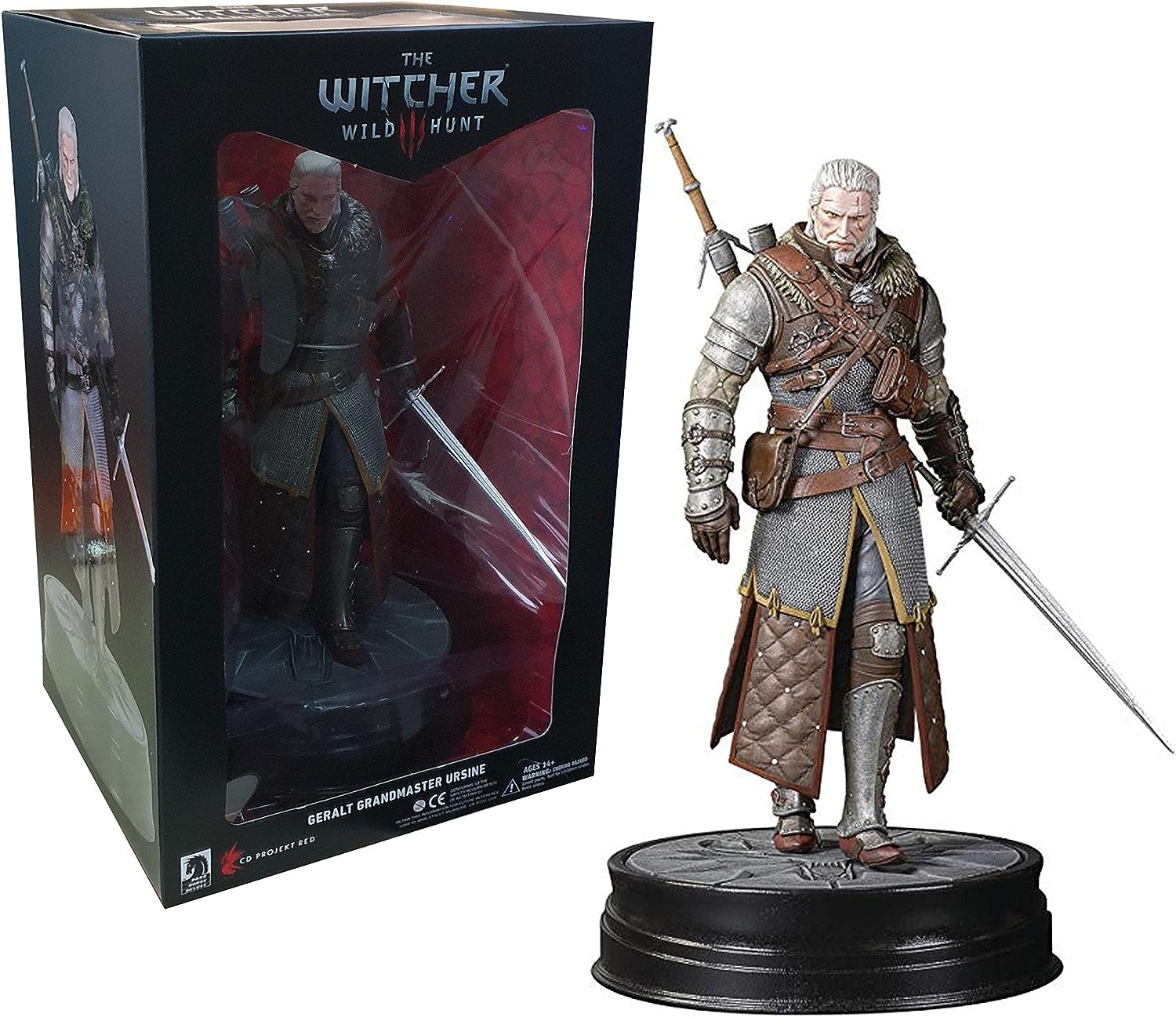 Another entry from Dark Horse Deluxe, this Geralt grandmaster statue is perhaps one of the most stunning Witcher collectibles to date. Though not necessarily for those with the smallest budgets, its pricing is still incredibly humble for an item of its size. The figure stands nearly 10 inches tall, making for an imposing and impressive display. Every detail of the grandmaster Ursine costume and character model has been lovingly recreated, and the pose is equal parts stoic, heroic, lively, and powerful. The packaging is also well designed with a large window that is sure to please the “keep it mint!” crowd. All told, this is arguably one of the best bits of Witcher merch out there. 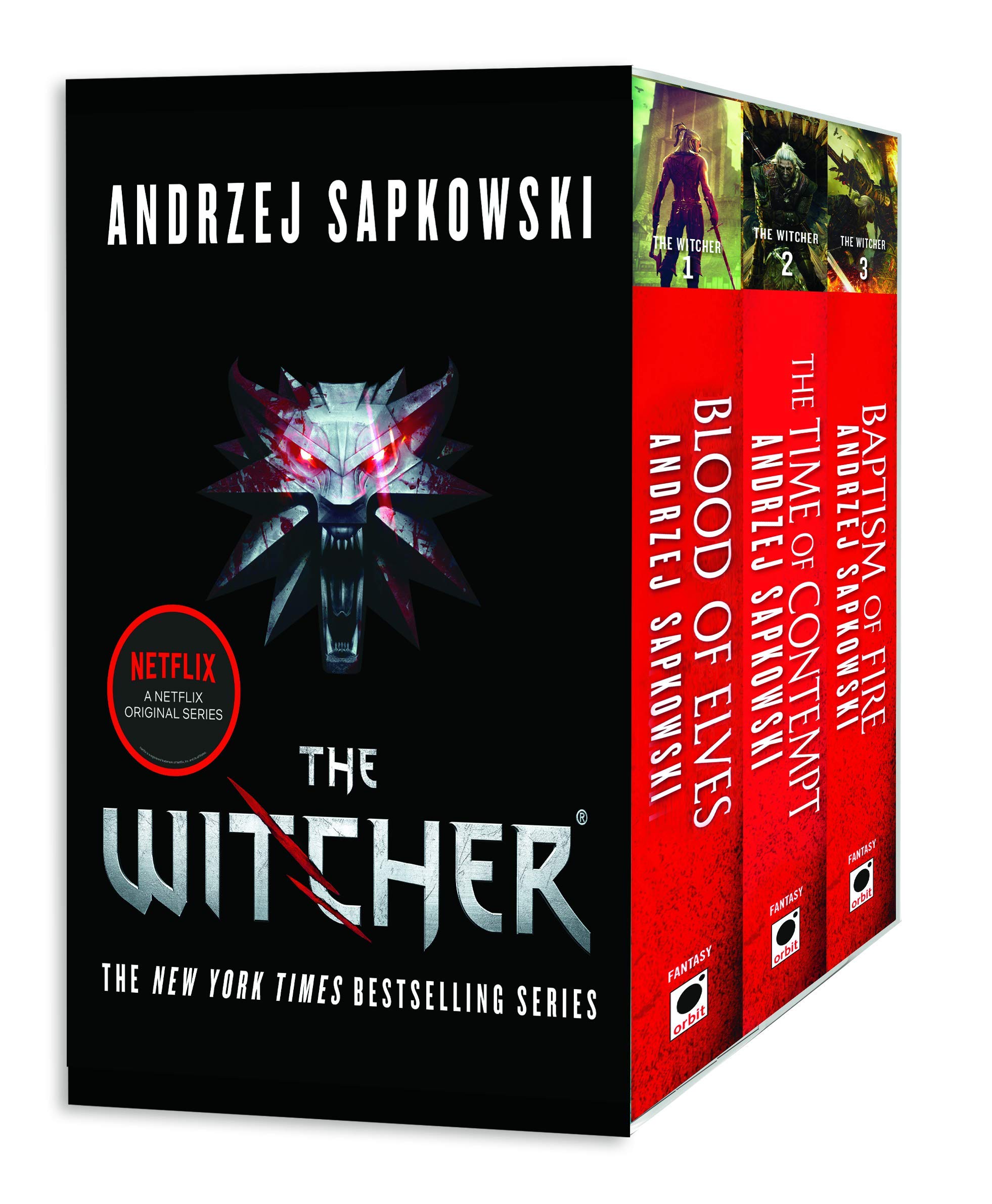 While you may be a fan of the Witcher video game series and Netflix show, the entire franchise originates from a series of short stories and books by author Andrzej Sapkowski. This is unfortunately overlooked given the craze over the later multimedia adaptations. The books themselves have won over plenty of fans all over the world, and they have garnered plenty of critical praise as well. If you are curious to dive into the true origins of the series, this boxed set of the first three novels is the perfect place to start. This collection is comprised of easily read paperback editions that total over 1,000 pages. The price is an absolute bargain, so it’s hard to go wrong here. 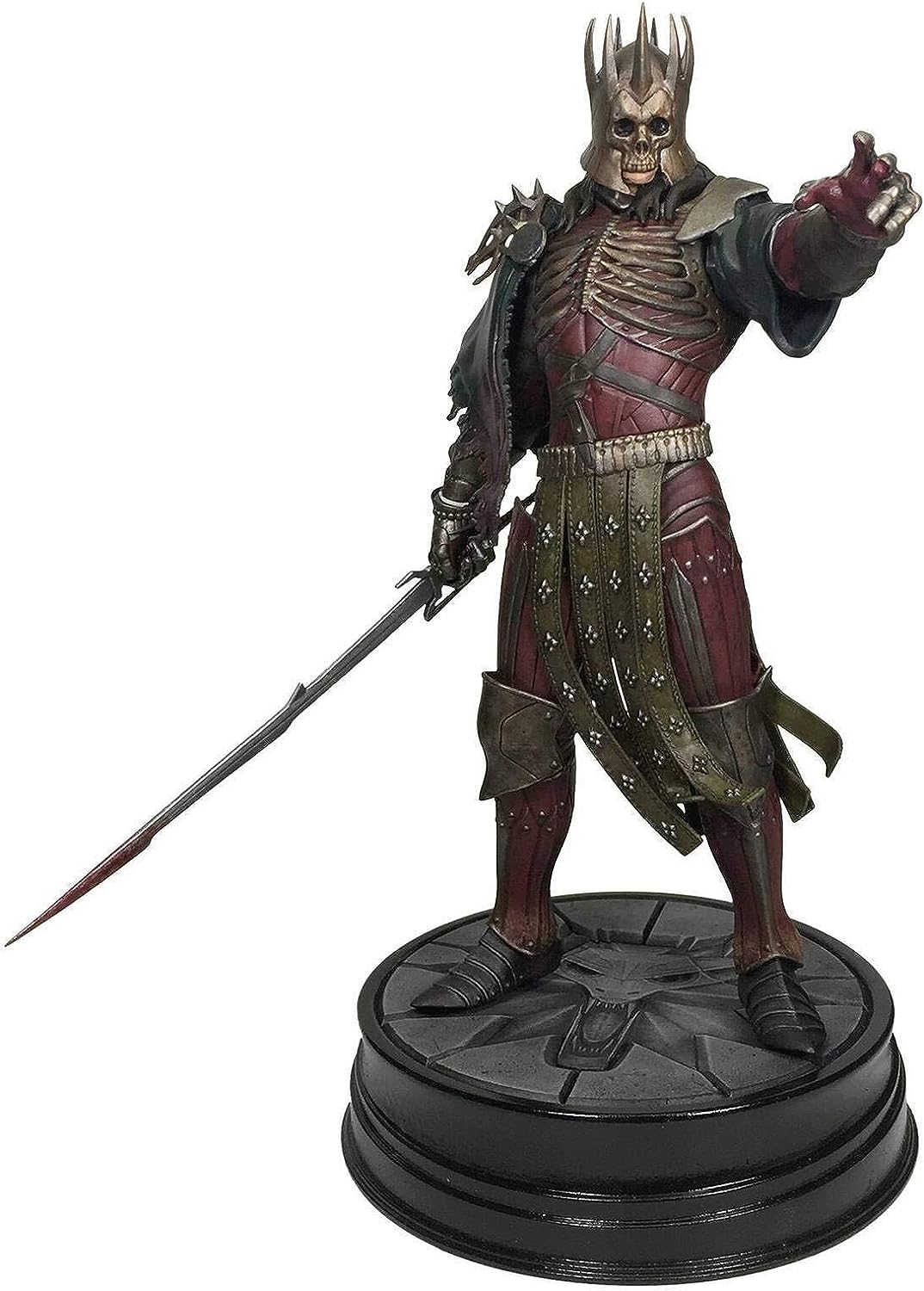 This Witcher Eredin figure from Dark Horse Deluxe is stunning enough to win over any collector whether they are interested in the Witcher series or not. It stands nearly 8 inches on its own before standing atop the 1.5 inch tall base and features immaculate paint work and intricate detailing that brings the game model to life. There’s so much finely sculpted armor plating to entrance even the most indifferent passer by. This is more of a display piece than a traditional action figure, but it has such jaw dropping aesthetics that you definitely won’t mind. Best of all, the price is amazing. 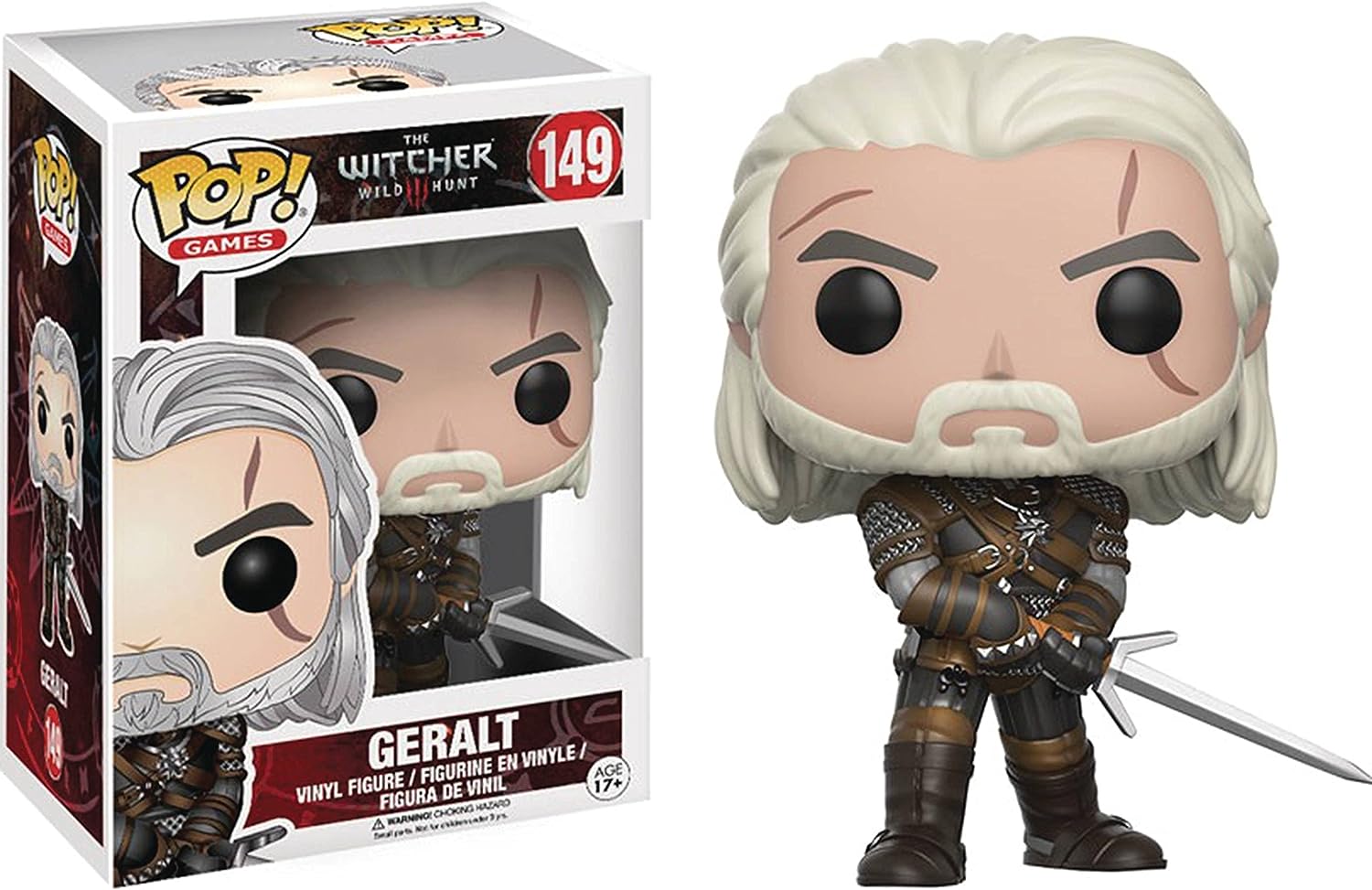 Geralt from The Witcher has been immortalized in Funko Pop form for fans all around the world to collect and adore. And why wouldn’t he be? This is easily one of the most recognizable and popular fictional characters as of late, largely thanks to the incredible craze over both The Witcher III: Wild Hunt and the Witcher television series that followed. With the third iteration of the video game also hitting the Nintendo Switch, an entire new base of fans have hopped aboard the hype train. This Pop figure captures Geralt wonderfully while still retaining the trademark Funko charm. It’s a must-have piece for any collection.

As The Witcher was a huge success as a video game, Netflix decided it was time to bring it to the tv screen. In this show, Henry Cavill who you might know as Superman plays Geralt of Rivia. In my opinion, he does this brilliantly. I really like the show. It can only be very difficult to follow as the different episodes are set in a different time and are not in a chronological order. But do not let this stop you and it is fun to watch even if you haven’t read the books or played the video game. 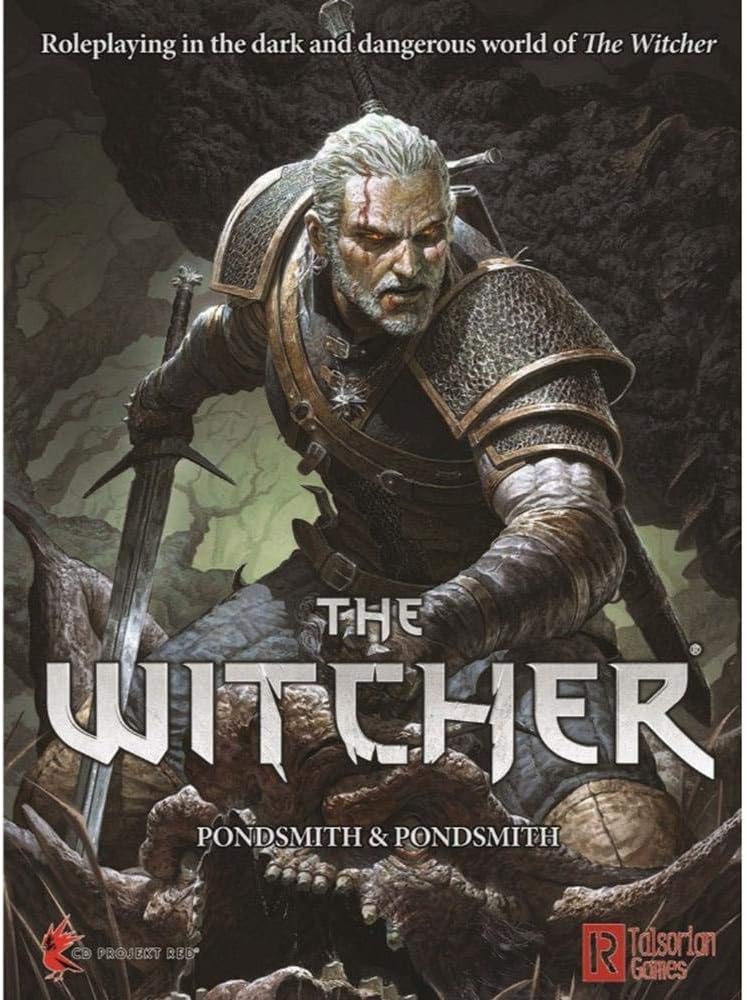 If you can’t get enough of The Witcher but you want to reduce your screen time as you have been playing the game too much. You can always continue offline with The Witcher Tabletop Roleplaying Game. With this game, you can create your own story in the world of The Witcher. Because The World Doesn’t Need a Hero. It Needs A Professional! 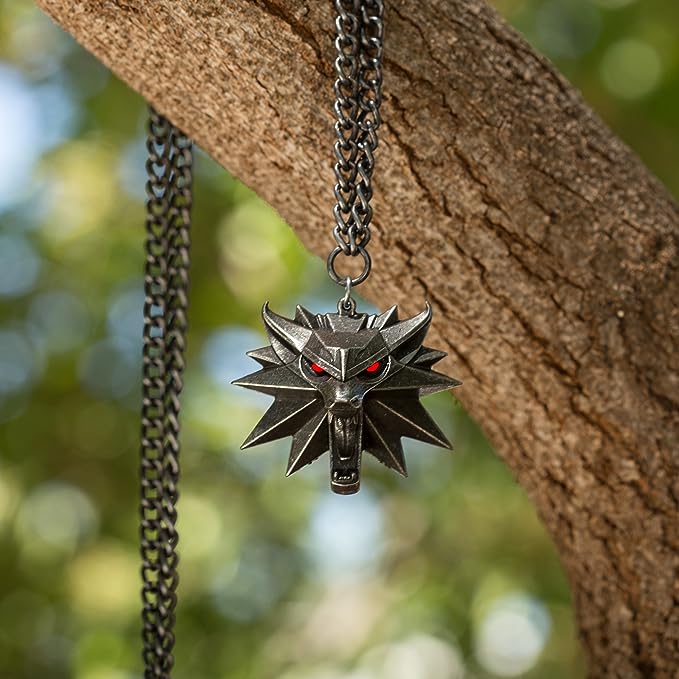 JINX is well-known for its fun gaming clothing and accessories. Their official Witcher 3 medallion features the White Wolf with bright, red eyes. This is no dainty necklace, but impressive, bold and striking jewelry in magnesium metal alloy. It is two inches wide, 1.75 inches tall and one inch deep with a chain that measures approximately 30 inches. One of the coolest facts about this medallion is the wolf’s light-up red LED eyes controlled by the on/off switch on the back of the jewelry. Included with the accessory is a replaceable battery. Men will love it, and so will their girlfriends, fiancees, and wives. It’s also perfect for moms, girls, and teens 17 and up. Give it for a birthday, Valentine’s Day, Christmas, etc. 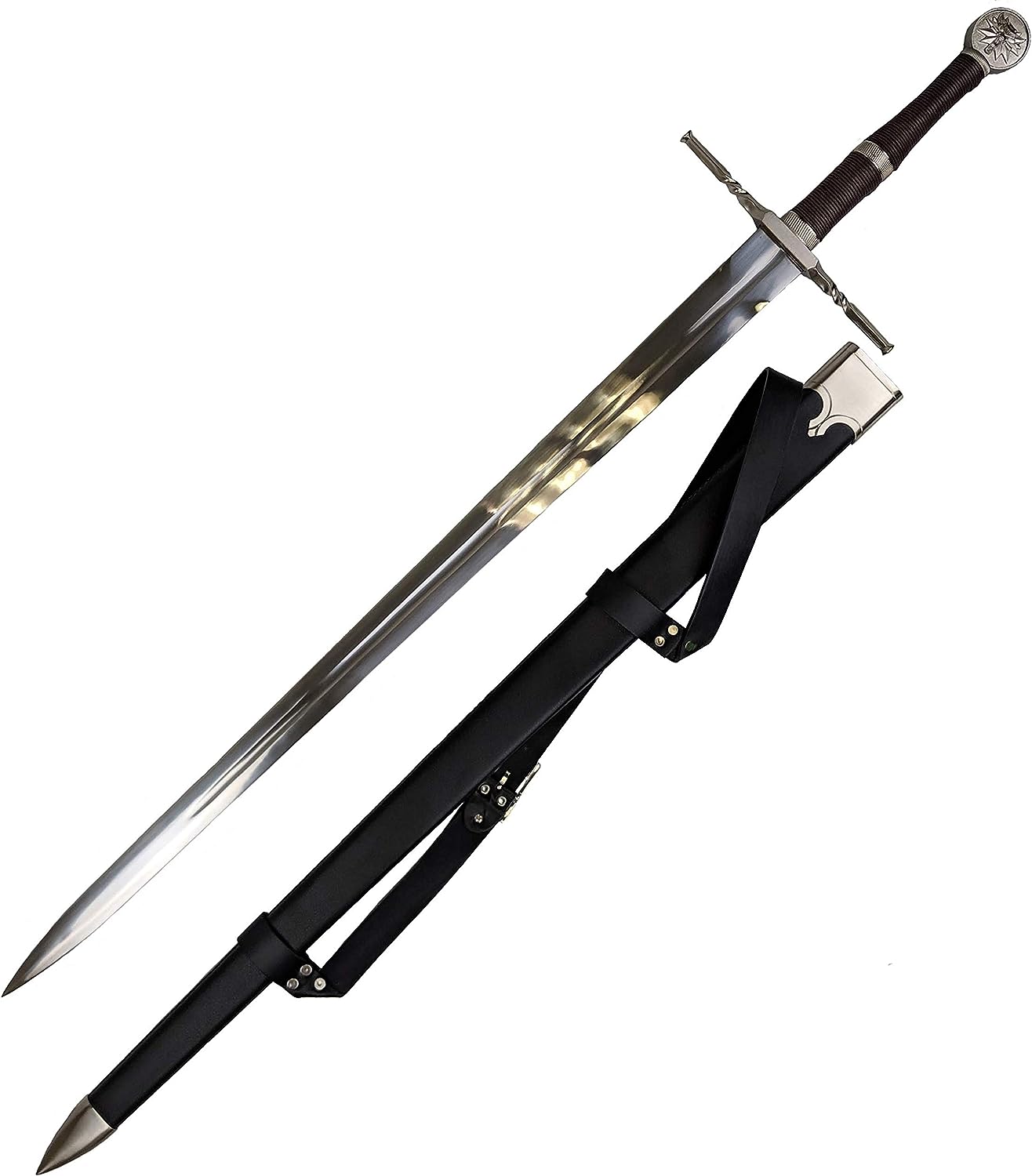 For only the most tried and true fan of the Witcher series, this Geralt steel sword replica is a real marvel. It recreates the exact look of the now famous sword in an accurate 1 to 1 scale. Its total length is 124 centimeters or 48 inches. The blade itself is made of stainless steel, meaning it’s well equipped to keep its aesthetic beauty for many years to come. You can also wield the weapon quite comfortably should you need to do so for a cosplay photo shoot or video. Finally, the sheath is a high quality leather-wrapped wooden scabbard. This isn’t the cheapest item in the world, but it’s not one you’ll want to miss out on if you’re truly serious about your Witcher fandom. 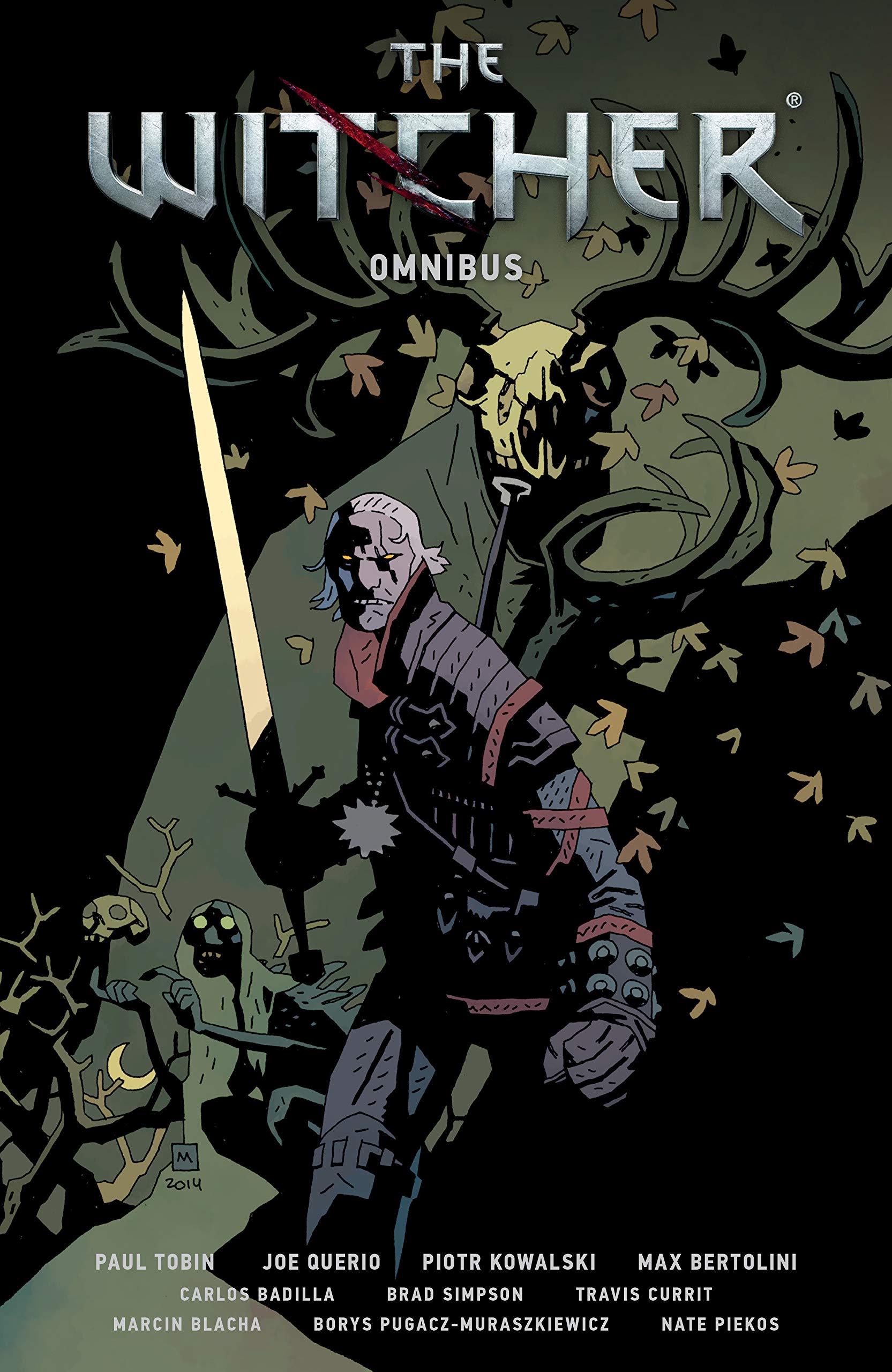 Written by the award-winning Paul Tobin, The Witcher Omnibus is a classic filled with entertaining plots and captivating characters. With issues 1-5 in this collection, readers gain the opportunity to experience an enthralling, immersive narrative with all the action-packed thrills of the Witcher’s powers. For comic book lovers, this is a masterpiece that brings along with it several heart-racing moments, gorgeous images, and an experience of a lifetime. This is a collection that has been crafted with attention to detail from the riveting dialogues to the colorful images. Everything about this collection is built around bringing the video game character to life in a unique way.

The Geralt Cosplay Costume is a sleek, authentic design with all the elements needed to become the Witcher. With its refined Lycra and PU Leather materials, the attention to detail is easy on the eyes and provides a charming aesthetic anyone can relish. This costume offers a wonderful selection of pieces including the waistcoat, shirt, belt, bracer, pants, suspender, and shoulder pads. Being able to walk around in this gorgeous costume is going to provide a sense of power that’s impossible to beat. It’s breathable, comfortable, and perfect for those who want to appreciate the nuances of Geralt at his peak. 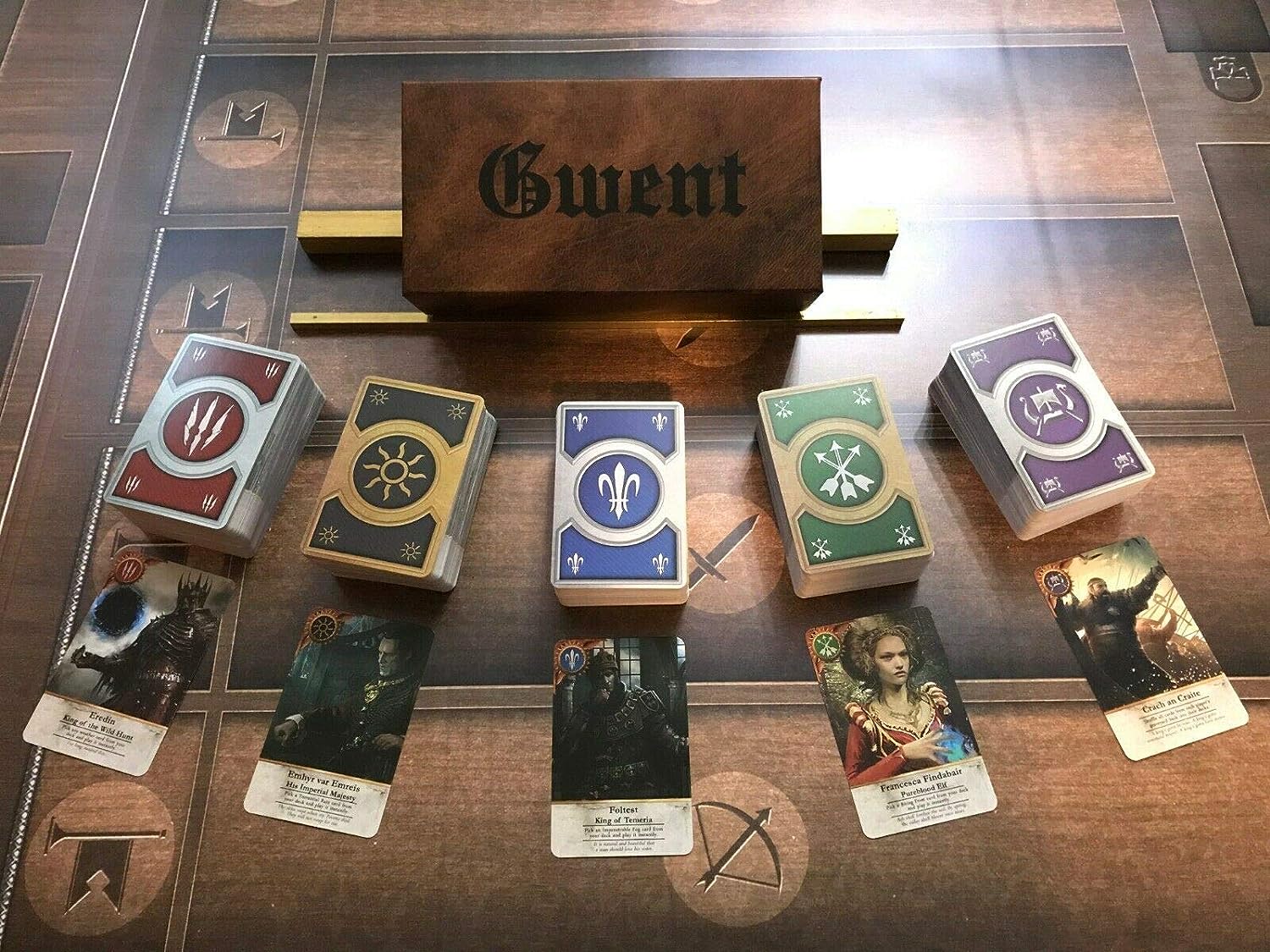 Witch lovers will be thrilled to get this Witcher Gwent Card collectible set. The set includes five full decks for a whooping total of 460 beautifully designed, high-quality cards with a storage box. The Monster Deck counts 94 cards, the Nilfgard deck has 90 cards, the Northern Realms deck has 89 cards, the Scoia’tael deck has 91 cards, and the Skellige deck has 96 cards. If you have played and enjoyed the Witcher games, you’ll find this card game collectible set from Max-One Shop worth the investment. It can be everything you need to enjoy quality time with your family or friends. 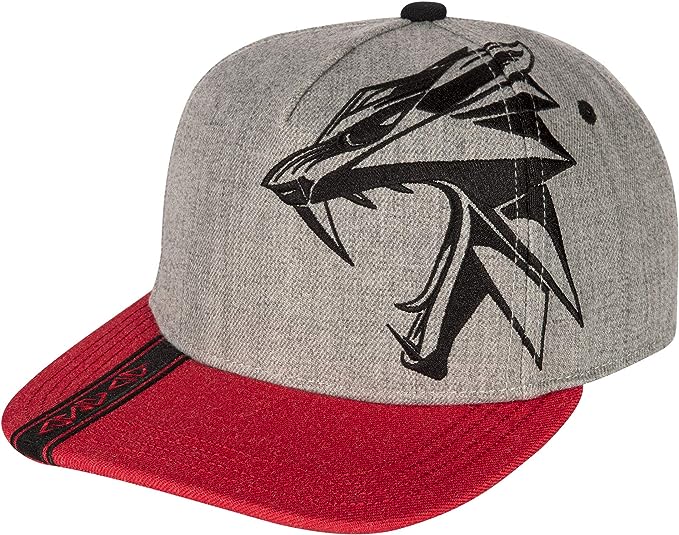 The Witcher Cap is made with 100% polyester (this means the hat is very durable), and it has a snap closure. This is the ideal hat for those who are fans of the Witcher 3, as the hat features the White Wolf emblem right on the front of the cap, and on the brim of the hat there are signs of the Witcher printed right on it. The hat is comfortable to wear, thanks to its universal size, and it has an adjustable snap closure, which allows for a customized fit. If you want a great hat, then look no further than the Witcher Cap. 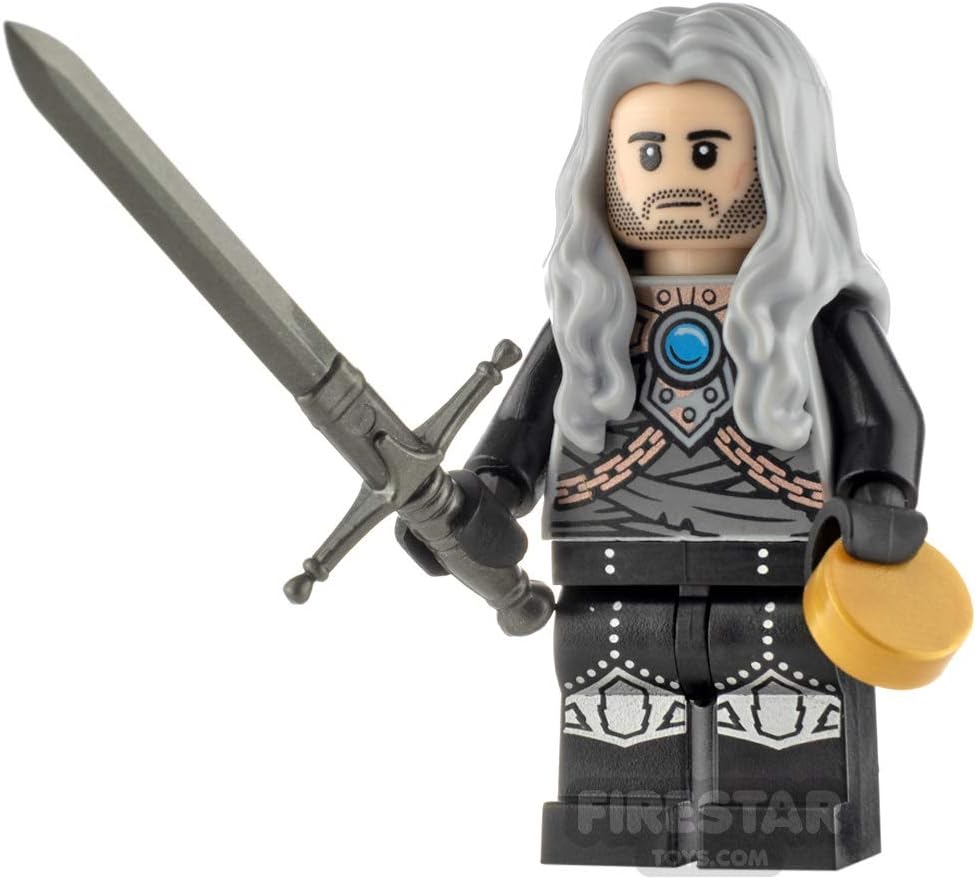 The popularity of The Witcher is ever on the rise thanks to word of mouth regarding The Witcher 3 video game and the recently released Netflix television series. There are a number of books as well of course, but the later multimedia adaptations have really taken the franchise to new heights. Leading character Geralt is particularly popular, with a host of fans growing in number every single day. If you love Geralt yourself or know a superv fan that loves to collect gaming memorabilia, try this custom LEGO Geralt figure on for size. It’s only available from this independent creator, but it uses legitimate LEGO parts and custom printing to provide a high quality sample that’s sure to please.