I absolutely loved the Transformers growing up. So I got absolutely psyched when I found out that they were going to start making Transformers movies and yes, they are brilliant. Especially the first ones. The special effects are just amazing! 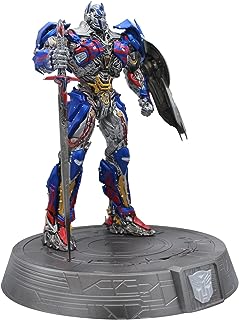 Transformers Statue Phone Dock For the Transformers super fan that has just about everything else, this is a way for them to charge their cell phones in style! Available in both Optimus Prime and Megatron forms, the Transformers Statue Phone Dock is an attractive alternative to merely plugging in via a simple old USB port. This charging dock does its job effectively and the “statue” portion is true to its name with incredible detailing that’s highly accurate to the films. You’ll need to make sure your phone is compatible before you purchase, but some of the most common models supported include the iPhone X, 6, 6S, Google Pixel2, Galaxy S8, and so on. The slot on the base is 3.25 by 0.50 inches, so check your model’s size and you should be good from there. 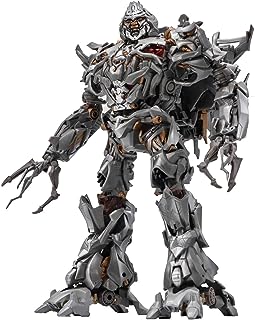 Megatron Masterpiece 12″ Action Figure Though sometimes contentious within the Transformers fan community, the 2007 live action Transformers film bolstered significant interest in the franchise thanks to its massive success. As earnings poured in, it paved the way for more and more products and media down the pike. At the forefront of it all of course were the titular robots themselves. Though sporting new looks, old standbys like Optimus and Bumblebee were there, alongside none other than the villainous Megatron. The fearsome Decepticon leader has been faithfully recreated here in plastic form, with incredible detailing and engineering. If you like the aggressive alien aesthetic of the live action Transformers, this figure is not to be missed. 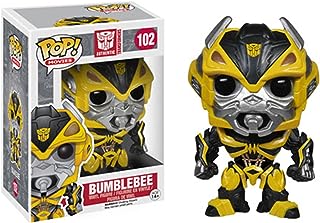 Funko Bumblebee This toy is a true paradox. The Transformer designs in the live action Michael Bay films are anything but cute, and yet Funko has managed to make the Age of Extinction Bumblebee exactly that! All of the primary details are represented of course, but the proportions have been exaggerated into that of the standard Pop vinyl buck that countless collectors have clamored for over the last several years. Whether you are looking to own every single release in the line or you are simply a fan of the Transformers franchise and its billion dollar-earning movies, this is yet another must-have item. 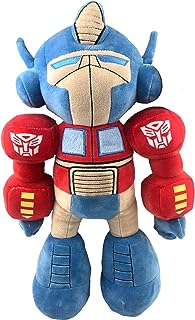 Transformers Optimus Prime Plush Coming in at an impressive 17 inches, this large Transformers Optimus Prime plush is an adorable collectible for fans of any age. Children are sure to love playing with him, and older fans can easily find room for him on their shelves or the likes of a gaming room couch. The material is high quality and perfectly suited for cuddling up with. Of course, tried and true franchise fans will be swayed by looks alone; while showcased in a cuter and cartoonier aesthetic than usual, the design used is a near 1 for 1 recreation of the original Optimus from 1984. What’s not to love? 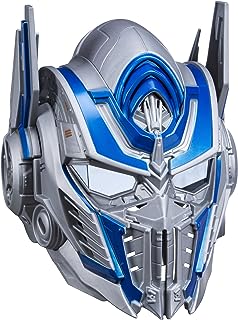 Optimus Prime Voice Changer Helmet As proven by the likes of the ever popular “Hulk Hands”, Darth Vader helmets, and endless Spider-Man masks, roleplay items are always a winner. They help kids live the fantasy of being the characters they love while also making for the centerpiece of the latest, greatest Halloween costume. This Optimus Prime voice changer helmet is a perfect example. Sized large enough to accommodate adults as well as kids, there’s a lot of fun to be had with this beauty. Though only made of plastic, it is durable enough to withstand hours of use and it is adjustable enough to remain comfortable throughout. The altered voice output is deep and digitized, which makes for a convincing effect. Any Transformers fan young or old will love this!

Transformers: Exodus: The Official History of the War for Cybertron 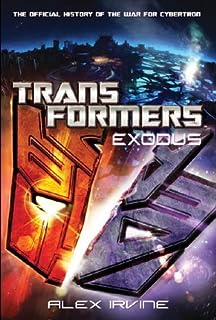 Transformers: Exodus: The Official History of the War for Cybertron Fans of Transformers will be highly impressed with this book from Alex Irvine, which was designed to serve as a prequel for the video game “War from Cybertron.” The book details the fictitious history of the Transformers, discussing topics like the AllSpark as well as fleshing out popular characters like Optimus Prime and Megatron. Even though this text is focused on Transformers lore, it’s far from a dry history text. This is a lively, fast-paced story that will remind readers of classic Transformers cartoons. This is a must-read for anyone that loves Transformers, and it’s also an excellent gift for long-time fans of the series. 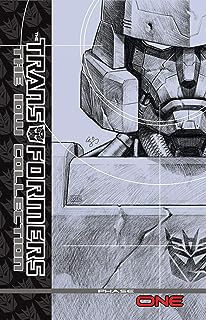 Transformers: The IDW Collection While the 1980s Marvel series established The Transformers as a viable serialized comic book property and the early 2000s Dreamwave run brought it back into the limelight, it can be argued that the IDW series is the closest to perfection. With some of the best writing in the history of the franchise and a wide array of dazzling artists, you need look no further for quality TF storytelling. For those that missed out early on, this collection is a great way to start catching up. It compiles issues 1-6 of Infiltration, issues 1-4 of Megatron Origin, and 6 of the incredibly popular Spotlight stories. Available in hardcover form or digital, this is must-have material for Transformers fans and comic book readers in general. 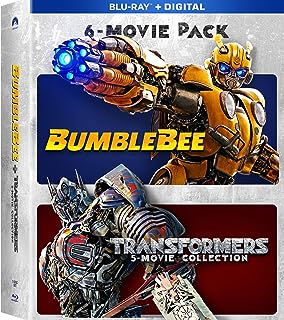 Bumblebee & Transformers Ultimate 6-Movie Collection There’s no denying the incredible success of The Transformers in the realm of the summer movie blockbuster. Since 2007, the franchise has been a powerhouse at the box office. The first 5 films directed by Michael Bay have some of the most intense action set pieces of any Hollywood production from the last decade and a half, and the soft-reboot Bumblebee solo film acts as a breath of fresh air with its slightly lighter tone. If you’re just now building your movie library, the Bumblebee & Transformers Ultimate 6-Move Collection is the best way to add the series to your collection.

The Transformers: The Complete Original Series 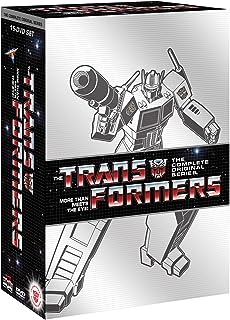 The Transformers: The Complete Original Series This is where it all started. If you’ve enjoyed any iteration of The Transformers over the past few decades, the original 1980s cartoon series is undoubtedly the earliest smash success of the franchise. Its colorful characters and intriguing lore sparked the imaginations of kids everywhere. This helped drive incredible sales figures for toys and other merchandise, and the property has lived on as a massive success to this day. Though sometimes low in budget and rushed off the production line, the original show is well worth watching. The cast and their voice actors are as memorable and iconic as any from the entirety of the 1980s, and their antics are endlessly charming. This DVD set includes all 4 seasons with the best possible picture quality available, making this an essential purchase for any Transformers enthusiast new or old. 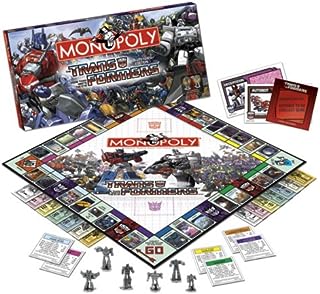 Transform Your Monopoly Experience With The Transformers Collector’s Edition Monopoly Transfomers have become part of the mass imagination through the wonders of the silver screen – but now you can be part of that experience – and enjoy one of the most popular board games in the world as well. The Transformers Collector’s Edition Monopoly. The board game includes pewter tokens like Optimus Prime, Megatron, Soundwave, Jazz, Starscream and the beloved Bumblebee (himself a star of his own movie). However, this is not only Monopoly rebadged. There are some unque attributes to the game, the special card decoder allows players to access the directives on what once were the usual ‘Chance’ and ‘Community Chest’ cards (in the traditional game). The chance to draw Autobot or Decepticon abilities allows the players to gain the upper hand over opponents. This is Monopoly for the 21st Century – get ready to battle. 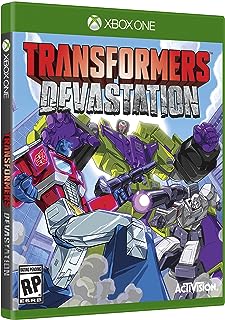 Transformers Devastation If you’re a gamer with a life long passion for the Transformers franchise, Transformers Devastation is an absolute dream come true. It features dazzling character models that look as if they were ripped straight out of the 1986 animated film with all the stylized anime lighting you could hope for, original voice actors Peter Cullen and Frank Welker in their respective roles as Optimus Prime and Megatron, and intense action the likes of which only developer Platinum Games can deliver. Fan favorite characters like Bumblebee and Grimlock are playable, there’s an amazing soundtrack, and the boss battles are top notch. If you missed out upon the initial release, now is the perfect time to get caught up. You won’t regret it. 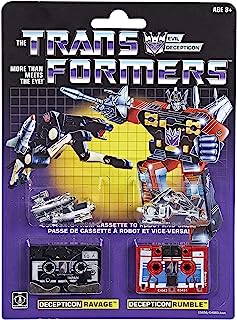 Transformers: Vintage Cassette 2-Pack Within the Transformers franchise, no characters are more beloved than the initial cast from 1984. Each one is easily among the most recognizable and iconic, and Decepticon Ravage and Rumble are certainly no exception. Available here in a vintage styled 2-pack, this duo honors the original toy releases in near-perfect fashion. Buying the original 80s version “mint on card” would be incredibly expensive at this point, making this modern re-release an incredibly attractive alternative. Each micro-cassette is compatible with the original Generation 1 Soundwave figure, and they are also plenty of fun on their own. If you grab this, be sure to track down their cohorts Frenzy and Laserbeak as well! 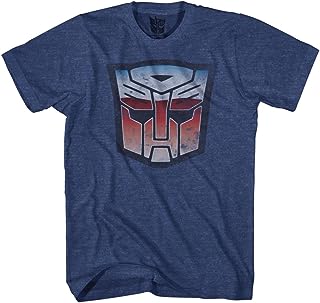 Transformers Shirt When it comes to the iconography of the Transformers franchise, the ultimate pervading piece of imagery is undoubtedly the Autobot faction symbol. It has graced several of the series’ primary logos throughout the years as well as innumerable bits of merchandise and advertising tie-ins. If you like graphic tees that allow you to flaunt your interests for all to see, this Autobot sigil Transformers shirt is the way to go when it comes to the topic of your favorite transforming robots. The shirt itself is of high quality and the officially licensed print is slightly distressed, adding a perfect retro feel. Simply put, every TF fan needs one! 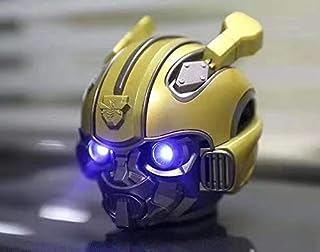 Bumblebee Bluetooth Wireless Speaker Perfect for any kids’ bedroom or even the “man cave” of an older Transformers die-hard, this Bumblebee Bluetooth Wireless Speaker is an adorable alternative means of listening to music or podcasts. It has Bluetooth connectivity as well as good old fashioned FM radio. The battery life will last around 8 to 12 hours, and it works well as a companion to any mobile device. For its price range, you will also find the volume and frequency response more than adequate. The real attraction of course is the incredibly well rendered Bumblebee casing; it perfectly recreates the head design from the audience pleasing 2018 Bumblebee movie. 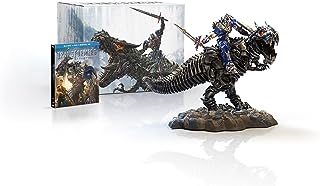 You May Not Be A Hollywood Fan – But The Transformers: Age of Extinction Figurine Will Blow You Away The Age of Extinction movie wasa Michael Bay extravaganza. Plenty of eye candy kept the viewers in the seats with an accompaniment of oohs and aahs. But there were critics – however no one could be critical of this collectible set featuring Grimlock and Optimus Prime. The one piece resin depiction of Optimus ispsot on – and the detailing is exquisite. It is simply perfect for those who want to see c rossover between dinosaur and robot (and what could be better?). This set is made for those who not only loved the movies – but the mythos of the Autobots themselves.