Venom is one of my all time favorite bad guys. His powers are awesome and I just love how the way he talks. Apparently, I am not alone as he got his own movie starring Tom Hardy. I was so happily surprised with the great amount of cool Venom merchandise that is available these days.

Ok, it is not as much as Spider-Man but you can already find some very cool statues, books and masks. All these Venom gifts are a great addition to the rest of the Marvel merchandise that is available. 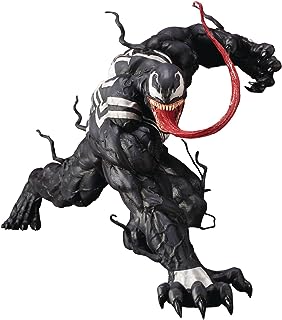 Sturdy and created with great attention to detail, this is one of the best Kotobukiya’s Marvel Now! ArtFX line statues. The character appears massive, thanks to its intimidating pose and to its striking details such as the marks on the teeth and on the tongue, the muscles and the blood vessels, the claws, and the symbiote pieces raising from the body. The pop on put together statue is made from a very durable, scratch-proof material. It is a must-have for any serious collector, but also for those who enjoy creating battles scenes showcasing their favorite comics heroes of all times. 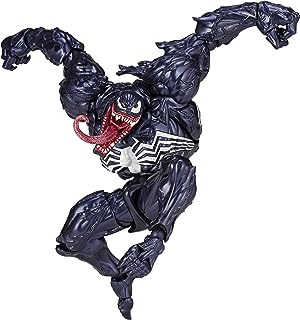 The Revoltech action figure line has always been known for its stylish sculpts and “better than average” articulation. The Amazing Yamaguchi subline has taken all of this to the extreme with incredibly dynamic proportions and a wealth of deeply cut joints that allow for all kinds of creative action poses. This Venom Yamaguchi action figure is one of the best examples; it features a highly stylized portrayal of the world famous Marvel antihero. If you’re a big fan this is going to be right up your alley, and action figure collectors in general have a lot to love here. With a number of alternate parts, accessories, and looks that kill, this is easily one of the best pieces of Venom merch out there. 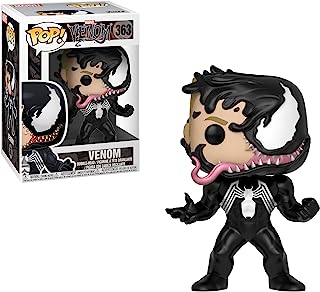 An iconic villain, Venom, or Eddie Brock now comes in a Funko Pop toy figure! It’s an excellent choice for both display and/or play and is a must-have piece of collectible to all Spiderman and Venom fans. Comes in a stylized collectible stand, this collectible figure stands approximately 3.75 inches tall making it the absolute match to all Marvel fans, and a perfect addition to your beautiful display stands! This figure’s sculpt alone is amazing, highly-detailed with Venom’s black skin slowly creeping and taking over Eddie’s face. Funko Pop has made a stylized, yet a cool depiction of both Eddie Brock and Venom, for Marvel fans to completely adore! 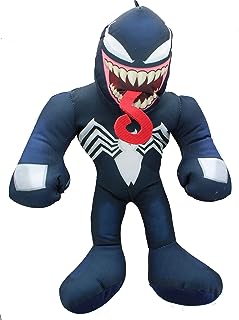 It’s a good idea to buy a Venom plush if you’re a fan of the character. This character is generally pitted against Spider Man and he looks awesome in terms of comic characters. This 9 inch plush features Venom in a more cute way than he’s portrayed in the comics. But, he still looks like the bad guy we’ve all come to love so it should be a hit with those who are into the Marvel comic universe. This plush was made with quality in mind and will last a long while so it makes a great gift and collector’s item. 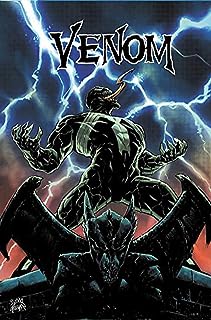 Venom is one of the most popular characters in comics history. Now, fans can see even more of their favorite symbiote in the amazing comic adventure. This story, which is written by Donny Cates, is loosely inspired by Beowolf, a medieval epic poem. The comic dives into the history of symbiote and even features Miles Morales. It also introduces a brand new character: Knull, the God of the Void. It also has incredible art from Ryan Stegman and will keep readers thrilled from start to finish. This paperback collection spans 136 pages. The adventure is concluded in Venom Vol. 2. 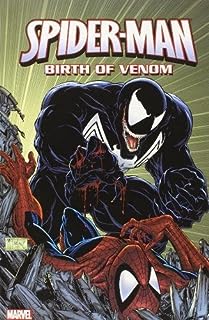 Spider-Man: Birth of Venom is a 352 page collection of the original comic stories wherein the wildly popular antihero Venom was born. Starting all the way in the Secret Wars saga where Spider-Man received his symbiotic black costume and ending with a showdown with new host Eddie Brock in the main Amazing Spider-Man and Web of Spider-Man books, this will catch you up on how the entire sensation began. These are classic stories by now, with lots of fun writing by the likes of John Byrne, Louise Simonson, and David Michelinie, as well as top-notch art from Ron Frenz, Todd McFarlane, and more. No comic collection would be complete without this story-line, and this paperback is one of the best ways to enjoy it. 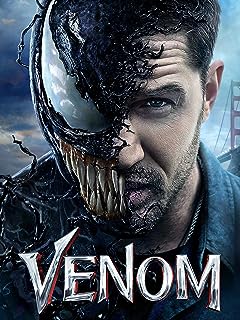 This movie showcases Tom Hardy as the dreaded Venom, one of the most intriguing and the most memorable characters of the Marvel brand. The story holds on its own very well, so one doesn’t need to be up to date with all other Marvel’s characters or movies. Venom’s dark humor in the comics spices up the movie is a brilliant and captivating manner, thanks to Tom Hardy’s impressive versatility and to his ability to depict the strong symbiotic relationship between Eddie Brock and Venom. The movie is available for online streaming, as well as in Ultra HD Blu Ray format. 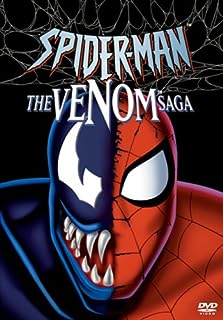 Venom is one of Spider-Man’s most famous foes. Now, you can experience all the thrills of this story in this animated adventure. This collection features the complete Venom Saga from the popular ’90s cartoon. It includes five episodes: “The Alien Costume” parts 1, 2, and 3, “Venom Returns,” and “Carnage. The total runtime is one hour and 55 minutes. In addition to the saga, there is an 11-minute video from Stan Lee as well as optional introductions for every episode. Whether you enjoyed this cartoon when it aired or have never watched it before, this collection is a must-see for any fan of Spider-Man. 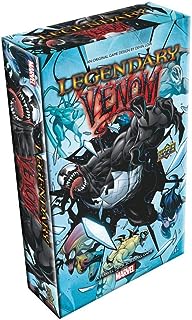 Legendary is an incredible deck-building game that takes place in the Marvel universe. While the base game allows players to select popular Marvel characters, like Spider-Man, Wolverine, and Magneto, this expansion revolves around another Marvel character: Venom. Of course, Venom isn’t the only character that appears in this expansion. It features a total of 5 heroes, 2 villain groups, and 2 masterminds from the Venom-verse. The set also features 4 schemas. The set includes 100 playable cards in total. Cards feature incredible original artwork from popular comic book artists such as Matthew Yackey and Iban Coello. Users will need the core Legendary set in order to play with this expansion. 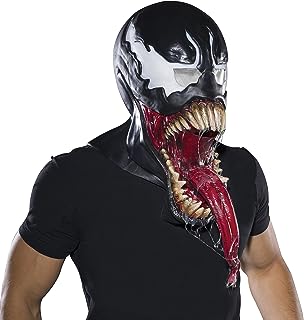 This latex mask is everything you need to make heads turn at your next Halloween or costume party. The mask is officially licensed by Marvel and it is available in one universal size that fits most adults and teens. The latex drool and the huge tongue hanging over the scary teeth create an extremely realistic Venom effect. The oversized style is fun, but it requires the stuffing of the mask with a hat or a small blanket. The mask pulls over the head, as it doesn’t have a slit. It works best with one of Rubie’s licensed costumes or with a fully black outfit. 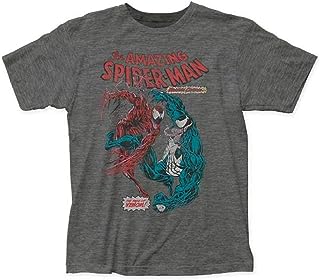 Carnage and Venom have fought in some very well known comics over the years. If you want a shirt that looks cool and features both characters, this is the shirt to go with. It has a nice vintage comic look to it so you’re sure to find it to be a hit with comic book fans from a long time ago or even those that read them to this day. Also, you’ll find that this shirt comes in sizes that range from small to extra large. Pick this out as a gift or buy it for yourself if you’re into the characters on it! 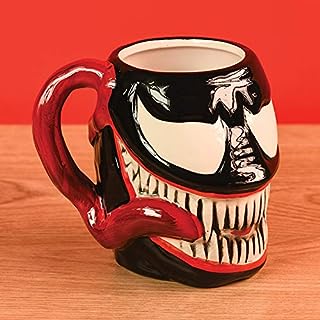 This 3D sculpted ceramic, red, white, and black Venom mug is officially-licensed Marvel merch and has an integrated tongue handle, which gives it a unique design. It comes in a sturdy cardboard display box, making it an easy-to-wrap gift for all fans of the classic Marvel Comics character. What’ more, with an 18oz capacity, it can hold a large portion of the gift recipient’s favorite hot drink, such as coffee, tea, or hot chocolate. Many would say, however, that this face of Venom mug is better used as a great fandom display piece, as buyers should be aware that it’s hand-wash only. 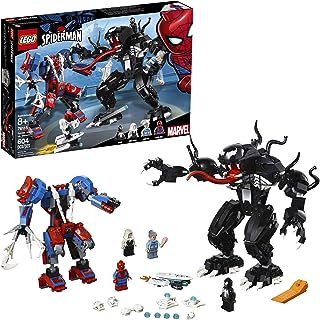 This is a playset your kids will love. It includes four Spider-Man action figures, including a Venom and a Ghost Spider. This Lego set comes with a lot of toy weapons, stud shooters, and a hover board, thus allowing the easy customization of the builds. The set contains 604 pieces, so it has the potential to keep kids busy for countless hours, as they will create battle scenes and full stories showcasing their favorite characters. The Venom character stands out thanks to its impressive look. The other characters in the set are nothing short of impressive. The assembly instructions are clear and easy to follow. 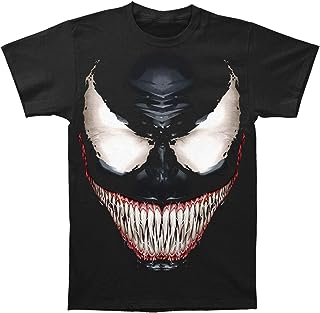 This is a soft, high-quality t-shirt that features a prominent graphic print design on its front. The image takes up the whole shirt, thus making a very powerful impression on the viewers. Available only in black, this jersey tee is true to size and it comes already preshrunk, so you can safely wash it without fearing that it won’t fit you any longer. The fabric is 100% cotton and it holds up very well, with no fading or distortion issues. This officially licensed Marvel brand shirt can make the perfect gift to any comics fan, regardless of age. It surely has the power to set one apart from the crowd. 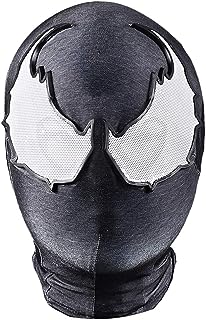 Get to enjoy and cosplay as Venom, one of the antagonists in the Spiderman series with this zipper closure full mask. It zips at the back making it easier to wear on and off. Although this mask fully covers the head, features a breathable material making it comfortable to wear for longer periods – even contours the wearer’s head. With elastic materials in place, this cosplay mask is available in two sizes, from small kids to kids at heart. Vision isn’t impaired as you can see clearly without having the worries of fogging up your vision. Great for costume parties, and makes an amazing gift for a friend, or for yourself.